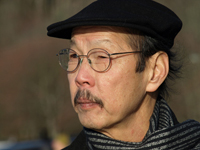 When my first book was published in 1975, I listed myself as Frank Ching. I still remember my mom telling me sternly that I should have used my given name and, being an obedient son, I have used Francis D.K. Ching ever since on my books. But still, to family and friends, I am more commonly known as Frank.

I was born and raised in Honolulu, Hawaii. At 17, I left for the University of Notre Dame, where I graduated with a Bachelor of Architecture degree. After a stint in the military, several years of professional practice, earning licensure, and serving in VISTA, I began my teaching career at Ohio University in 1972. Since then I have taught beginning design studios and drawing courses at the University of Wisconsin-Milwaukee and the University of Washington. The lessons learned while teaching resulted in my writing and illustrating a number of books on architecture and design, all published by John Wiley & Sons. Some have even been translated into foreign languages.

Although retired from active teaching, I continue to write, draw, and offer the occasional drawing workshop. While I enjoy using digital technology, I still savor the lyrical feel of a fountain pen nib on paper when drawing on location, from direct observation.