Mike and Patti Sherlock started making rye whiskey in the late 1990s from a recipe from the journals of John Jacob, an immigrant from Holland and Patti’s great-grandfather. When Washington state passed the craft law in 2008, Mike and Patti founded Fremont Mischief Distillery. Here is a view of the distillery with its retail shop and tasting room fronting the Ship Canal. 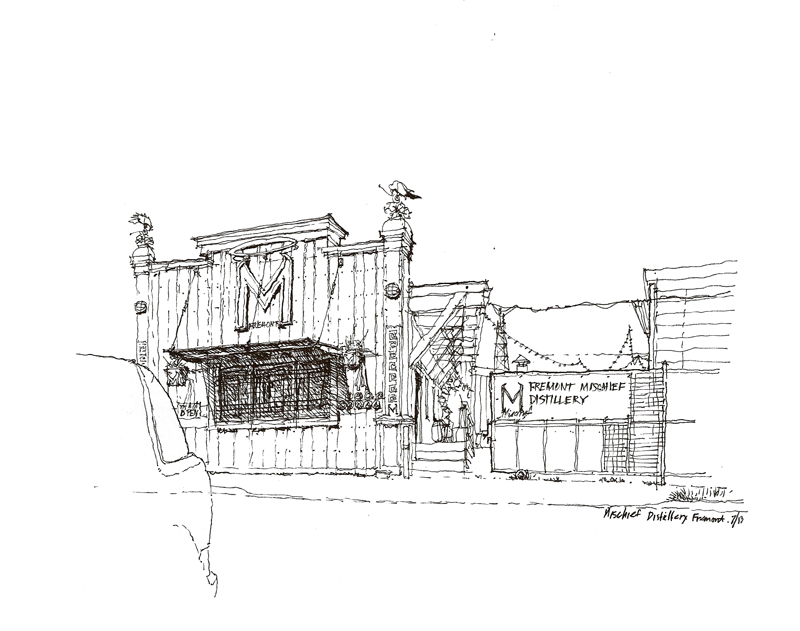 “Fremont Mischief is a full-circle distillery. We begin by selecting the finest organic, heirloom and small farm conventional grains & botanicals. Together with pure artesian waters, these ingredients are skillfully crafted into fine spirits with the help of our artisan stills. Then, our spent grain is reused and ultimately returns, full-circle, as organic compost for farms and gardens. We recognize the artistry in crafting fine spirits. Our stills are a work of art themselves. They are hand-made by Arnold Holstein Co., a German family that’s been building distilleries for many decades. We worked closely with the still-maker, to incorporate proprietary technology into our columns stills. No need for twelve times distilled or even three.  Our stills allow us to distill pure, flavorful spirits the very first run.”