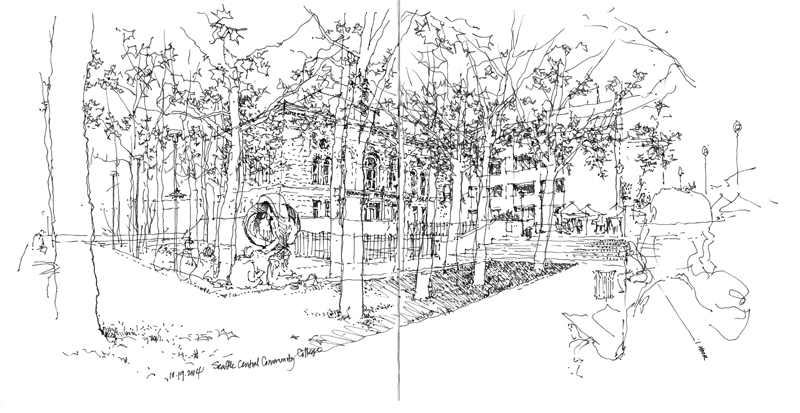 Yesterday at the monthly meeting of the Seattle Urban Sketchers group, I drew this view while sitting in the corner park at East Pine and Broadway in the Capitol Hill neighborhood of Seattle, looking toward the Broadway Performance Hall and Seattle Central Community College. This scene attracted me because of the way the trees in the park filtered the view of the buildings beyond. I began by first drawing the building forms and then worked from back to front, adding elements such as the fencing, the ground terracing, and the sculpture by Charles Smith. I then drew the tree trunks and foliage. Finally, I went back to fill in the details and texture that I could see through the trees.

I think that it’s okay in a sketch like this to draw over previously drawn elements and even be a little messy as long as the lines are lightly drawn. It’s when we add details and darken certain lines that we should pay attention to which elements overlap others. I believe the resulting transparency of the drawing helps convey the depth of the space.