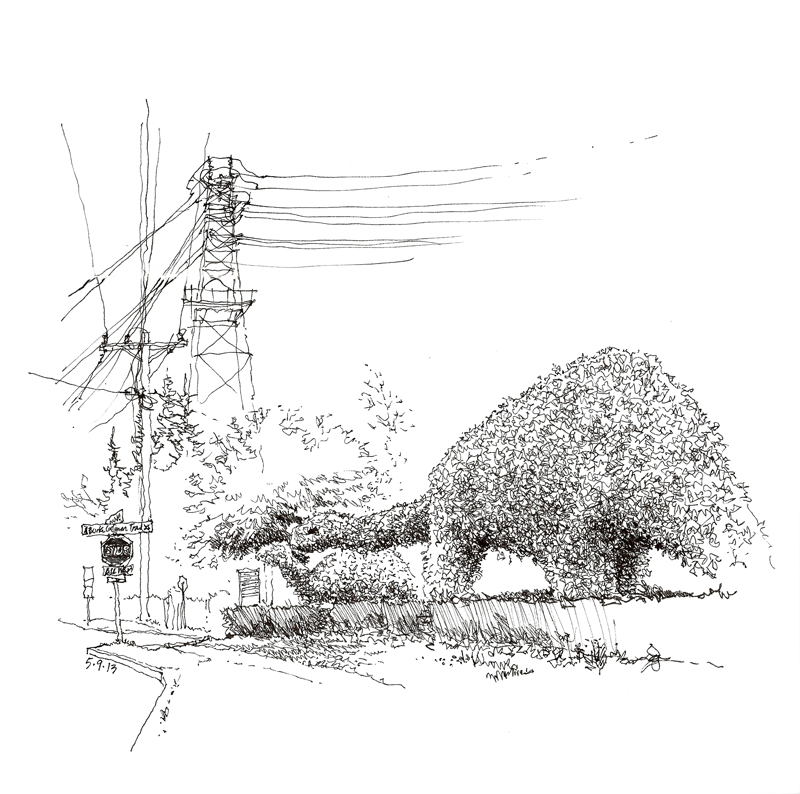 It took over 12 years but the ivy has finally completely covered these steel-framed dinosaurs. In 1998, a proposal to the city—initiated by Josh Logan and John Hegeman, authored by Theresa Callahan, and supported by the Fremont Arts Council and other community groups—enabled the ARF (Artists Republic of Fremont) to purchase the dinosaurs from the Pacific Science Center for a dollar. The catch was that the steel framework, weighing five tons and measuring 66 feet in length, had to be moved in two days; with the help of several Fremont businesses, the deadline was met. Now, the mother Apatosaurus and her baby rest peacefully alongside the Burke-Gilman Trail where Phinney Avenue North meets North 34th Street.

After quickly roughing out the framework for the drawing, it took a while to scribble in the leafy texture. When covering a large shape with hatching or texture, working methodically from one end of a shape to the other can often result in unintentional banding. So I like to move around and work in different areas first and then fill the voids in between. Once I had the overall texture evenly distributed, I then went back to intensify the foliage to darken the shaded areas and give form to the dinosaurs.

I find that drawing organic forms is a lot easier than delineating geometric ones since it is easier to get away with errors in proportion. And they’re more fun to sketch!