Have you ever tried deliberately to do a “bad” drawing?

A while ago, I heard an interview on the radio where a voice teacher was discussing one of her students who was having trouble with a certain range of notes. To address this issue, the teacher asked her student to first try to sing those notes badly, to make the worst sounds she could imagine! Which got me to thinking. How difficult would it be to do a deliberately “bad” drawing? And could this actually help us to draw “better”? 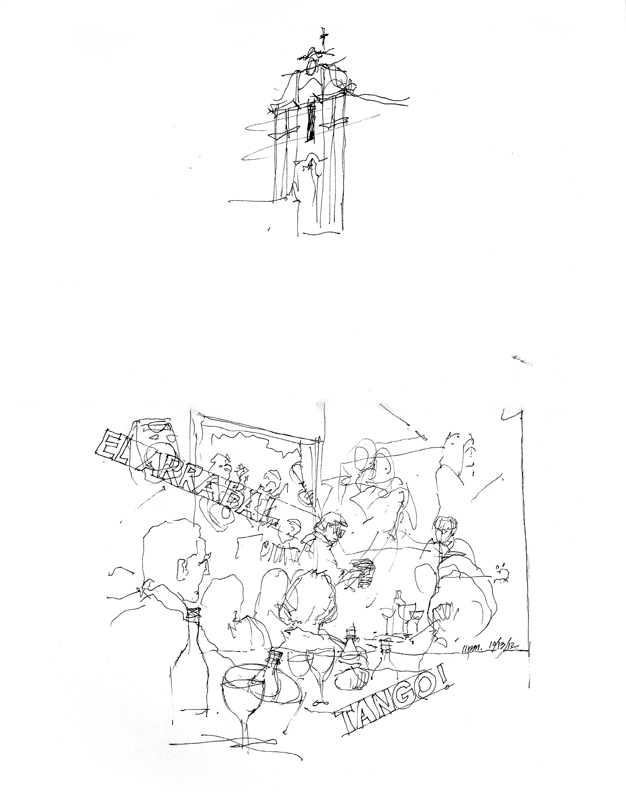 We are so used to striving to do our best that to do the opposite is almost unthinkable. It’s like drawing in the dark, as I did with this scene of a tango performance at El Arrabal in Córdoba. In times like this, one has to trust the eye and the hand, and the mind that controls both. 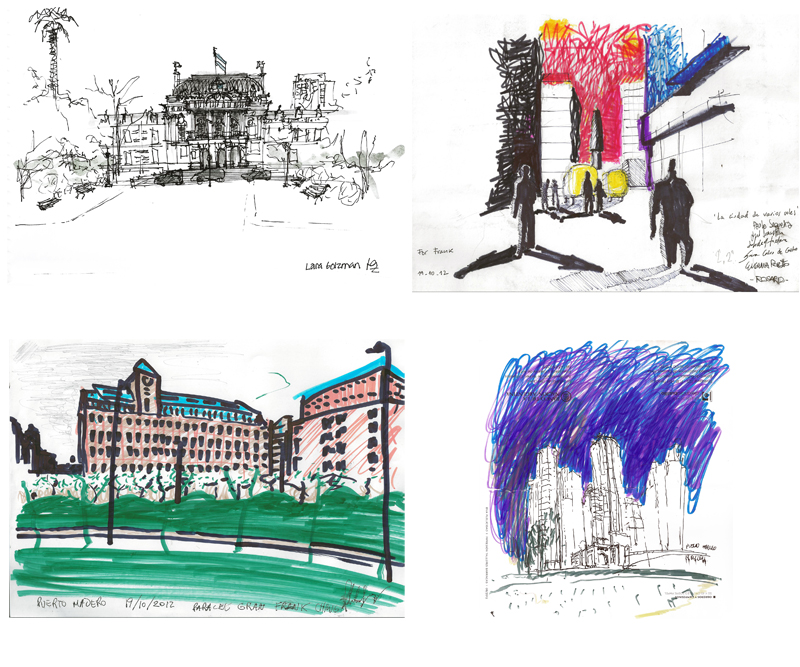 And good fortune…With special thanks to those who were generous and thoughtful enough to present me with their drawings during our recent visit to Argentina. 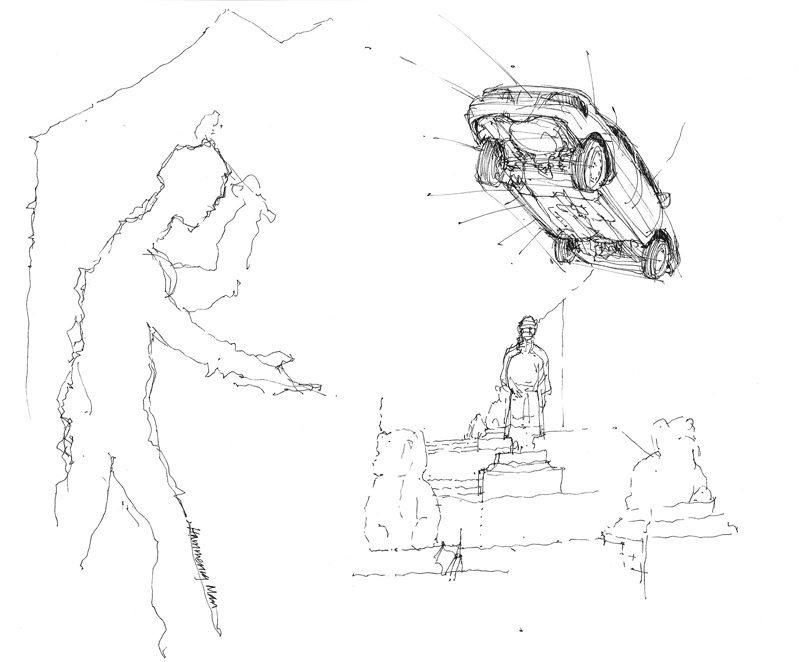 Returning from early spring in the southern hemisphere to impending winter here in Seattle, I joined the Seattle UrbanSketchers group yesterday for a sketching session at the Seattle Art Museum. What you see above, in the lower right portion of the page, is actually my second attempt at drawing the lobby of SAM, designed by Robert Venturi and Denise Scott Brown in 1991. Below is my first attempt, which I had abandoned because I was having trouble with the proportions of the statuary and the scale of the space as it moved up the stairway between First and Second Avenues. Soon after beginning the second drawing, however, I decided to return to my first attempt and continue to develop it further. You can see a lot of the initial marks as I struggled with positioning and sizing elements but in the end, I think these tentative, exploratory strokes add character to the finished drawing. 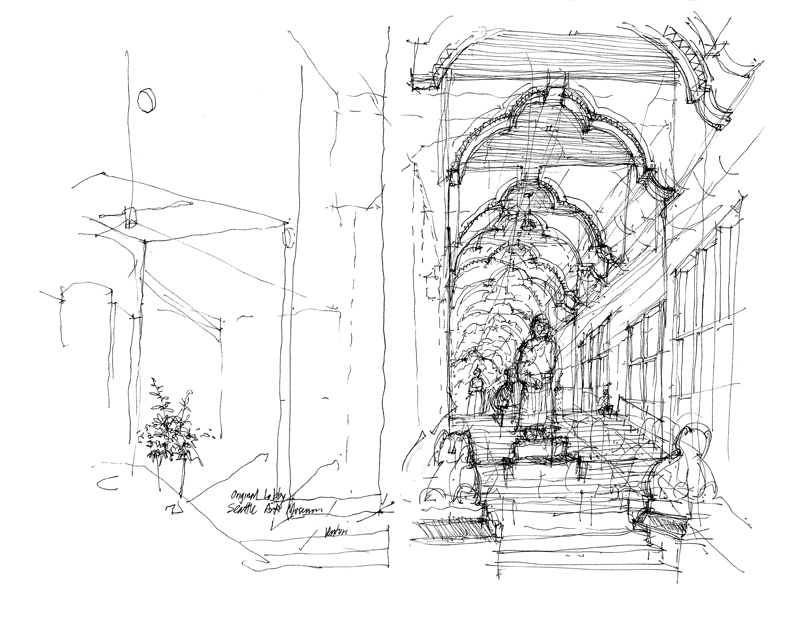 This is something I remember telling my students but sometimes forget to follow myself—it is usually a fool’s errand to keep starting over when one has difficulties with a drawing. Better to stick with the task at hand and see where the process leads. 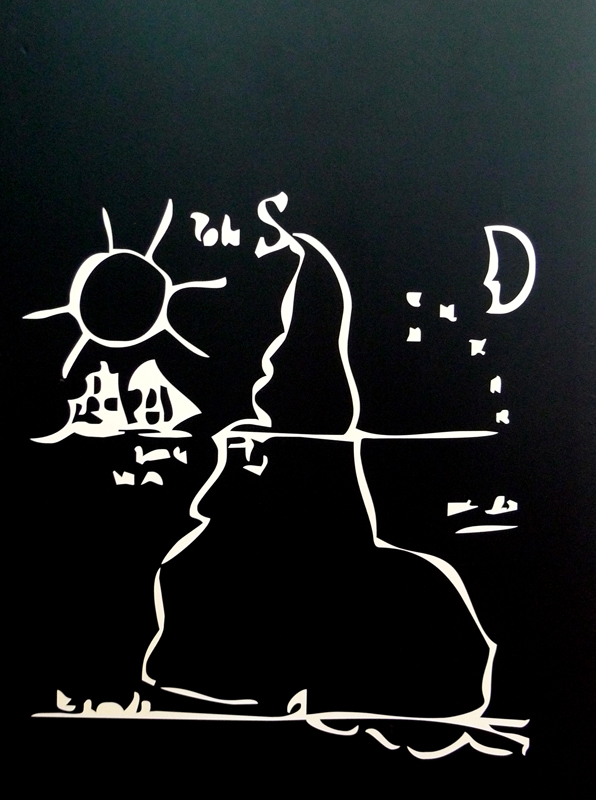 We happened on this graphic of South America during our recent visit to Universidad Nacional de Córdoba in Argentina. It figuratively turned our heads upside down. We had been so accustomed to maps of the world having north oriented up and south down. This graphic shows that there are other ways of seeing our world.

This idea of (dis)orientation manifested itself in another way on our first day in Córdoba, as we walked around the historic center with map in hand. I am usually pretty good at reading maps and orienting myself in new environments but something was amiss. It took a while but I finally realized this was because I had assumed that the sun was in the southern sky. But here in Córdoba, the sun was actually illuminating the northern sides of buildings and so what I had thought was south was actually north on the street map. And even knowing this, it remained difficult to overcome a lifetime of assumptions.

In each city we visited in Argentina I was asked to do a drawing demonstration. Public demonstrations always make me a little nervous but the warm reception to these made it worthwhile. The first demonstration was at Alta Gracia, where I explained my approach to selecting a viewpoint, composing the view, and beginning the drawing. 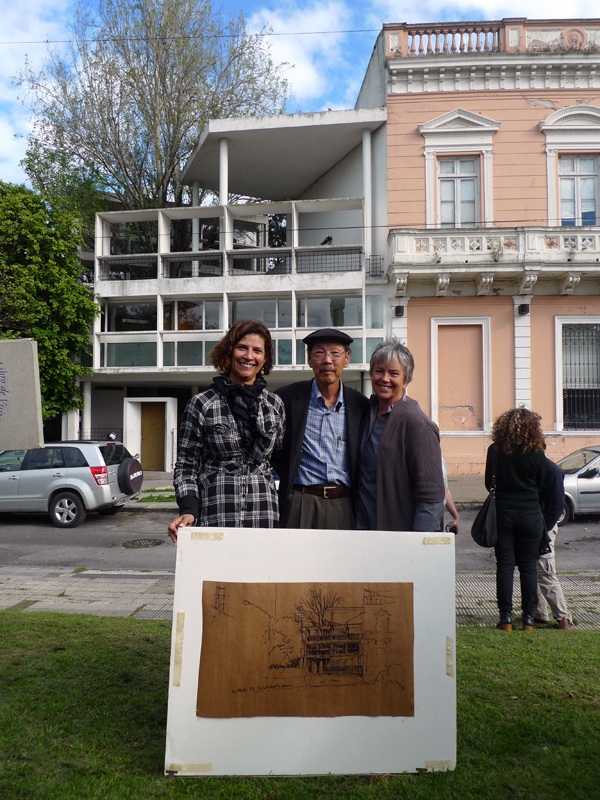 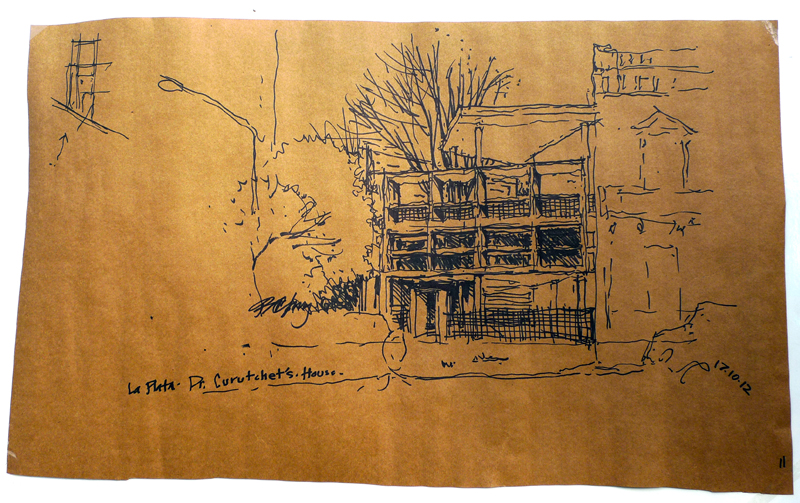 Le Corbusier’s Casa Curutchet in La Plata is an truly amazing work of architecture. Here is the demo I did of the exterior after we had toured and sketched the rich, light-filled interior spaces. It was exhilirating to see how well Le Corbusier was able to translate his Five Points of Architecture to a new continent and culture. 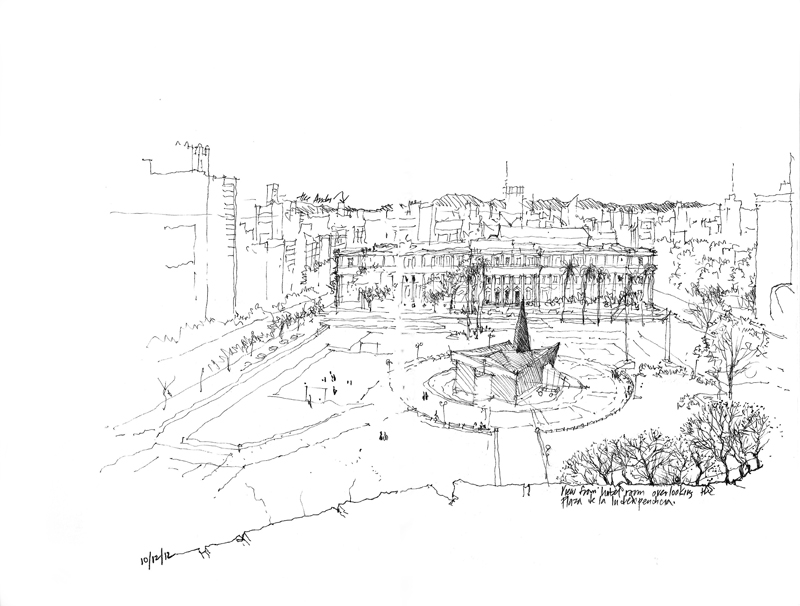 I didn’t have a lot of free time to sketch on my own in Argentina, but here are two views of Córdoba from our first day there. The first is of the Plaza de la Independencia as seen from our hotel room. 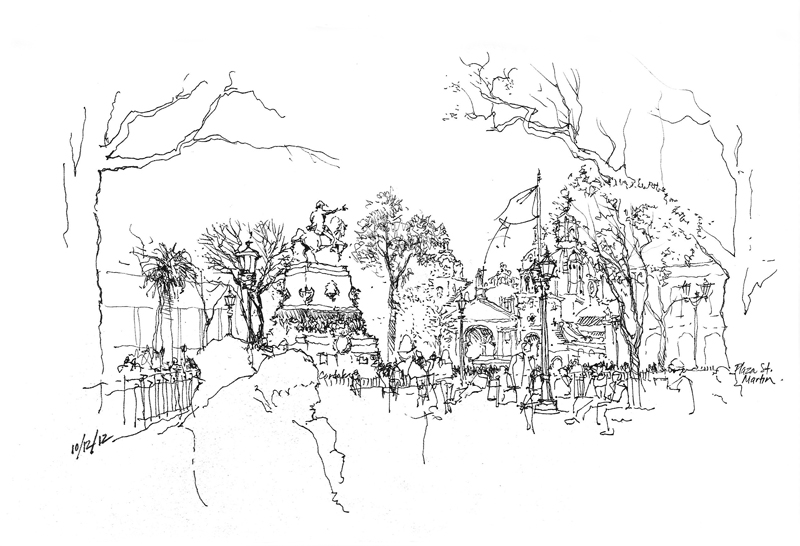 The second drawing is of the Plaza San Martin, center of the historic district and featuring a statue of José de San Martín, the Argentine general who lead the successful struggle for independence. In the background, you can see the 16th century Cathedral.