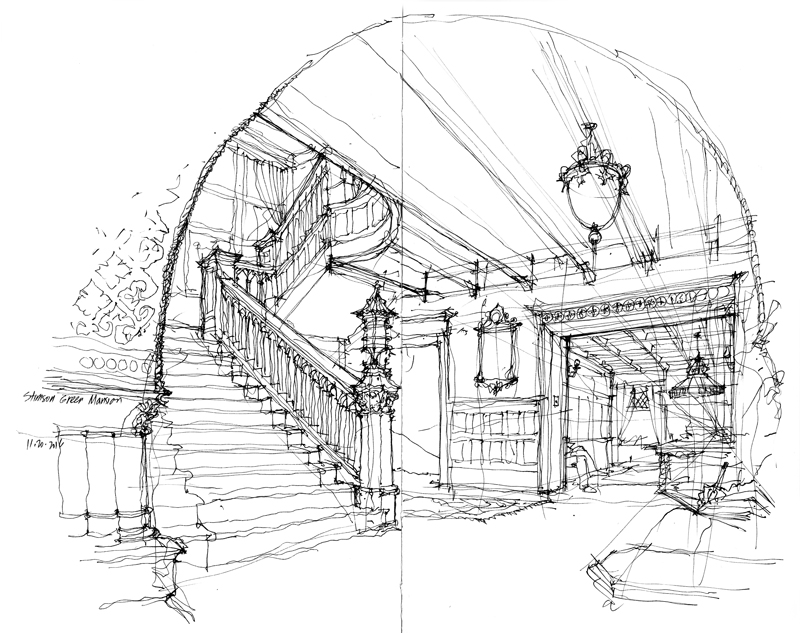 Back in February of 2012, the Seattle Urban Sketchers group met at the Stimson-Green Mansion for its monthly sketching session. Designed by Spokane architect Kirtland Cutter and completed in 1901 for Seattle industrialist C. D. Stimson and his wife Harriet Stimson, the mansion was subsequently purchased by Joshua Green in 1915—hence the name Stimson-Green. When Green died in 1975, the Historic Seattle Preservation and Development Authority purchased the property. After working on its restoration, Historic Seattle sold the property in December 1977 to Priscilla Collins, granddaughter of C. D. and Harriet Stimson, with an easement protecting the main house, carriage house, and grounds from demolition, alteration, or remodeling. In 2001 Collins donated the mansion to the Washington Trust for Historic Preservation, which provides continued stewardship.

This past Sunday, the Seattle Urban Sketchers were able to return to the Stimson-Green Mansion, thanks to Julianne of the Washington Trust for Historic Preservation. After walking through the various rooms on all three floors, I decided to redraw the same view I had done four years ago—looking out from under a Romanesque style arch at the central hall. The space ascends the main stairway to the upper two floors and extends back to a warm, sunny dining room on axis with the front entry foyer. 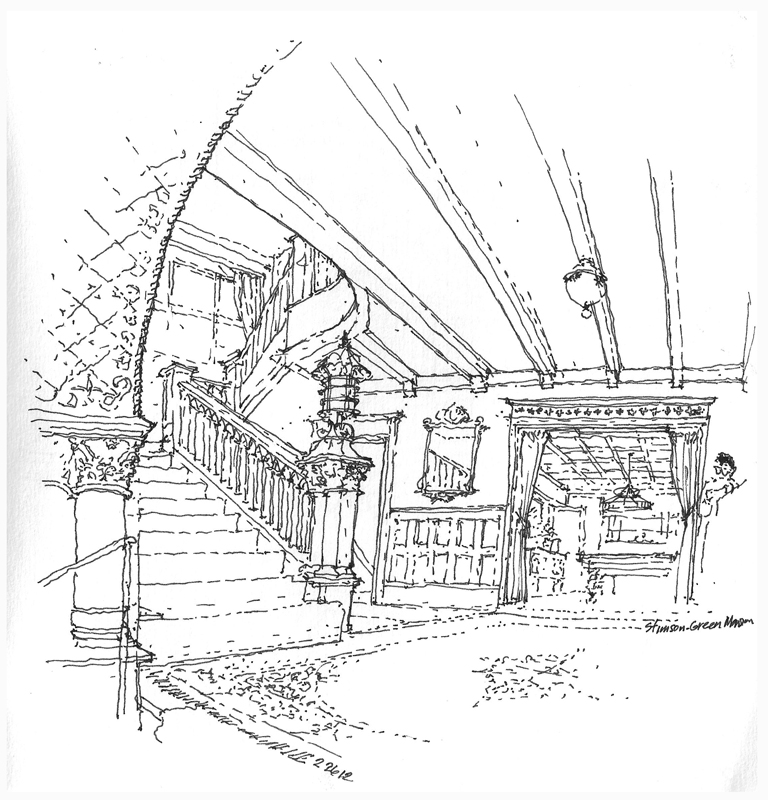 In comparing the two drawings, one can see how the absorbency of the paper surface matters a lot when drawing with a fountain pen. In the earlier drawing, directly above, the ink lines tended to bleed and so I was discouraged from drawing too finely. In the second drawing, shown first, the paper coating allowed for finer lines and suggestions of details. 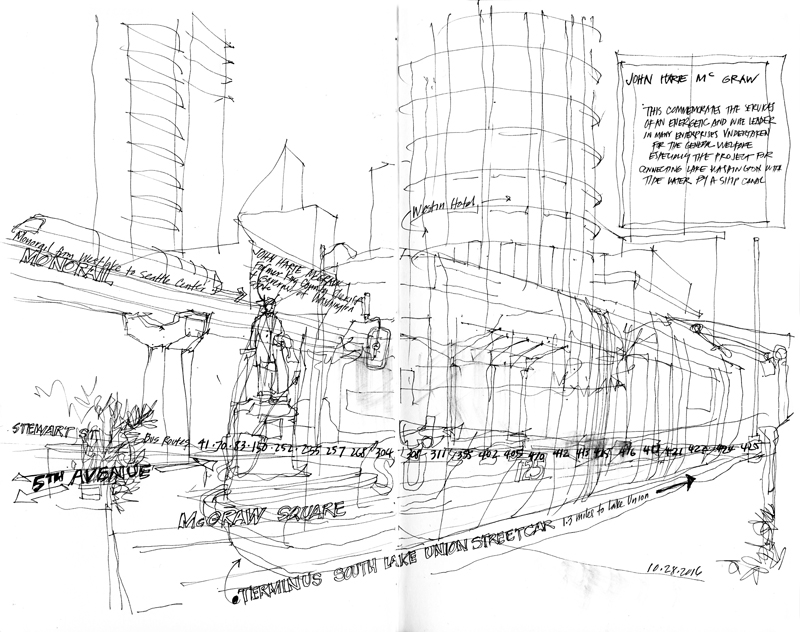 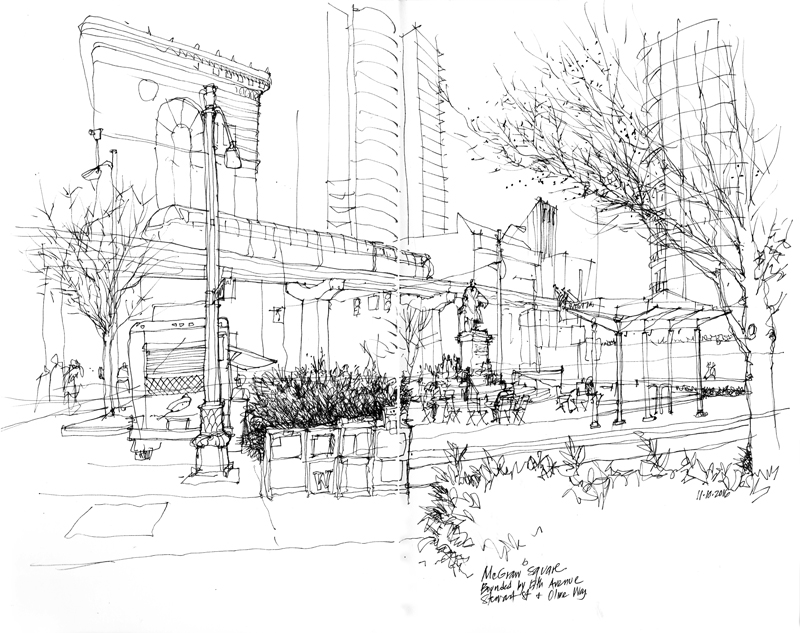 I returned to McGraw Square last week but instead of finishing my original sketch, I decided to annotate it and to redraw the square from a different perspective. I simply moved back about eight feet from my original position and in doing so, dramatically altered both the field of view and the drawing composition. This illustrates how the decision about where to position oneself is an important one when drawing on location and should not be taken lightly.

I took the bus downtown a couple of weeks ago to do this drawing of McGraw Square, where 5th Avenue meets Stewart Street and Olive Way. My intention was to document an intersection where various modes of transportation converged—the elevated Monorail that was built for the 1962 World’s Fair and still travels a mile from Westlake Center to Seattle Center; the South Lake Union Streetcar line that runs 1.3 miles from this terminus to the south end of Lake Union; and the multiple buses routes that run east-west along Stewart Street. In addition, of course, there are all of the cars and pedestrians making their way through the downtown corridor.

But sometimes, things don’t work out as planned. Even though it was a fairly pleasant day, I just didn’t have the proper state of mind to finish the drawing. That’s okay. I intend to go back and finish it the next time clear weather is in the forecast. 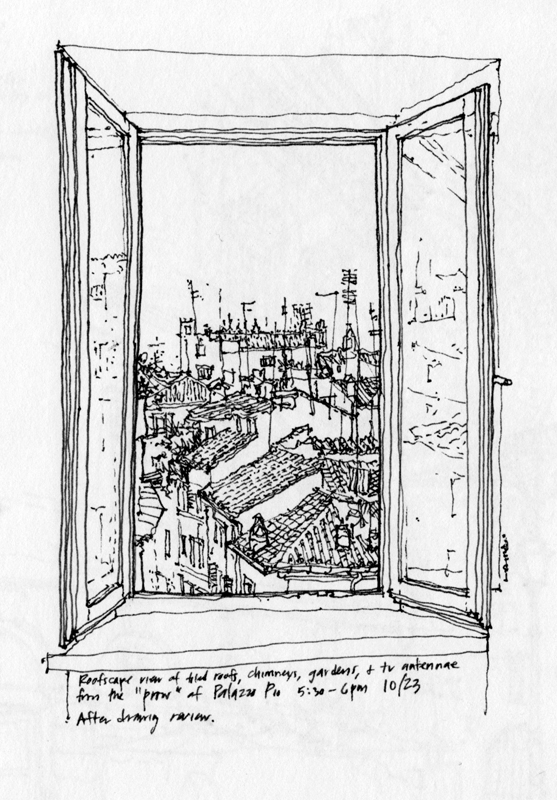 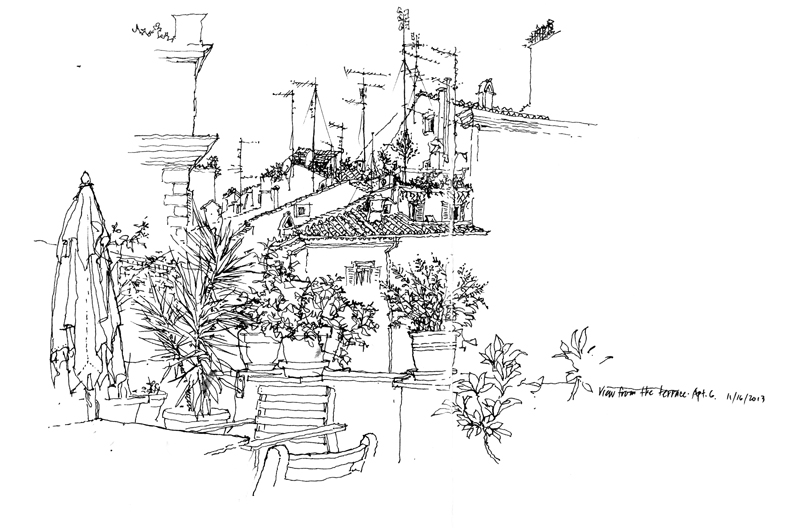 After a month of record rainfall and predictions of more rain to come, it’s becoming increasingly difficult to find areas sheltered enough from the weather to draw comfortably outdoors. So here I want to remind myself of the wonderful times I was privileged to spend in Rome where the fall weather was always sunny and warm.

These two views are from the Palazzo Pio in Rome, which overlooks the Campo dei Fiori. If we bothered to look up rather than at the many historic structures and monuments one runs into in the Centro Historico, we would see that the rooftops are often filled with terraces, potted plants, tiny apartments, and, of course, the forest of TV antennas that are gradually giving way to satellite dishes.