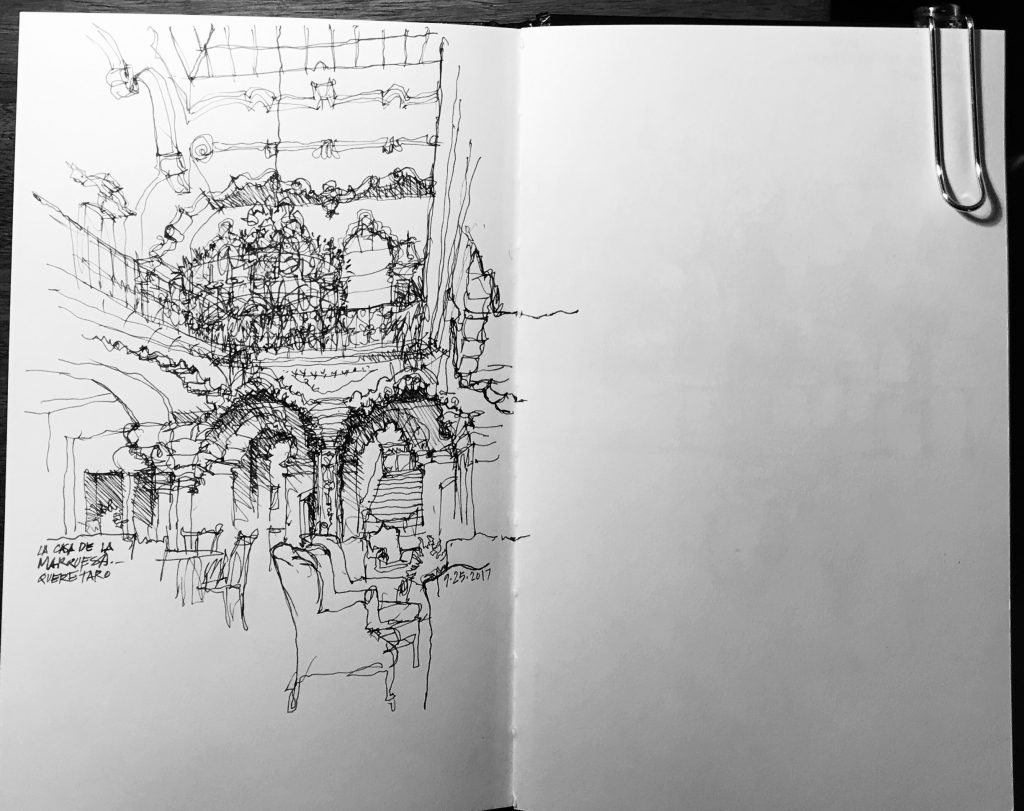 I’ve spent a week in Santiago de Querétaro, a UNESCO World Heritage Site, exploring the historic center and drawing with a wonderful group of students from the School of Architecture, Art and Design at Tecnologico de Monterrey. At the end of the first day’s activities, as I was walking back to my hotel, this casa was pointed out to me. It was built in 1756 for the Marquesa de Villar and is now a boutique hotel. Seeing the richness of the entry court, I felt compelled to draw to stop and draw it. More drawings to come. 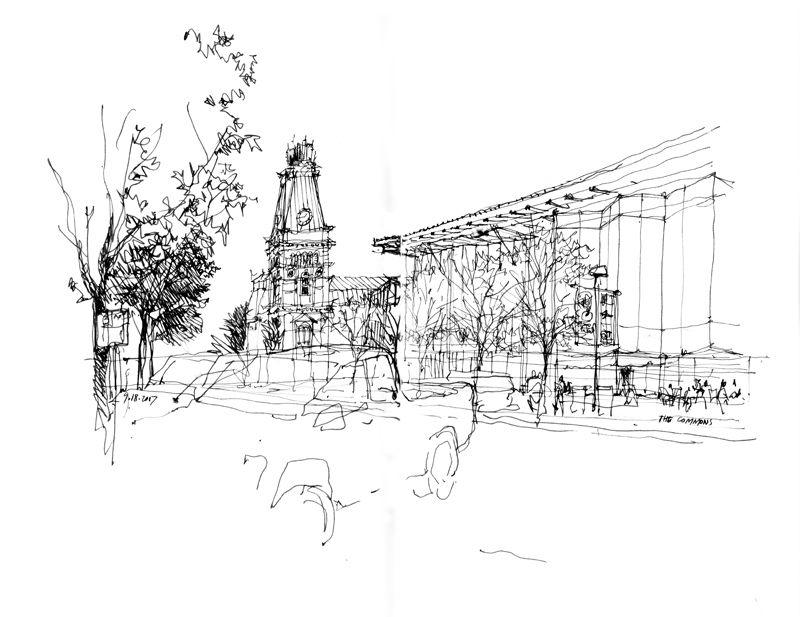 Earlier this week, I spent three days in Indianapolis to participate in a video project for my publisher Wiley. On the first day, we drove down to Columbus, Indiana, for some on-location sketching. Here are a couple of quick sketches that I did as studies before I attempted the larger format drawings that were to be filmed. 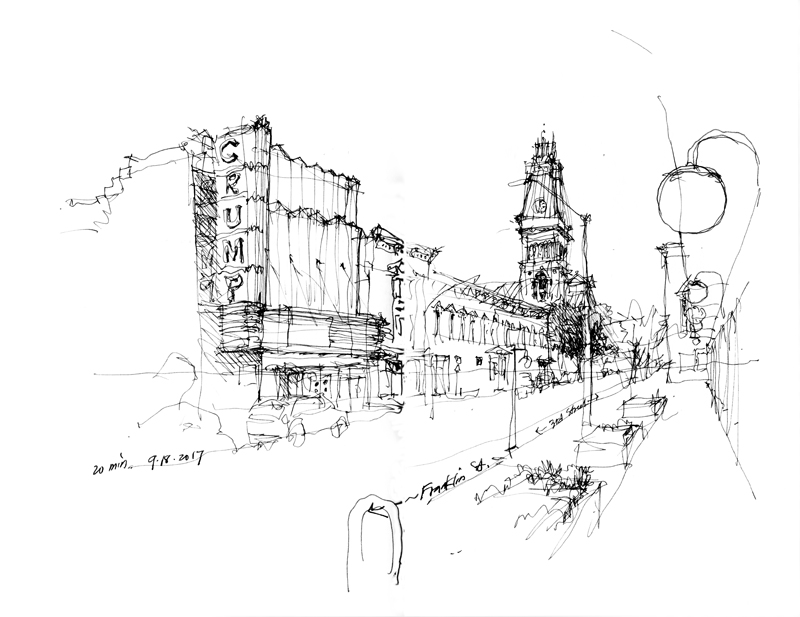 Columbus is known for its collection of Modernist projects that are interspersed among the town’s older 19th-century buildings. This unusual architectural heritage owes its existence to J. Irwin Miller who, as president and chairman of Cummins Engine Company, created the Cummins Foundation in the mid-1950s to subsidize projects by Eero Saarinen, I.M. Pei, S.O.M., Cesar Pelli, Richard Meier, and Robert Venturi, among others.

Thanks to Lauren, LIsa, Paul, and Eric for their expert assistance in making this project possible, and to the Ball State University students who participated in the studio sessions. 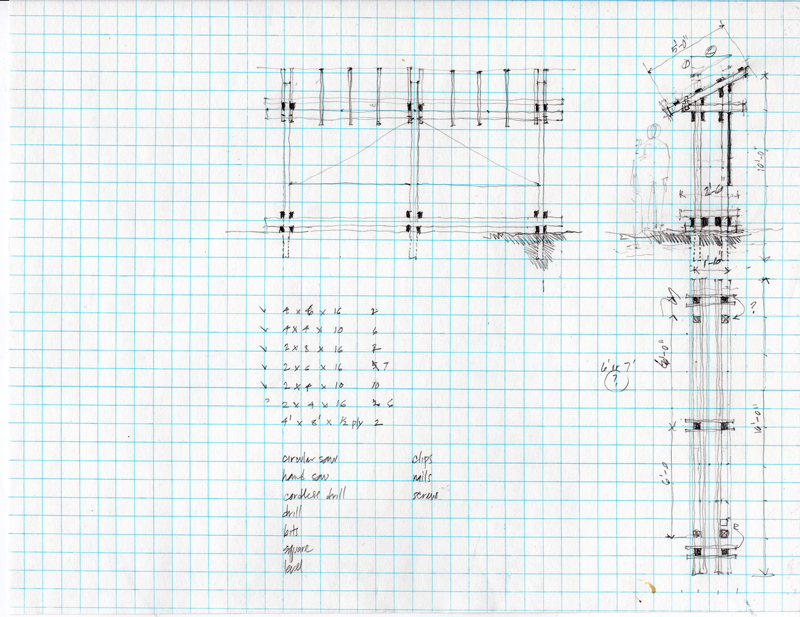 I had been mulling the building of a wood storage shelter for a while. At first, I would occasionally visualize the basic structure in my head and imagine how it could be assembled and what types of connections were needed. Thinking in this way, I could picture the structure both as a whole as well as up close to look at details and revise it over time.

As the time to actually build approached, it was time to put the ideas down on paper to verify my preliminary thoughts. Thinking on a sheet of grid paper with a simple pencil, I resorted to a convention that is now somewhat outmoded but still useful to work out spatial relationships in three dimensions—multiview drawings. I moved back and forth between related plan, section, and elevation views to resolve and lay out the sizes, lengths, and spacings of the wood members.

The intent of these simple sketches was not to produce a finished set of working drawings but rather to figure out the basic set of relationships that could guide construction and also to produce a basic bill of materials. 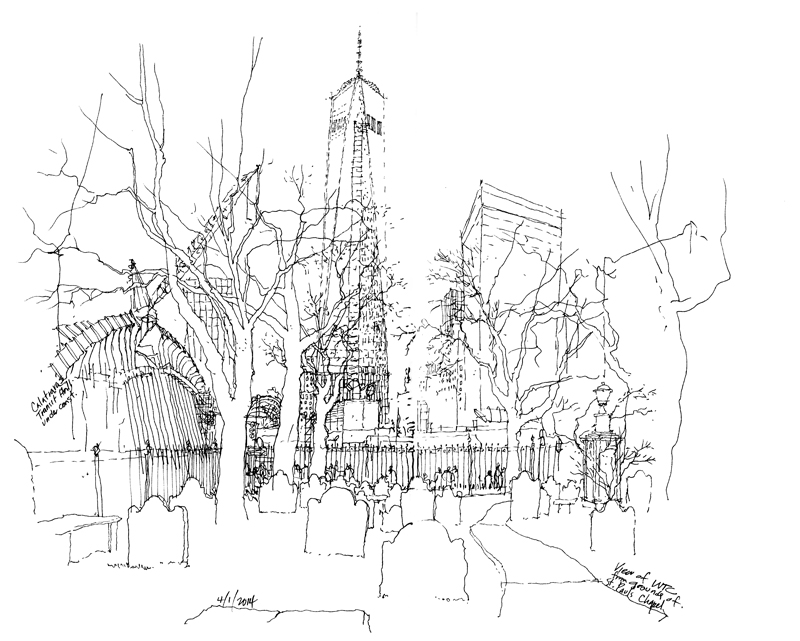 A view of the World Trade Center, drawn from the grounds of St. Paul’s Chapel, in remembrance of the thousands of victims of the attacks on the U.S. that occurred on this fateful day 16 years ago. 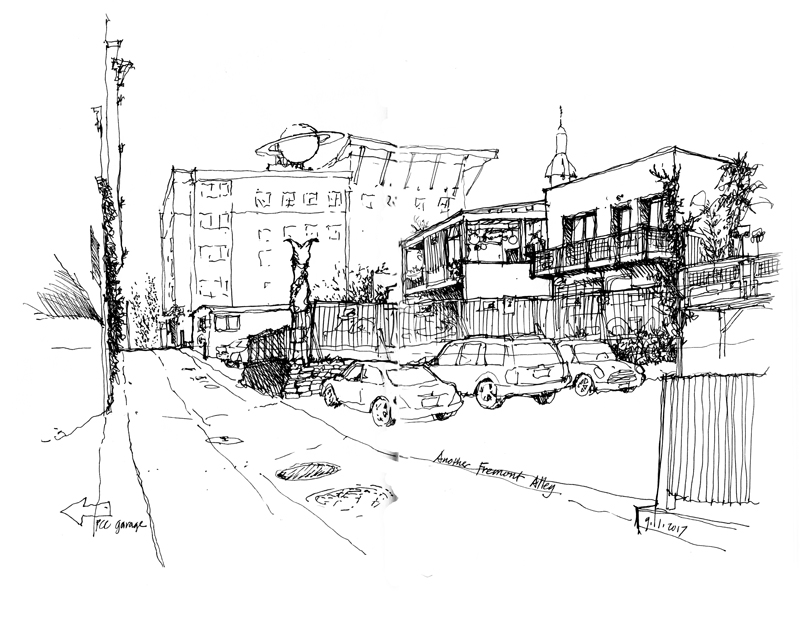 Another view of a Fremont neighborhood alley, this one between North 34th and North 35th Streets, looking west toward Evanston Avenue North with Saturn and the Rocket in the background. 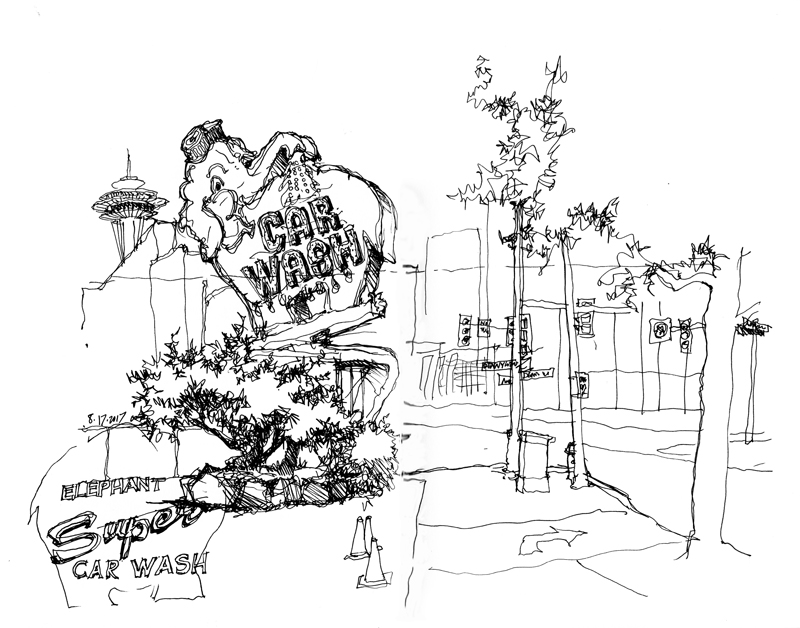 Established in 1951, the Elephant Car Wash was the first automated car-washing facility in the state of Washington. In 1956, it moved to its current location on Battery Street, marked by the famous, neon-lit pink elephant. This easily recognizable landmark is situated at the busy intersection where Denny Way intersects with Aurora Avenue North and 7th Avenue.

Other than the busyness of the view, full of traffic signs and signals, the main difficulty was in drawing the large sign as it slowly rotated about its base. To do this, I first visualized and drew the large oval in the position shown, and then added details with each rotation of the sign.