Heading down to Orange County, California, for a workshop this weekend. 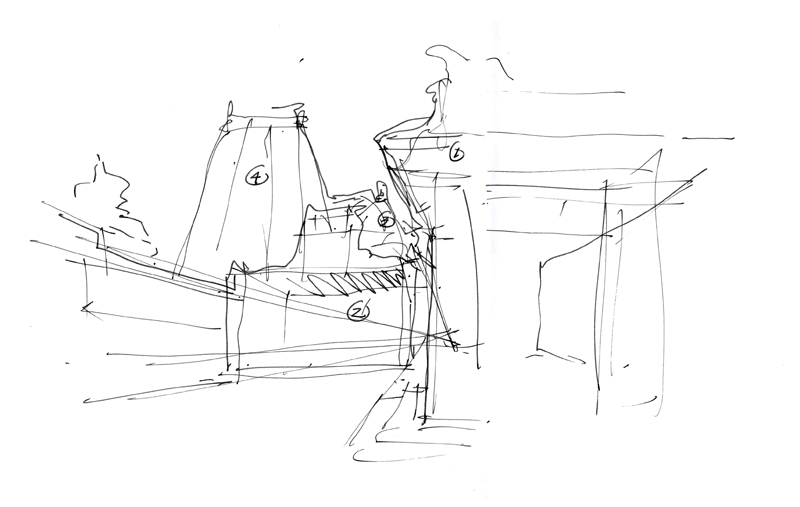 During my workshops, when working one-on-one with a participant, I often do a demonstration of a concept in my sketchbook, such as this one describing the layers of depth that I saw at Kapaleeshwarar Temple in Mylapore, India. 1 is the foreground porch structure; 2 is the porch structure in the middle ground; 3 is the top of a structure just beyond 2; and finally, 4 is the gopuram in the distance. 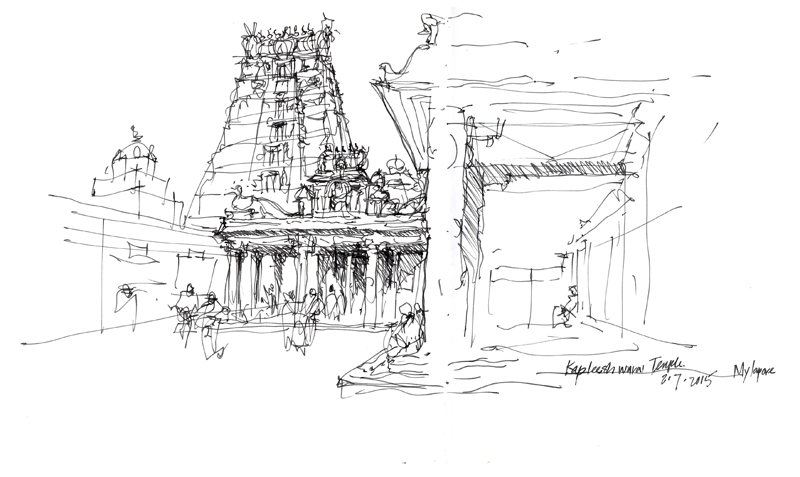 This second image is a follow-up sketch demonstrating how to convey the layers of depth described in the first diagram. Describing layers of depth on a two-dimensional page relies on a discernible contrast of detail or tonal values between each layer and the next. In this case, it was a matter of suggesting detail and tonal values in selected portions of the drawing and omitting them in others. 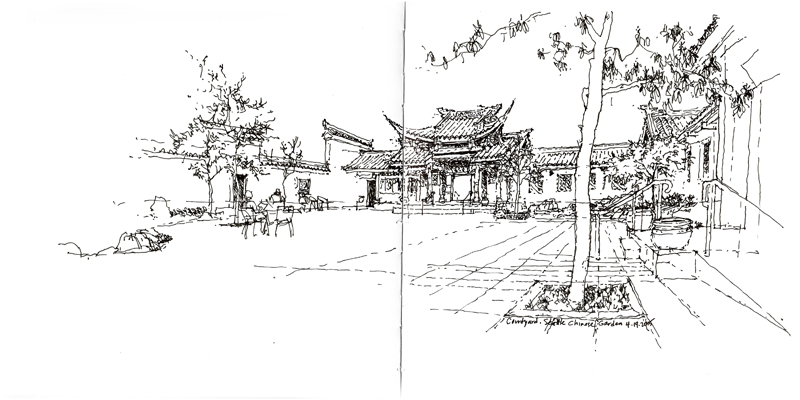 For its regular monthly outing, the Seattle Urban Sketchers met this past Sunday at the Seattle Chinese Garden. Above is a view from within the Knowing the Spring Courtyard, completed in 2010 by artisans of the Chang Shu Ancient Style Garden Design Construction Company, from Seattle’s sister city of Chongqing.

Below is an exterior view as one approaches the courtyard from the south. The lead designer for the Sichuan-style garden, Feng Dacheng, is from the Chongqing Bureau of Parks and Greenery. Future plans call for a dense, complex mixture of plants, stone, water, and architecture, including an education center and a banquet hall with seating for 200. 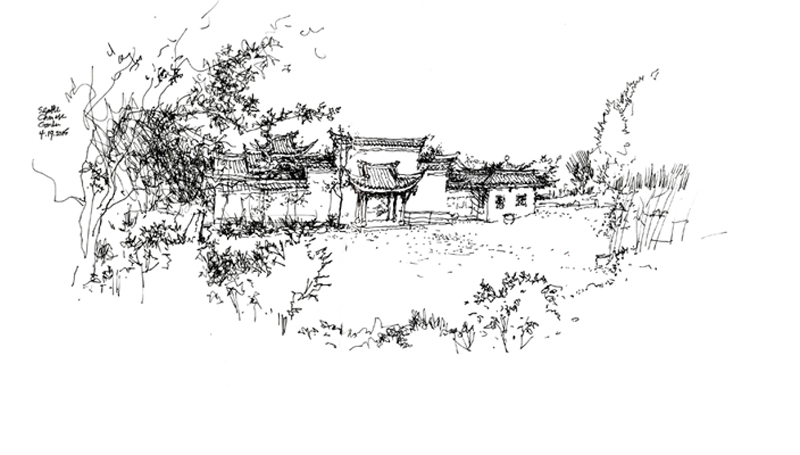 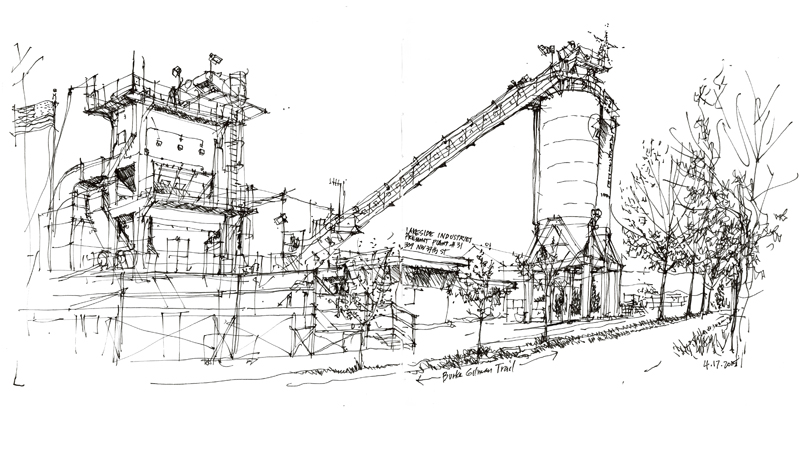 Industrial architecture, through the arrangement of geometric forms, often expresses its utility, function, and process in the most direct and honest way. This example is the Fremont Plant of Lakeside Industries, a third-generation family-owned company dating from 1952. Sandwiched between the Ship Canal and the Burke-Gilman Trail, the plant processes the movement of sand and gravel between trucks and barges 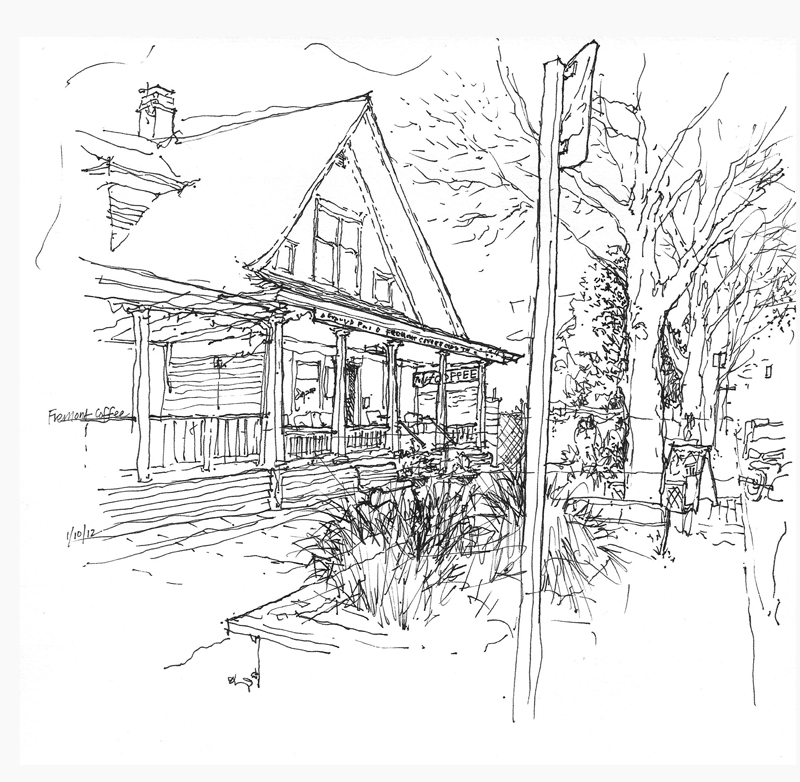 I took advantage of an ad hoc meeting of the Seattle Urban Sketchers at Fremont Coffee to sketch my favorite coffee shop, where I get my daily Americano. Above is an exterior view that I had done a couple of years ago. So today, I sketched two additional views, one of the interior and the other of the outside deck. I had a little trouble conveying the scale of the two spaces. Scale—in particular, human scale—is a difficult aspect to capture well but it is so important in describing the intimacy or expansiveness of a space. 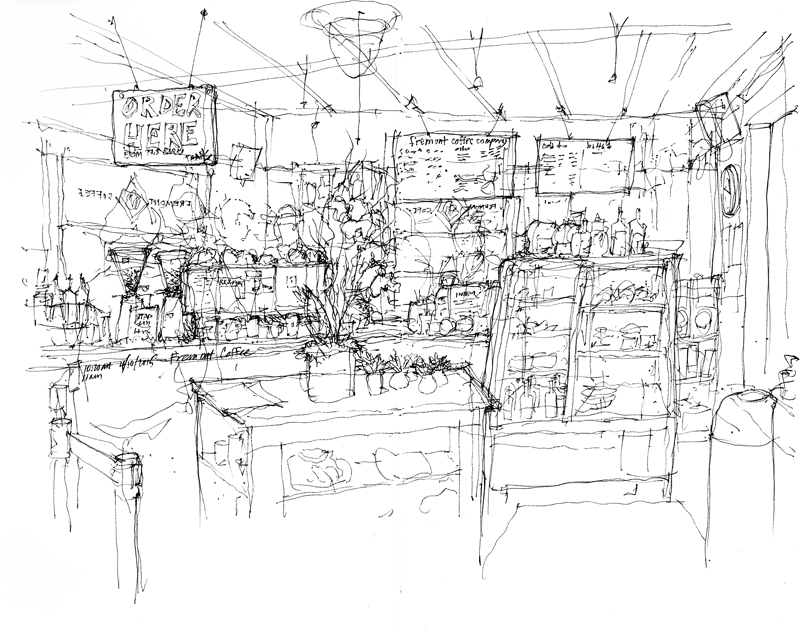 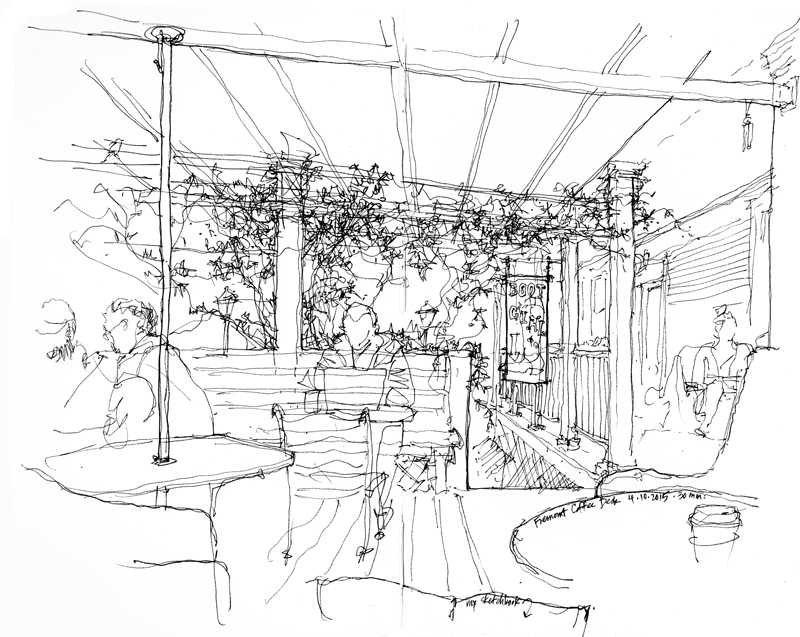 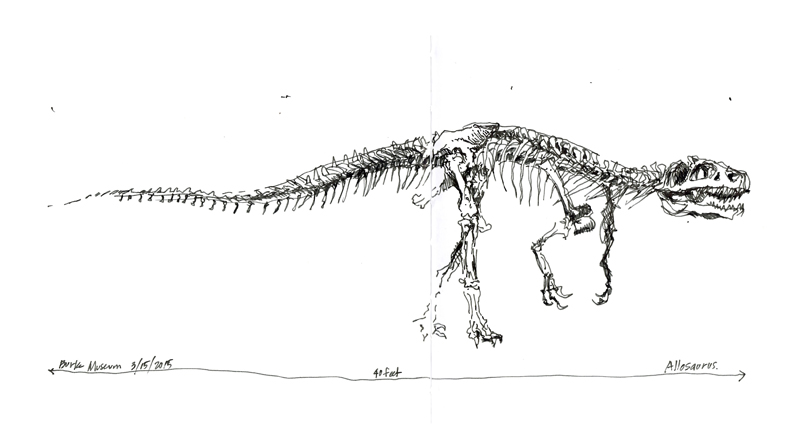 On display at the Burke Museum of Natural History and Culture on the UW campus is this Allosaurus Fragilis, a fleet-footed predator from the late Jurassic period.

The second image below shows how I attempted to keep the allosaurus in proper proportion. I first estimated that the height of the hind legs was about a third of the dinosaur’s overall length. You can barely see the tic marks that I used to divide the length into thirds. I then used this measurement to fix the height of the hind legs. I also judged the position of the hind legs to be a little more than a third of the length from the head. Finally, I drew the curvature of the spine to guide the development of the dinosaur’s skeleton. 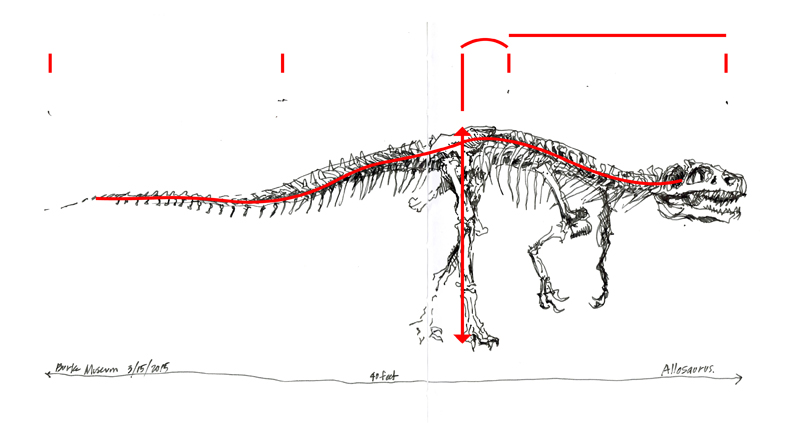 Being able to see and replicate proper proportions, no matter the nature of our subject matter, is an important skill in drawing.