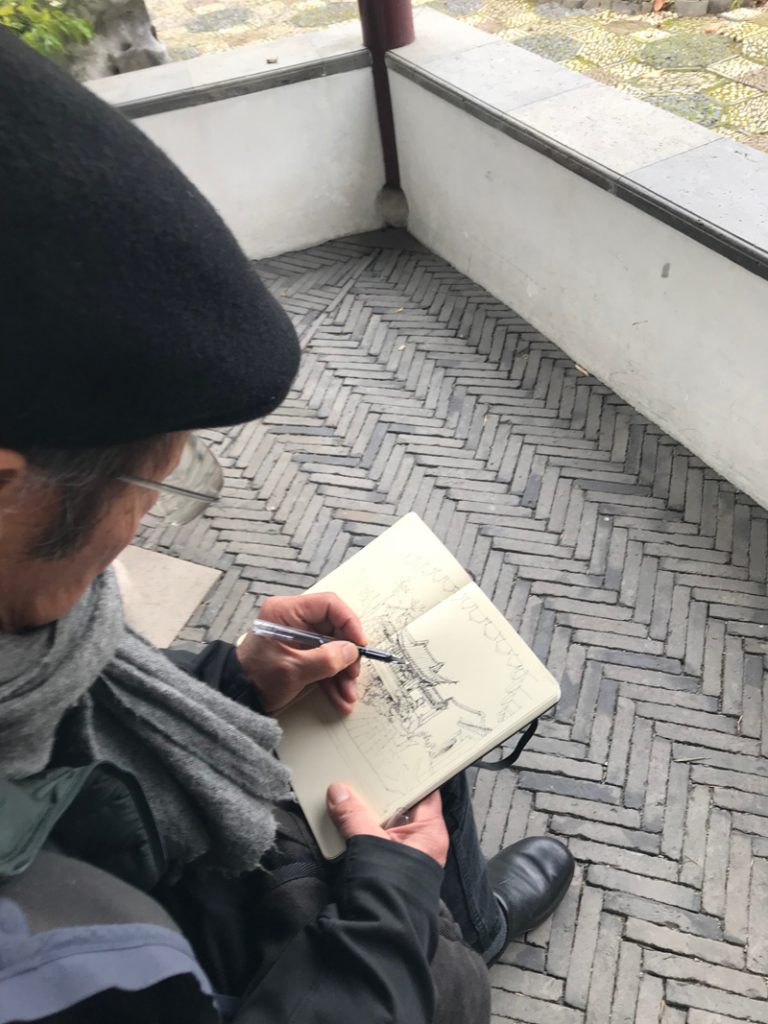 Visiting Vancouver BC for a few days gave me the opportunity to visit the Dr. Sun Yat Sen Classical Chinese Garden. Designed by Wang Zu-Xin with the help of the Landscape Architecture Company of Suzhou China, and constructed in 1985, it is said to be the first Scholar’s Garden built outside of China. 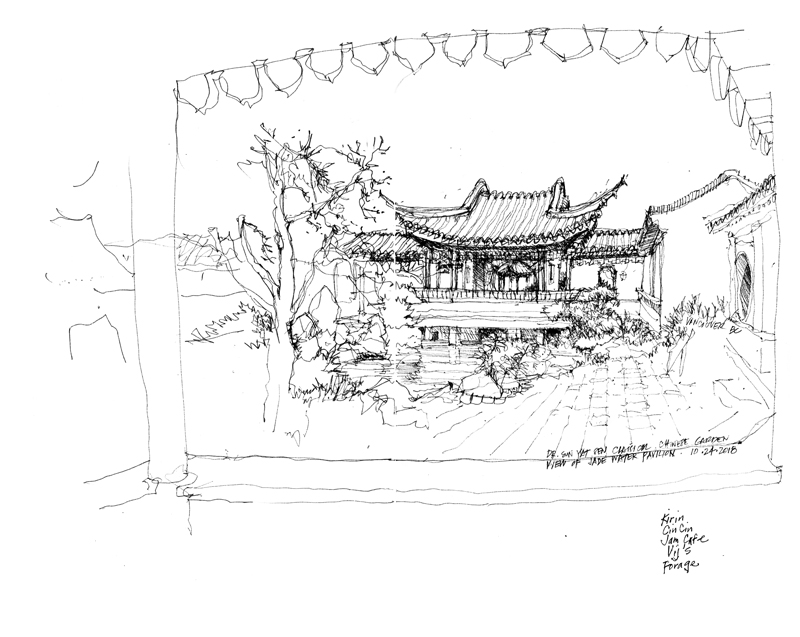 This is a sketch of the Jade Water Pavilion. The term jade water refers to the deliberate cloudiness of the pond water, which is supposed to intensify its reflections. 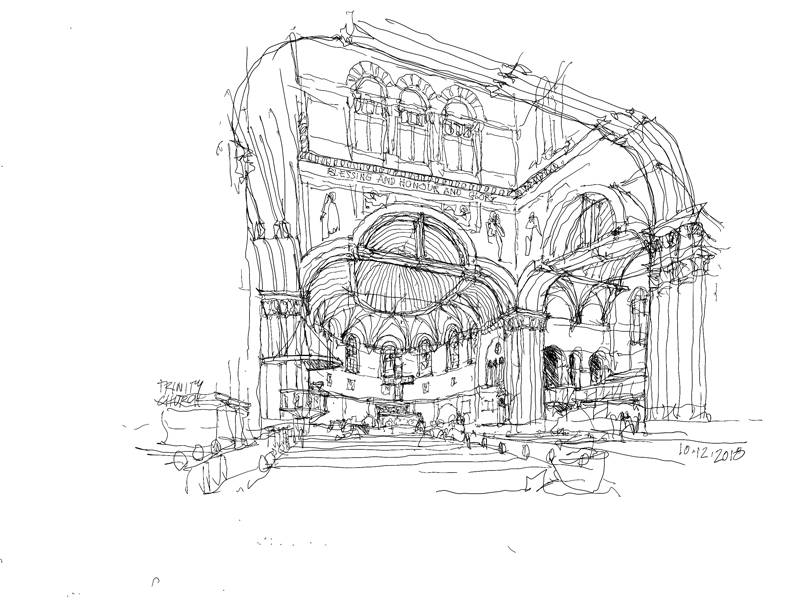 Here is a view of the interior of Trinity Church in Boston, showing how the sanctuary occupies one arm of the Greek-cross plan while the congregation occupies the airy crossing and the other three arms. Here is a video clip of the drawing process. 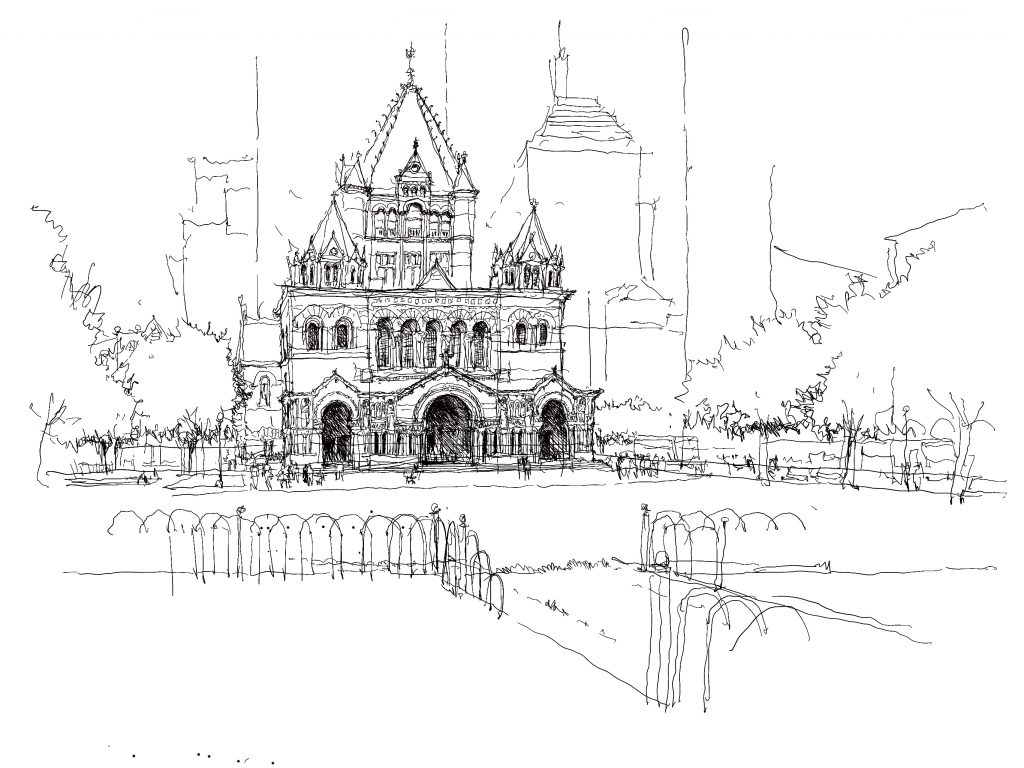 Being in Boston for a drawing workshop—sponsored by Suffolk University and hosted by Sandro Carella—gave me the opportunity to take another look at Trinity Church. A National Historic Landmark, the H. H. Richardson design is recognized as a masterpiece of American architecture. Although the parish was founded in 1733, it was more than 150 years before the current church was built on land-filled marshes in Boston’s Back Bay neighborhood.

Richardson replaced his initial idea of a Gothic Revival church with a Greek-cross auditorium plan that expresses the emerging, inclusive nature of American congregational practice, as inspired by the preaching of Phillips Brooks, Trinity’s Rector at the time of the building’s design and construction.

Despite its landmark status, Trinity Church is not a museum but rather it remains a place of worship and service where Christians and visitors gather on a daily basis.

Here is a video clip of the drawing process. 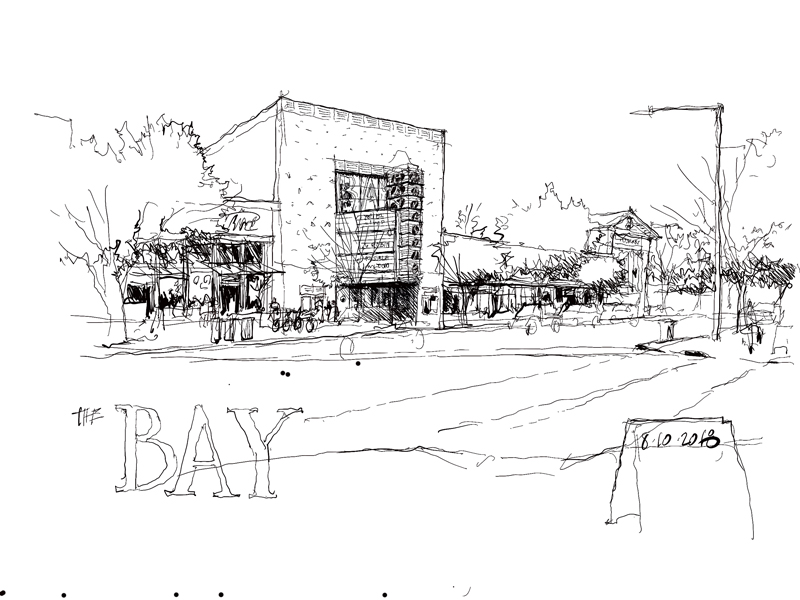 Back home in Seattle. Elltaes (Seattle spelled backward) Theatres LLC purchased the shuttered Bay Cinema property in 1998. While the original intention was simply to remodel the old wooden structure dating from the early 1900s, chairman Kenny Alhadeff wanted a more modern theater and so Weinstein A+U designed this new building, which was completed in 2002. The theater comprises a main auditorium on the ground floor and two smaller theaters on the third floor.

The most striking feature of the Bay is its marquee, below which sits the classic box office. The neon BAY letters from the old marquee were refurbished and is visible in the glass facade behind the marquee.

Here is a video clip of the process. 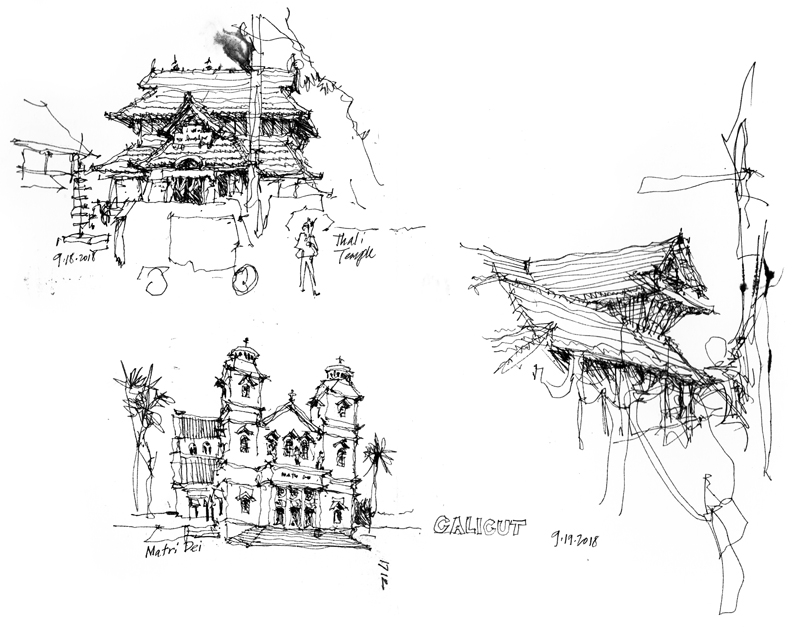 Following Mysore, my travels took me to the Design Ashram Community Organization in Calicut, where I taught a drawing workshop sponsored by World Architecture Travel. It was indeed a pleasure to walk the streets of Calicut and to sketch with a group of area architects and student interns.

To end my trip to India, I gave a presentation at the Zonal NASA Convention that the College of Architecture of Eranad Knowledge City hosted and spent two days drawing with students at Nilambur Kovilakam, the royal palace of the rajas who ruled the local area once known as Eranad 200 years ago. 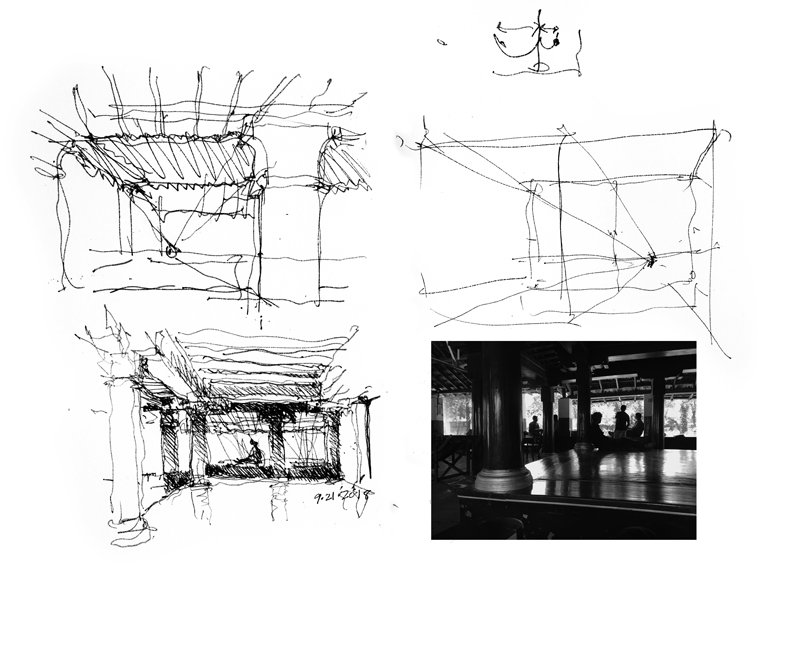 Thanks to all who made my trip to India a memorable one.