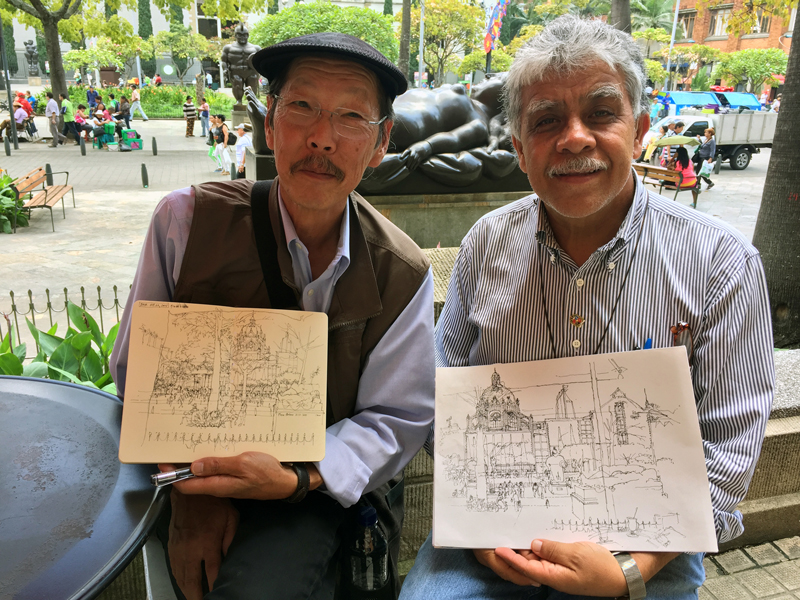 The day after the workshop with students at Botero Square, I met Fernando Saldaña Cordova from Sonora, Mexico, so that we could draw our own personal views of the public space in the old quarter of Medellin. 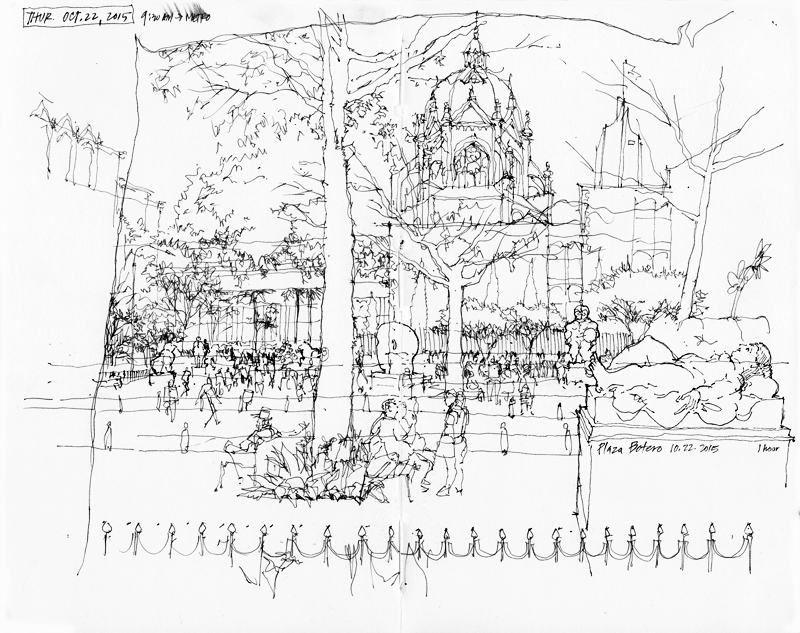 An hour and a short walk later, we came upon the Plaza Alpujarra, the administrative center of the city featuring a large, sweeping sculpture Monumento a La Raza (Monument to Race) by Rodrigo Arenas Betancur. Upon entering the public space, we decided we had to stop and do another drawing before lunch. 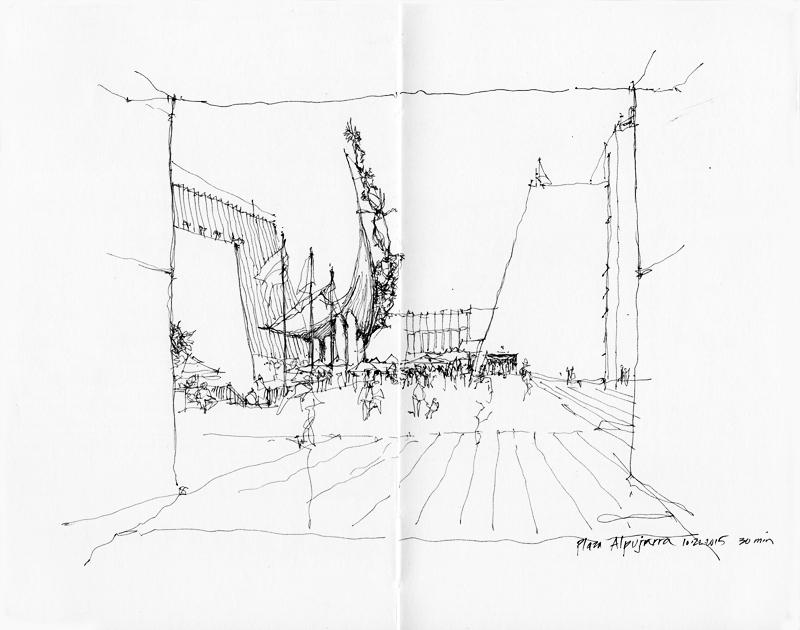 In my next post, I will show more scenes from Medellin, the City of Eternal Spring. 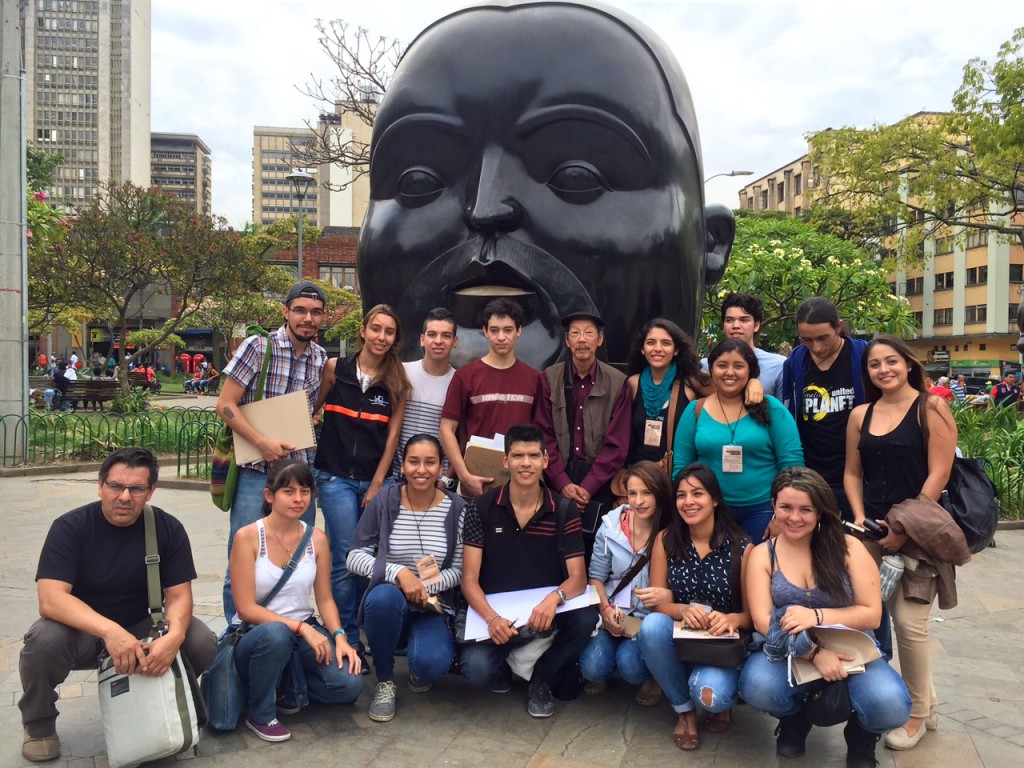 As part of the conference this week at the Medellin campus of the National University of Colombia, I was able to offer a couple of workshops for the students, something I always enjoy doing. Last Wednesday morning, we met at Botero Square in downtown Medellin, a hub of activity and urban life named after Fernando Botero, whose large, voluminous works are scattered throughout the park. 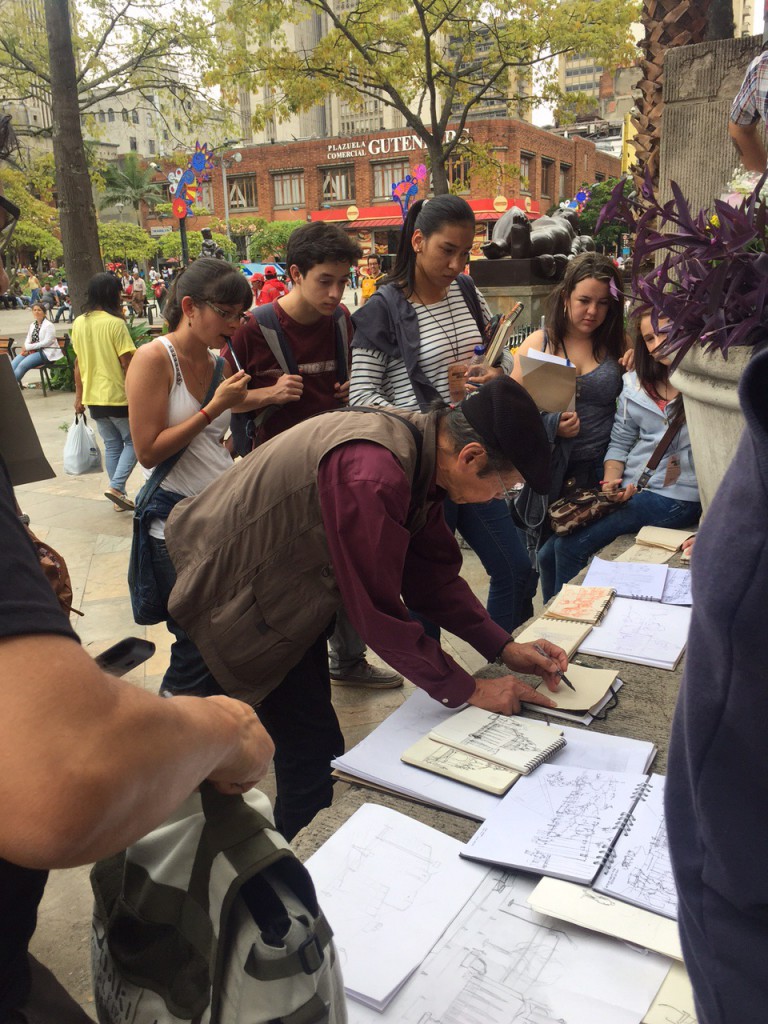 Here are examples of the sketches that I use to demonstrate capturing the essential structure of a scene. 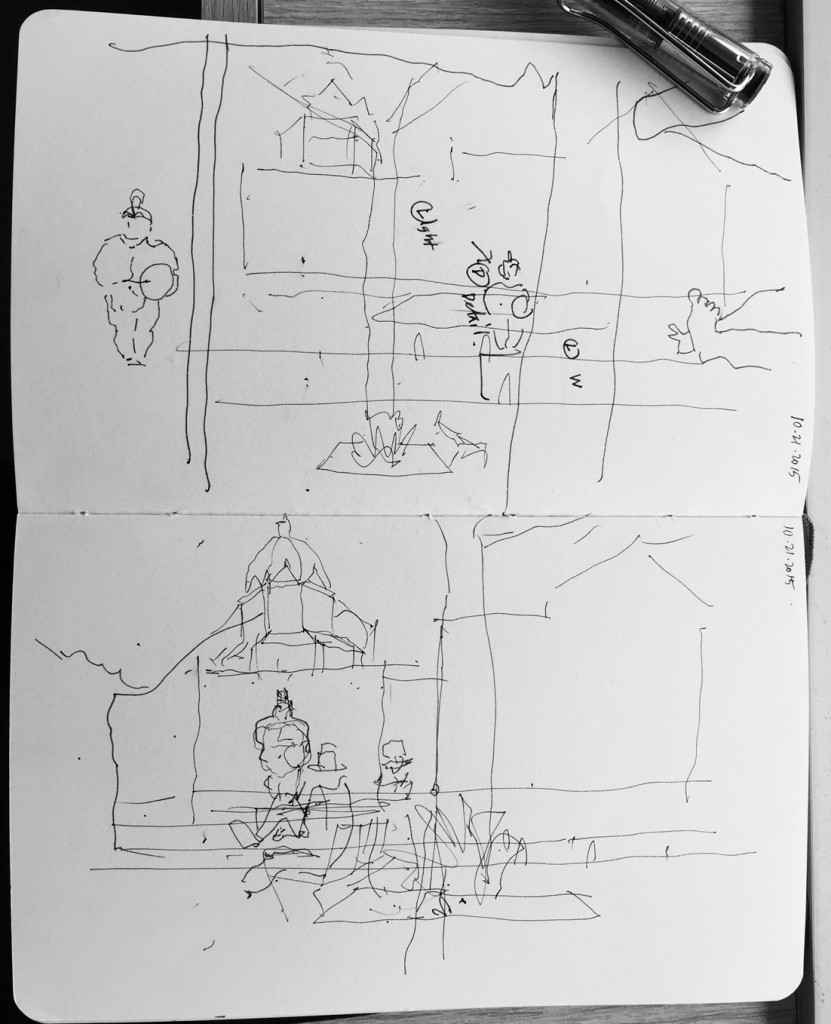 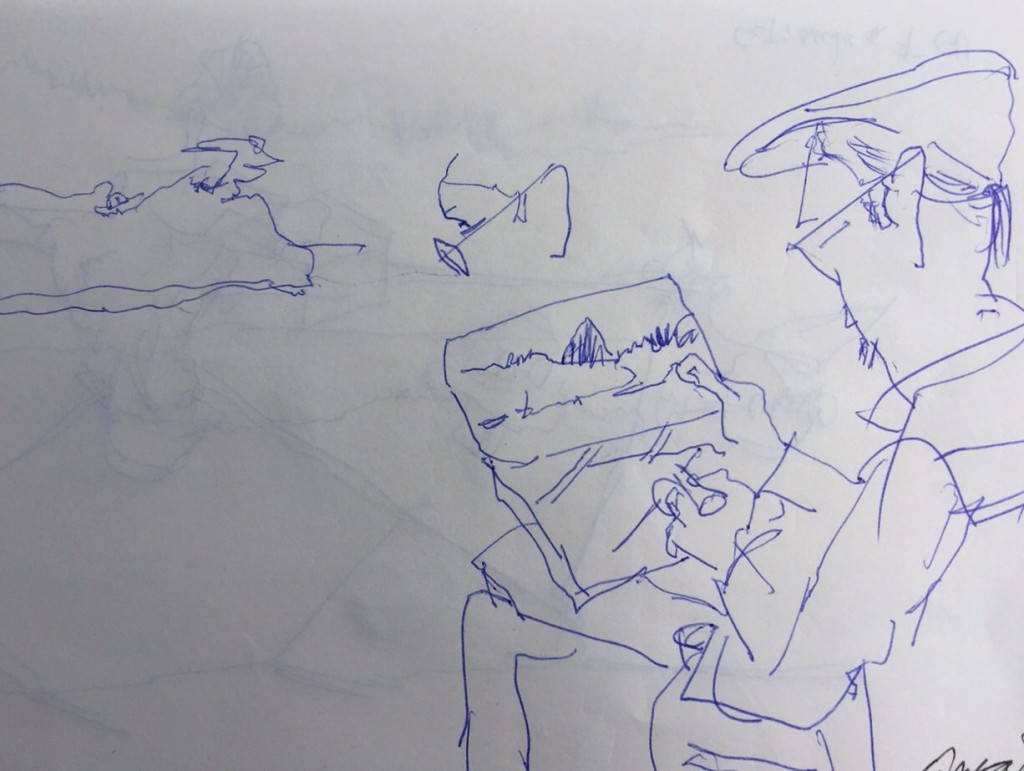 After two days of paper presentations and seminars at the Medellin campus of the Universidad Nacional de Colombia, a small group of faculty and students took a van ride to the Big Rock (El Peñol de Guatapé), about two hours northeast of Medellin. Along the way, we stopped in Guatapé, where Roberto Guerrero Pérez of Concepción, Chile, did this sketch of me drawing the view from a boat which was taking us on a tour of Represa Guatapé. 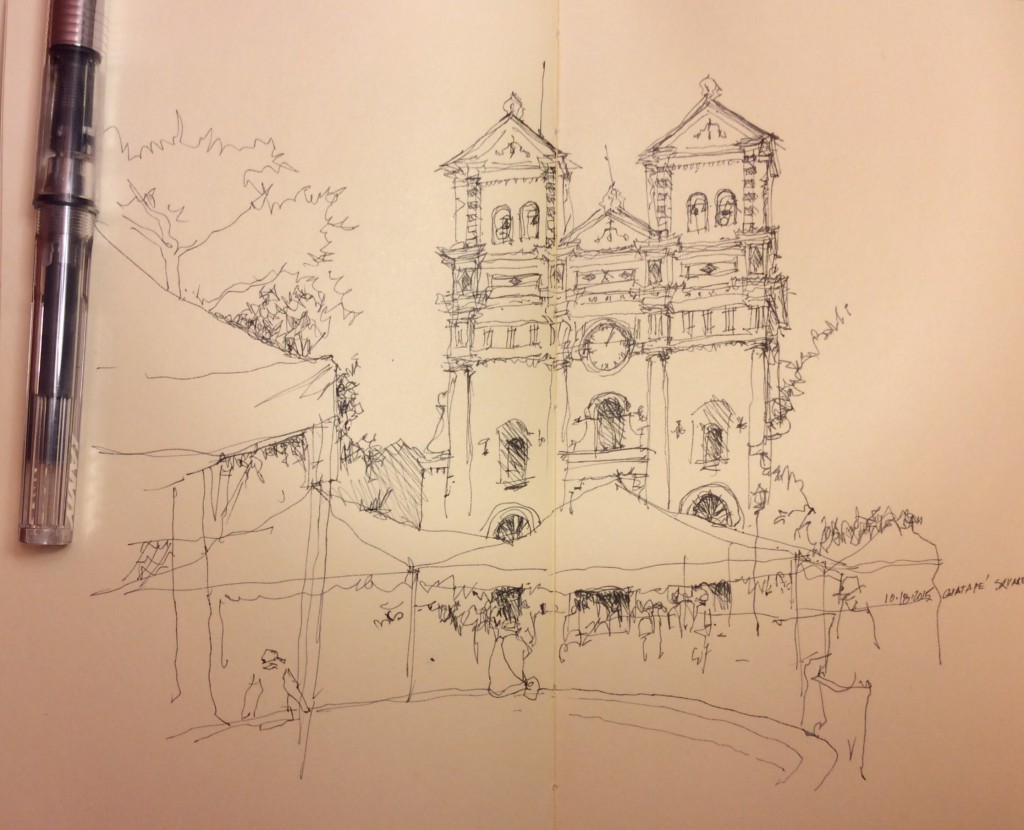 Later, I took a half hour to draw this view of the town square 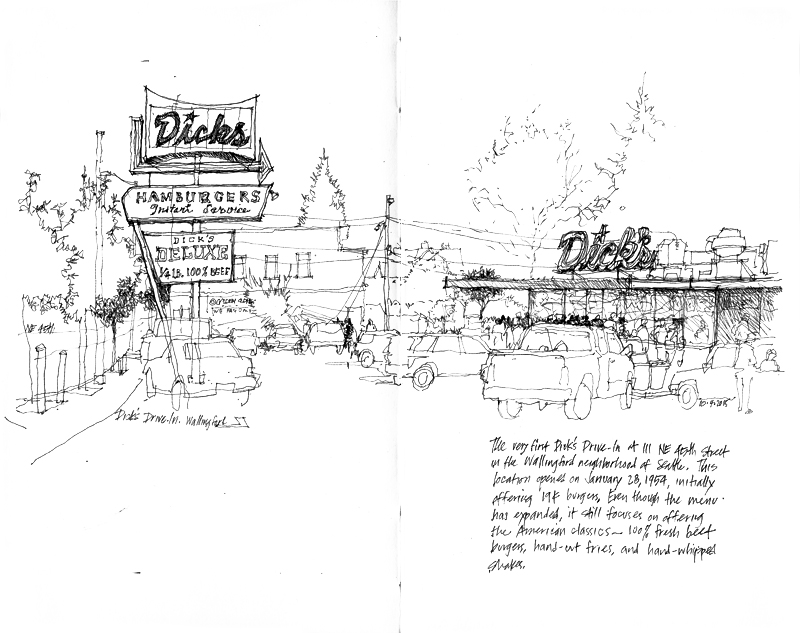 In 1953—the year Frank Sinatra signed with Capitol Records, Dwight D. Eisenhower was elected U.S. President, and Elvis Presley made his first recordings—Dick Spady, Warren Ghormley, and Tom Thomas had an idea for a place where one could park easily and enjoy quality food at low prices with instant service. Despite bank executives not believing in this business model, the first Dick’s Drive-In opened on January 28th, 1954, at 111 NE 45th Street in the Wallingford neighborhood of Seattle. Initially offering 19-cent burgers, Dick’s menu has expanded but still focuses on the American classics—100% fresh beef burgers, hand-cut fries, and hand-whipped shakes.

With just six locations, Dick’s remains a Seattle institution, not only due to its burgers, fries, and shakes, but also because it offers fair wages, provides employer-paid health insurance coverage to all of its employees, grants employee education scholarships, and gives generously to local charities that serve the homeless. 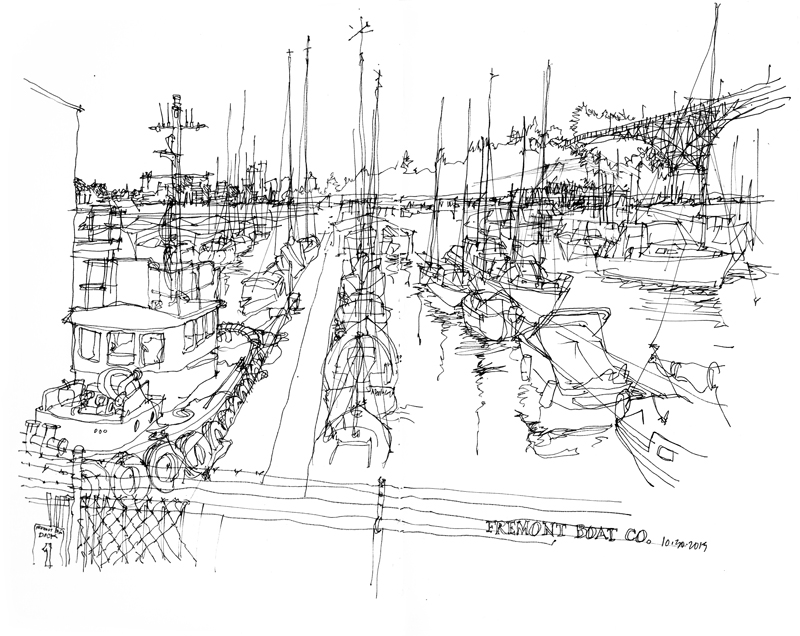 In a recent issue of The New Yorker, John McPhee wrote an article entitled Omission: Choosing what to leave out. In the essay McPhee references Ernest Hemingway’s Theory of Omission, which encourages writers to let the reader do the creating by leaving white spaces between chapters or segments of chapters, the unwritten thoughts to be articulated by the reader. McPhee advocates letting the reader have the experience and leaving judgment in the eye of the beholder.

This idea of omission can also be applied to drawing as well. Just as writing is a matter of selecting and stringing words together to create a sentence, a paragraph, or a chapter, sketching is a matter of drawing a line, then another, and another, until one creates shapes and compositions that recall to the seeing eye the scene set before us. And what we omit from a drawing is just as important as what we include.