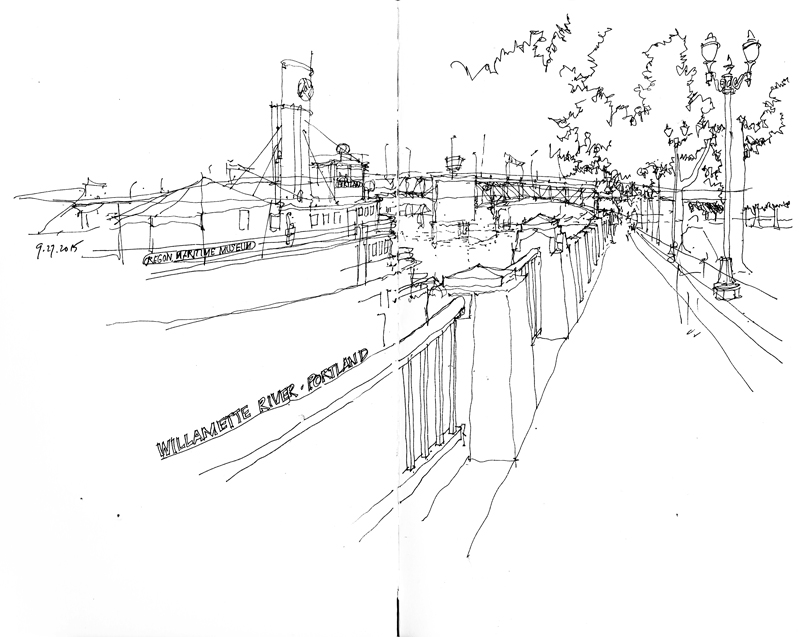 I spent an enjoyable weekend in Portland co-teaching a Line-to-Color workshop with Gail Wong. We had the benefit of pleasant weather, Portland offers great sketching sites, and we had the opportunity to work with an ardent group of sketchers. As in any workshop, there is little time to sketch on one’s own but I managed to do one before the group met on Sunday morning and a couple more later on in the afternoon when members of the Portland Urban Sketchers joined our group at the Portland Saturday Market site on the riverfront. 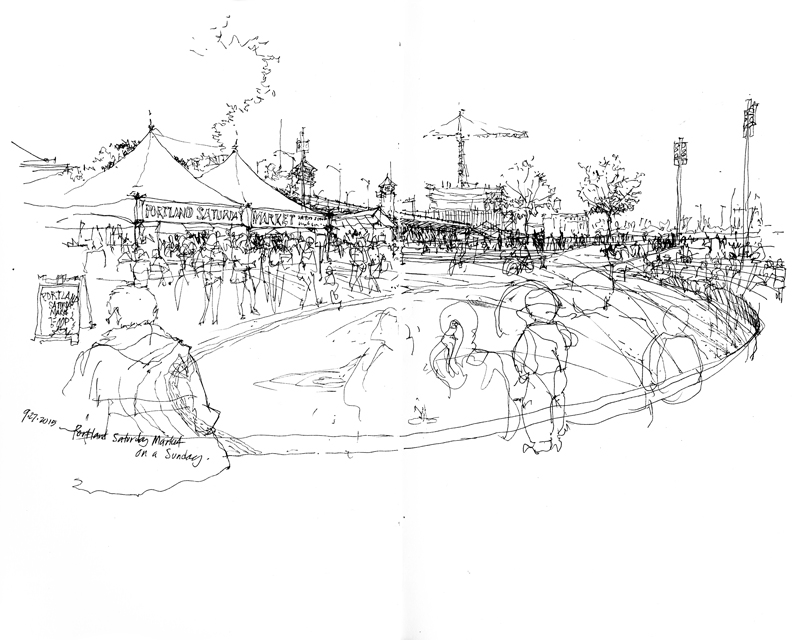 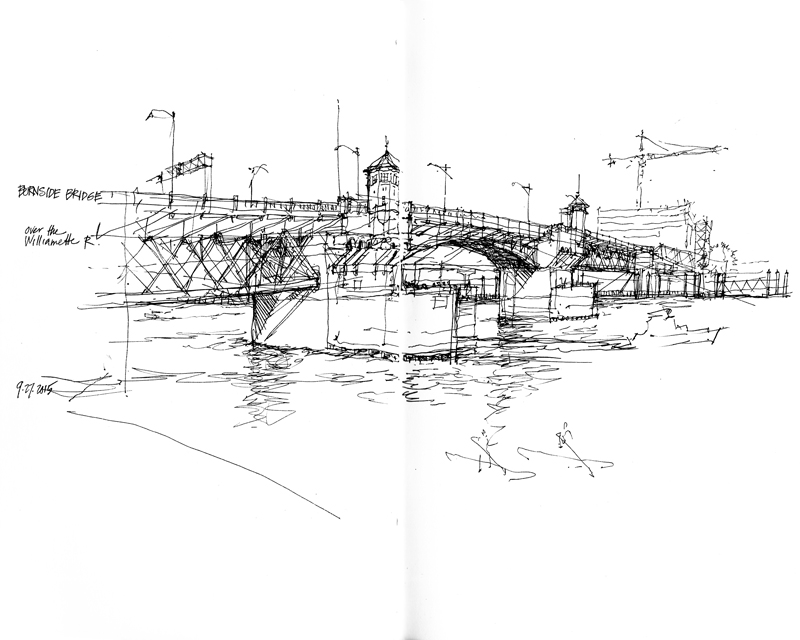 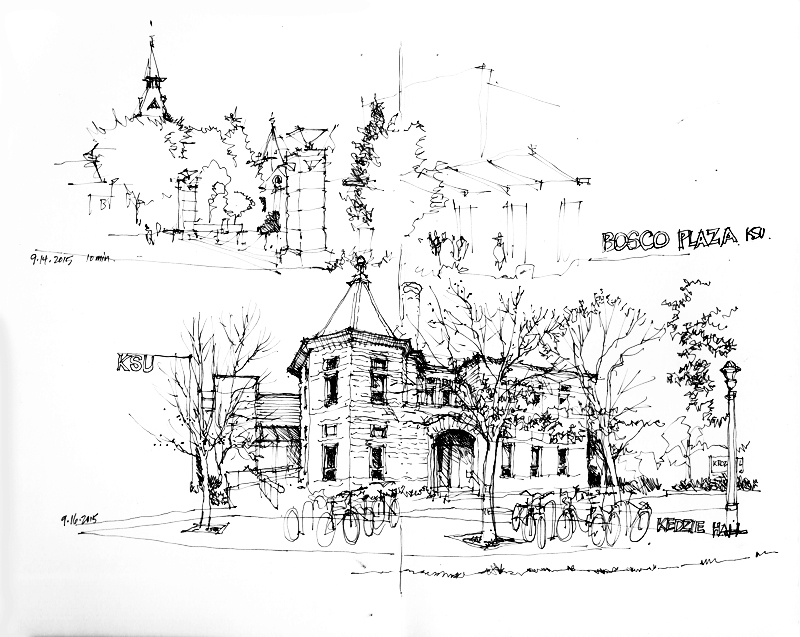 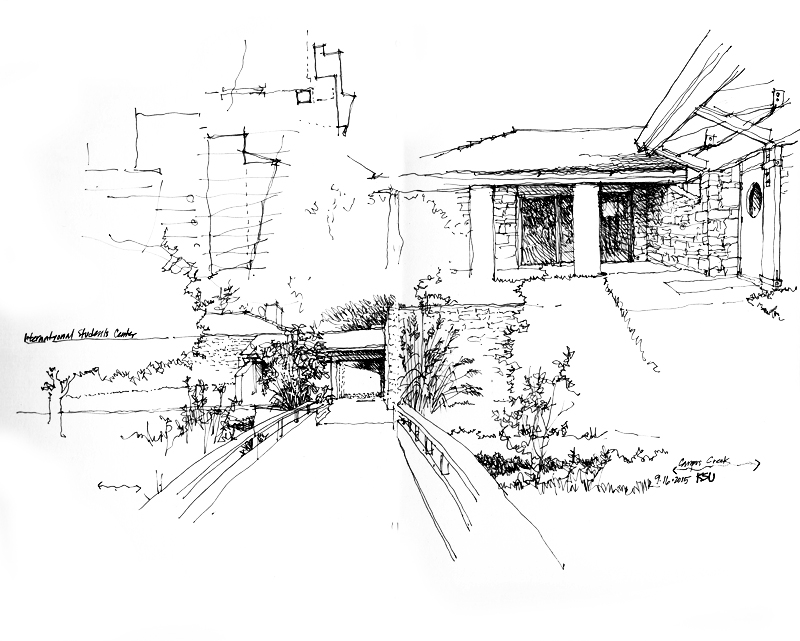 Here are a few more sketches from my recent visit to Manhattan, Kansas. The second is of the International Student Center, which I studied because of its unusual inward orientation to a courtyard, unlike most of the other structures on the KSU campus. 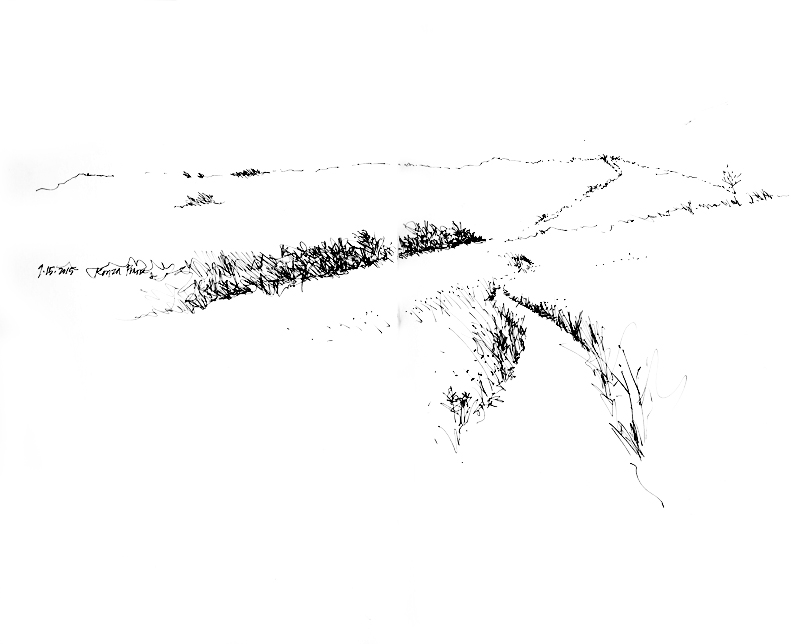 I did this very quick sketch during a walk through the 8000-acre Konza Prarie, a former cattle ranch and now a tallgrass prarie preserve in the Flint Hills of northeastern Kansas, jointly owned by the Nature Conservancy and Kansas State University, which conducts ecological research and manages conservation in the preserve. I drew only the path ahead of me and a treeline in an arroyo between two ridges. All of that white space you see are prarie grasses, a mix of big bluestem, little bluestem, Indiangrass, and switchgrass. 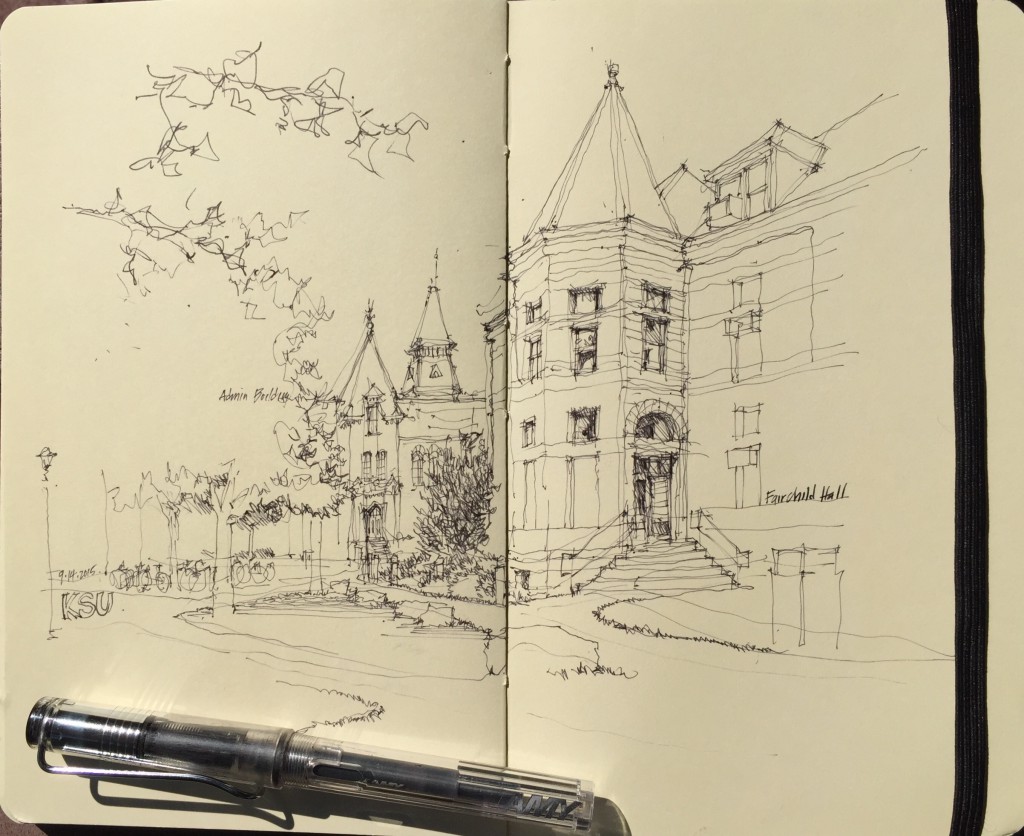 A quick sketch of a scene on the Kansas State University campus in preparation for two days of workshops for beginning students in the College of Architecture, Planning & Design. 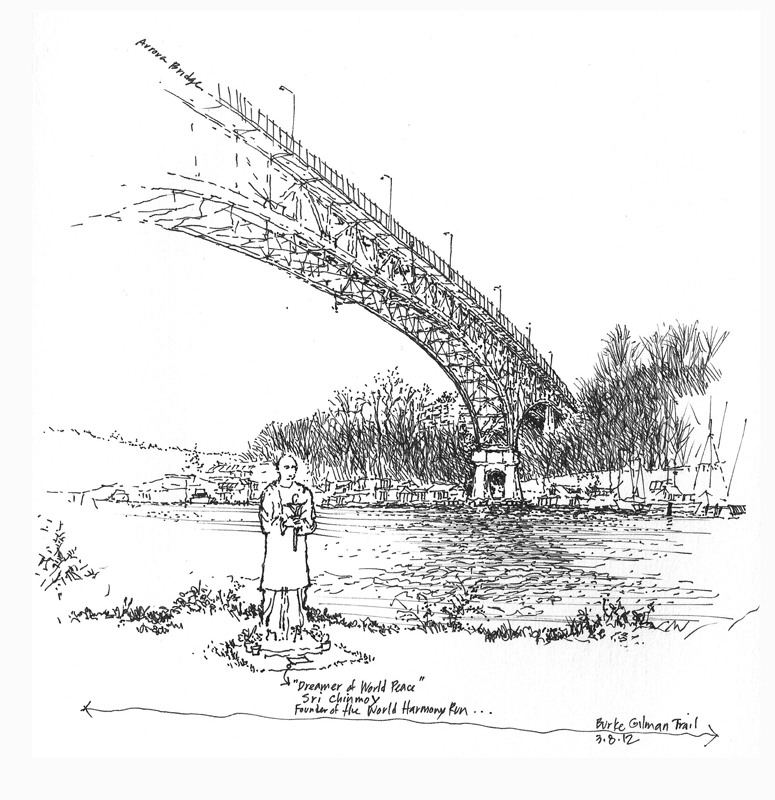 Three years ago, I sketched this view from the Burke-Gilman Trail of the Aurora Bridge as it spans the Ship Canal in Fremont. Yesterday, I took the opportunity of the sunshine to draw this view from further east along the Burke-Gilman, where the dock of the Lake Washington Rowing Club juts out into the waters where the Ship Canal meets Lake Union. On the right, nestled below the Aurora Bridge, you can see a few of the many houseboat communities along the shores of Lake Union. 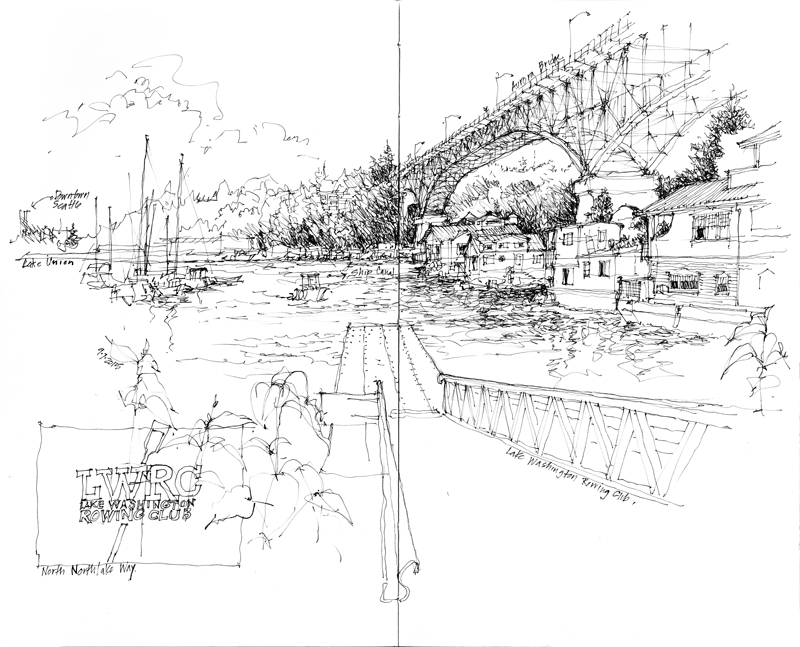 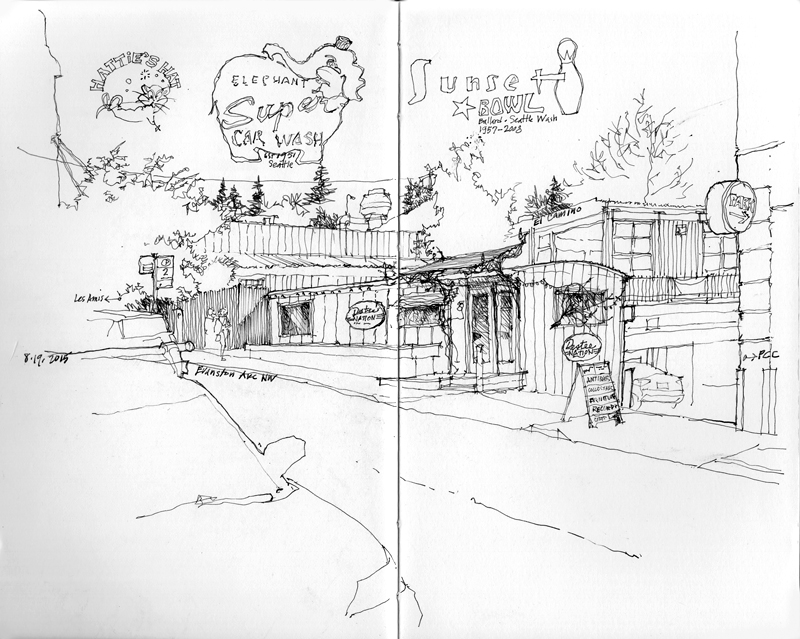 This is Destee-Nation Shirt Company’s retail outlet in the Fremont neighborhood, snuggled next to Les Amis just west of the PCC market. Destee-Nation designs, silk-screens, and sells T-Shirts featuring the logos of locally owned small businesses and other cultural landmarks of Seattle. In addition to gaining permission to use these icons, Destee-Nation gives a percentage of each sale to the neighborhood diner, vintage record store, or mom-and-pop shop being represented. A few are included in the scene above.

Since its beginning in 2004 at its Greenlake warehouse here in Seattle, Destee-Nation has since expanded its offerings to include the logos of small businesses in other states, such as Arizona, California, Texas, and Hawaii.