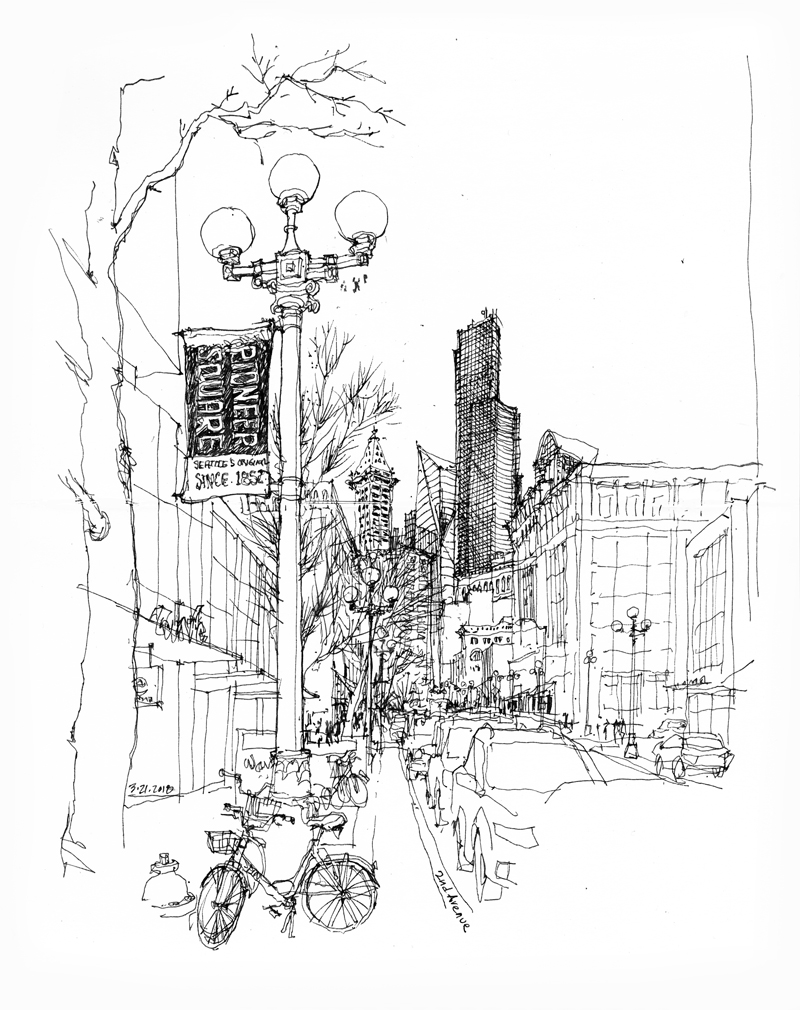 A view of Second Avenue in Pioneer Square looking north toward the Smith Tower, Columbia Center, and in between, the recently completed F5 Tower, forming a distinctive skyline of downtown Seattle. 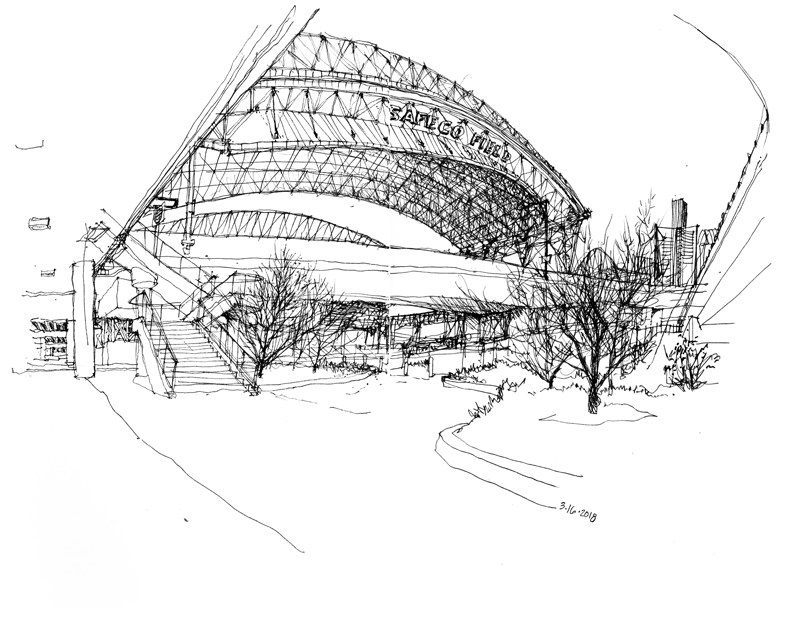 With opening day for the 2018 MLB season approaching, I thought it might be appropriate to post these sketches of Safeco Field, home of the Seattle Mariners. The stadium, designed by NBBJ and 360 Architecture along with the structural engineering firm of Magnusson Klemencic Associates, features a retractable roof that serves as an umbrella during inclement weather. 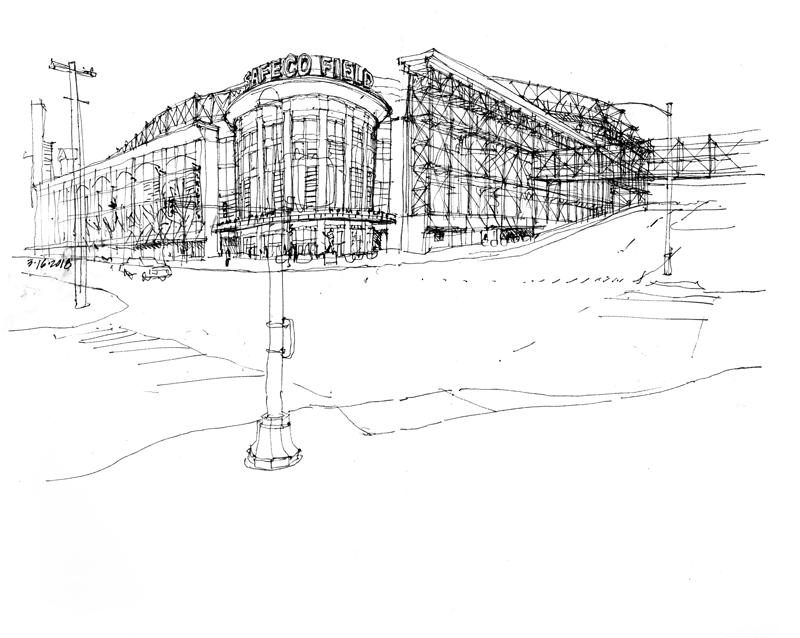 Although King County voters had initially turned down a proposal to fund a new baseball stadium to replace the aging Kingdome, the Mariners’ first appearance in the MLB postseason in 1995 and their victory in the American League Division Series reignited a public drive to keep the team in town. As a result, the Washington State Legislature approved an alternate means of funding comprising a mix of food and beverage taxes in King County restaurants and bars, car rental surcharges, a ballpark admissions tax, and sales of a special stadium license plate.

The stadium is often referred to as “The House that Griffey Built” because many believe major league baseball would not exist in Seattle without Ken Griffey, Jr.’s outstanding career with the Mariners. Griffey helped break ground for the new stadium in 1997 and a capacity crowd of 47,000 attended the Inaugural Game against the San Diego Padres on July 15, 1999. 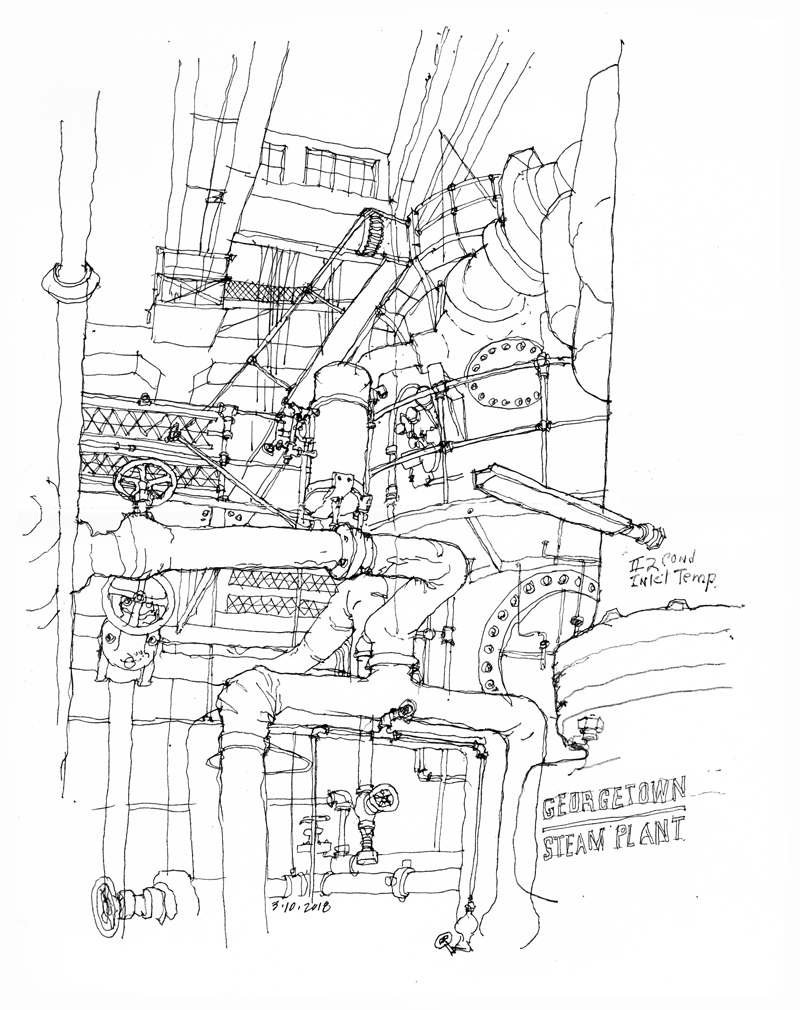 Designed by Frank Gilbreth and built in 1906 for the Seattle Electric Company, the Georgetown Steam Plant is an early example of a reinforced concrete structure. It houses two vertical Curtis steam turbines manufactured by General Electric, which initially produced 11,000 kilowatts of power. Later, in 1919, a horizontal Curtis turbine was added, almost doubling the output of the plant. In addition to providing direct current for Seattle’s streetcar system and the interurban railway between Seattle and Tacoma, the plant also generated alternating current for Georgetown, which was at the time an independent city. In 1951, Seattle’s Department of Lighting—today’s Seattle City Light—purchased the facility and continued to operate the plant on a limited basis until 1972. 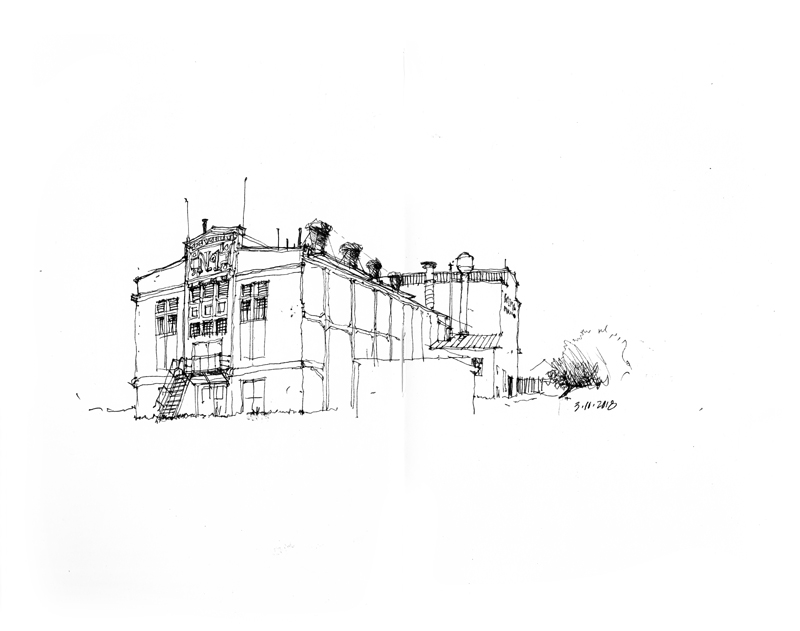 Today, the steam plant is still owned by Seattle City Light and is maintained by City Light staff and a group of volunteers as the Georgetown PowerPlant Museum. It contains operable examples of early vertical steam generating turbines, as well as reciprocating steam engines and a collection of vintage machining tools. 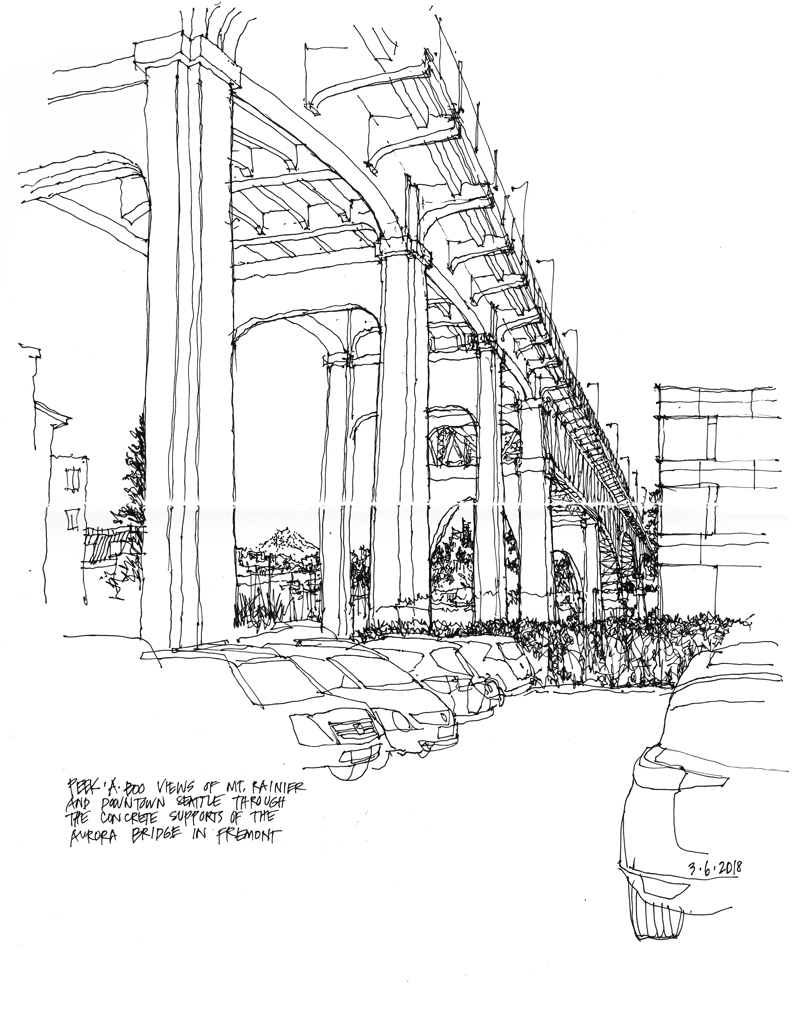 On our daily afternoon dog walk around the Fremont neighborhood, I’ve often noticed and admired this deeply layered scene. It offers a peek-a-boo view of Mt. Rainier and downtown Seattle through the openings of the concrete supports at the north end of the Aurora Bridge in Fremont. 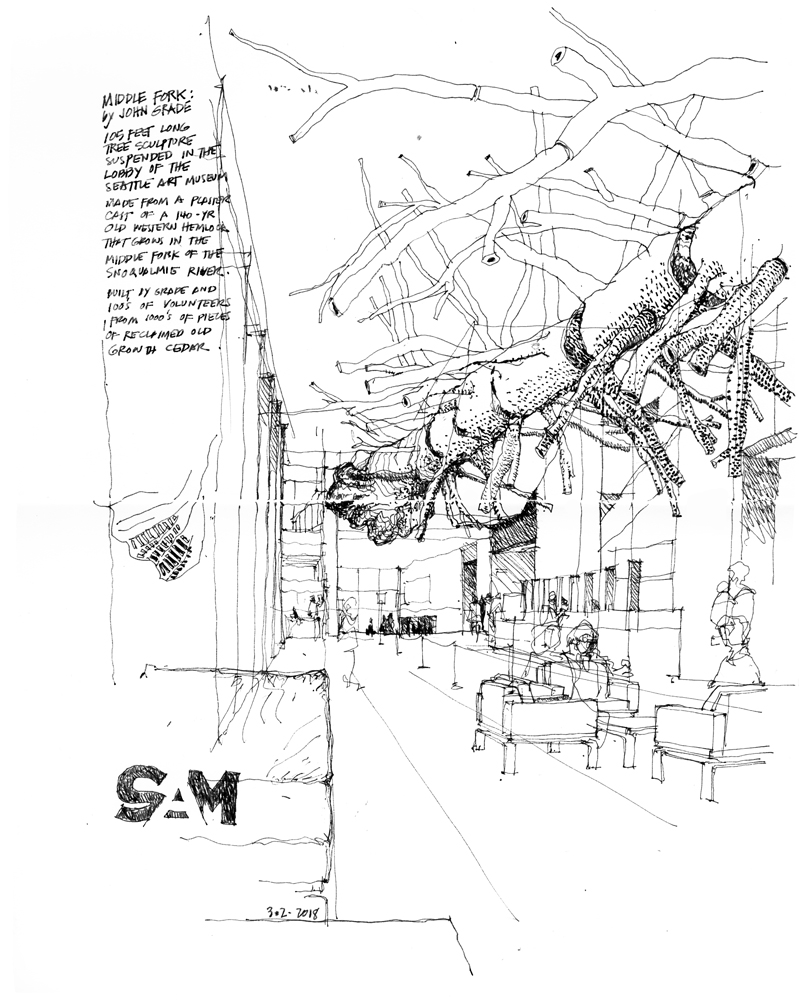 Hanging in the lobby of the Seattle Art Museum is this 105-foot long tree sculpture by John Grade. Grade first made a plaster cast of a living 140-year old western hemlock growing along the Middle Fork (hence the name) of the Snoqualmie River east of Seatle. Then he along with hundreds of volunteers used the plaster mold to recreate the form of the tree from thousands of pieces of reclaimed old-growth cedar.