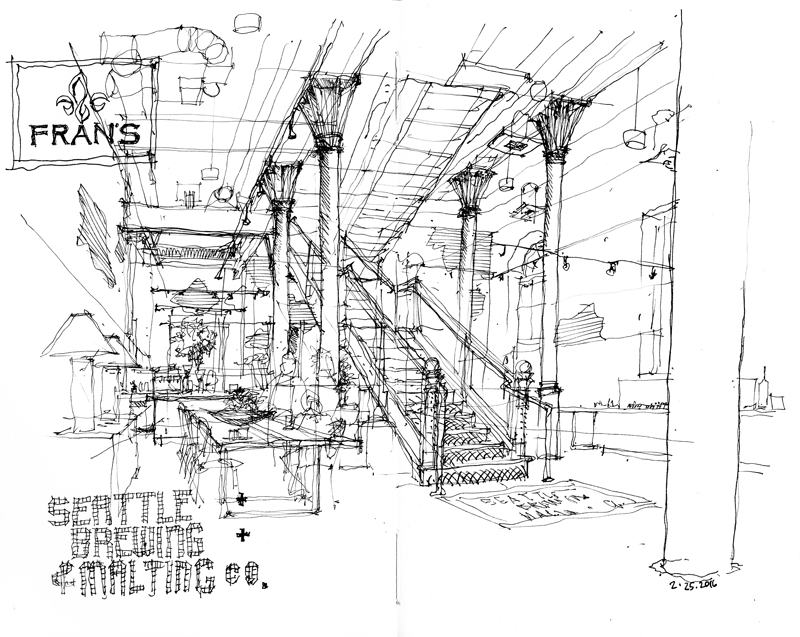 Many credit Fran Bigelow with helping to bring about the artisan chocolate renaissance in the U.S. Earlier this year, she opened her fourth retail store in the original Seattle Brewing and Malting Company building in the Georgetown neighborhood, built in the 1880s. The grand old structure now houses Fran’s production facilities as well as an elegant showroom of Fran’s signature chocolate truffles, bars, and caramels. 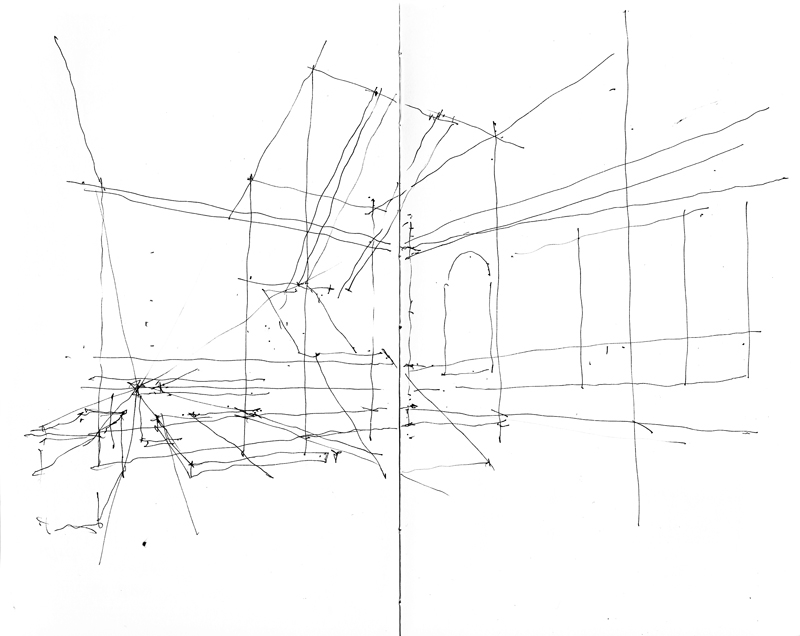 This second drawing shows how I blocked out the initial structure for the scene above. 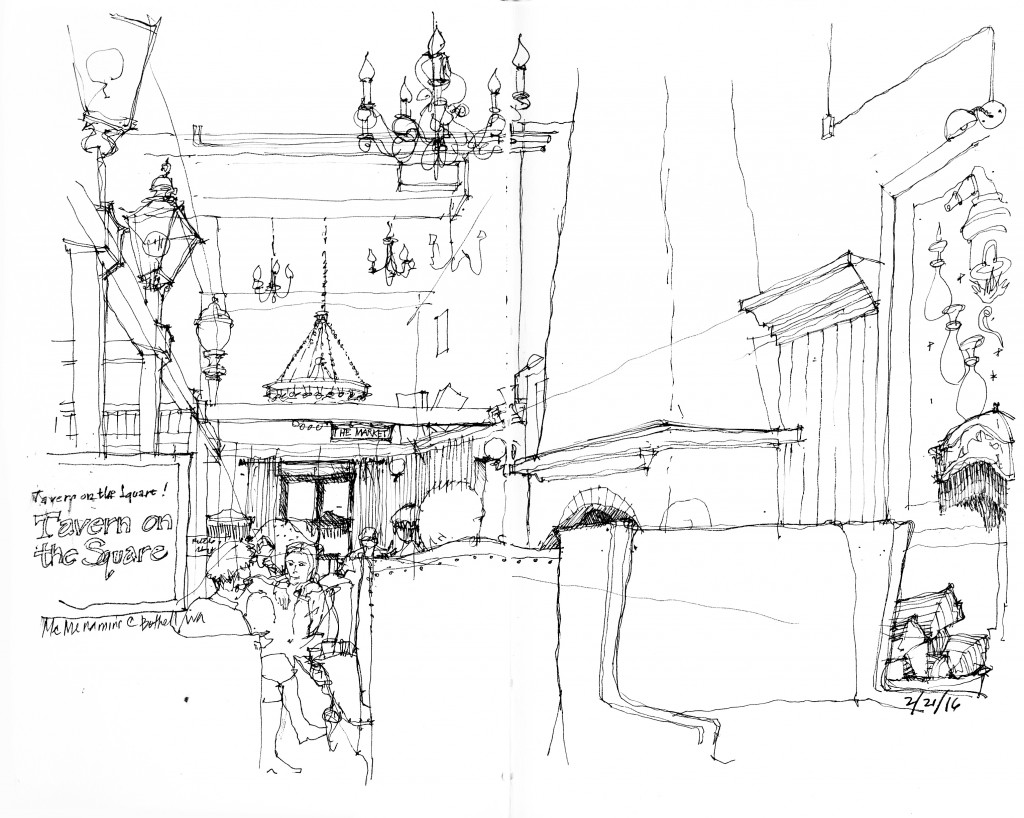 I drew this view of the lounge space adjoining the Tavern on the Square restaurant when the Seattle Urban Sketchers met yesterday at McMenamin’s–Anderson School. McMenamin’s is a chain of brewpubs, hotels, and music venues, mostly in the Portland area but with other locations in Oregon and Washington; many are housed in historical properties. Their latest venue is the Anderson School complex in Bothell, north of Seattle. Originally built in 1913 as the Bothell Junior High School, it was renamed in 1956 to honor the school’s first principal, W.A. Anderson.

This view was sketched in the cozy space of The Shed while enjoying the warmth of a wood-burning fireplace and a glass of McMenamin’s Centinel IPA served by James the friendly bartender. 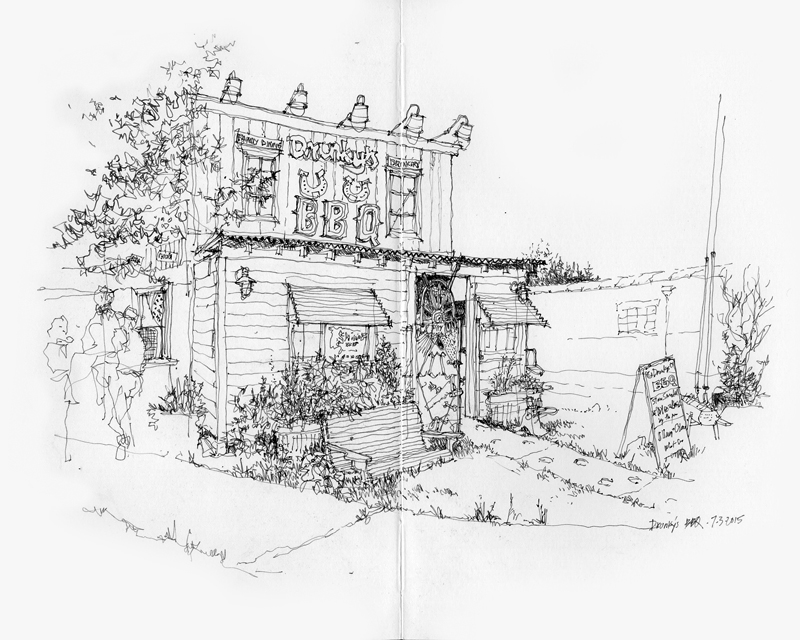 I had already drawn this exterior of Drunky’s Two Shoe BBQ joint in July of last year. So when a group of Seattle Urban Sketchers met there again last Friday, I drew this interior view while sitting at the bar enjoying a beer and a plate of beef brisket and potato salad. 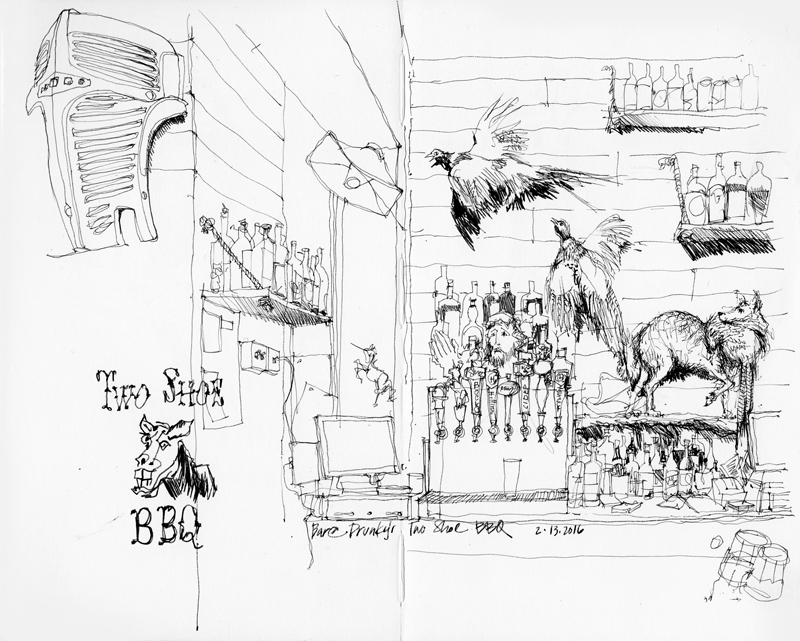 Thoughts and prayers to the people of Tainan in the wake of last week’s earthquake. Originally established by the Dutch East India Company as Fort Zeelandia, Tainan is one of Taiwan’s oldest cities and served as its capital for over 200 years. One of my memories from visiting this ancient city is Guan Di Temple, built in the 17th century. Guan Di was a legendary hero of the Three Kingdoms Period and is worshipped in both Chinese Buddhism and Taoism 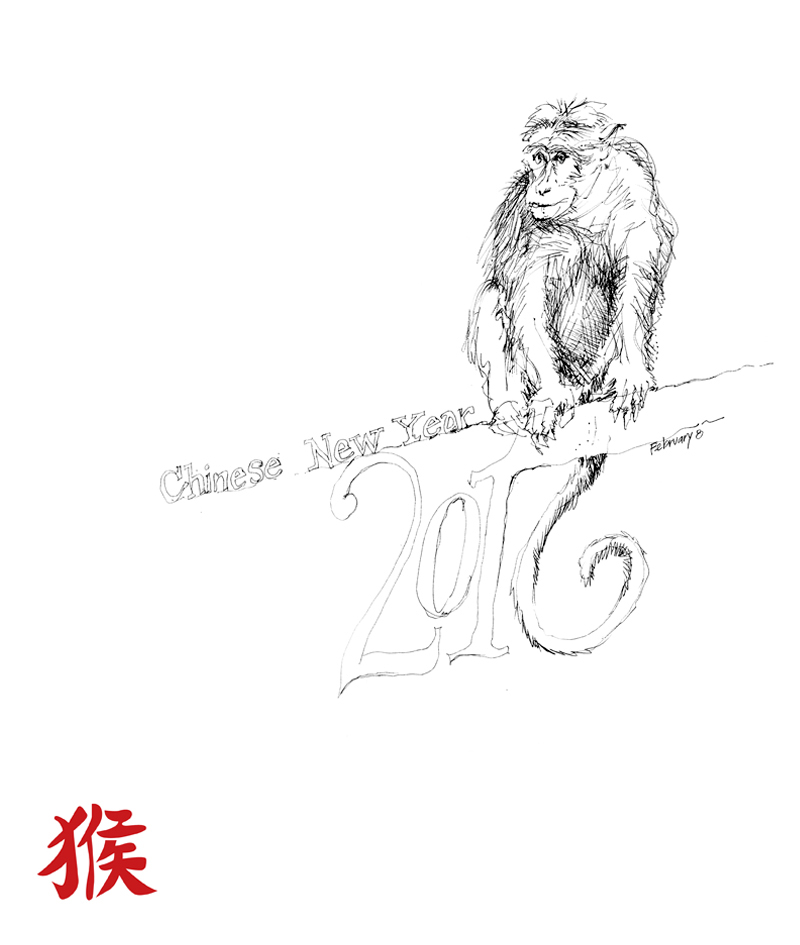 The Chinese New Year typically falls on the second full moon after the winter solstice. This year, that date is February 9 and 2016 is the Year of the Fire Monkey. The monkey is said to be clever while fire brings energy and determination to those with this sign. Among those born in the Year of the Monkey are Julius Caesar, Leonardo da Vinci, Charles Dickens, and Mick Jagger. 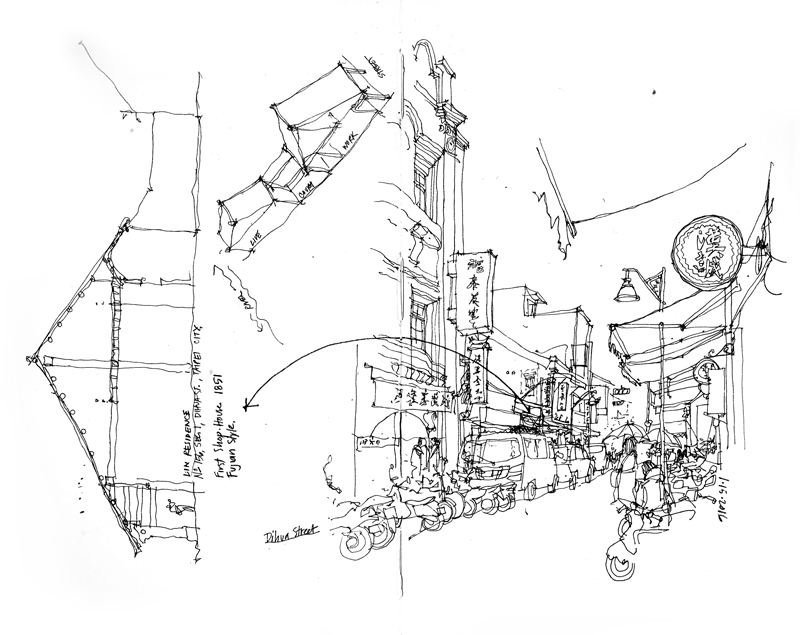 Lining Dihua Street in the Datong District of Taipei are historical shophouses, many of which are selling Chinese herbs and medicines, especially for the upcoming Chinese New Year festivities. The 19th-century shophouse is characteristic of many Southeast Asian cities, combining a shop or working space facing the street with living quarters either above or to the rear of a deep, narrow lot.

The Lin Shophouse, built in 1851, is said to be the first shophouse along Dihua Street. I first drew a partial section of the front “shop” part of the structure as I walked through the spaces and then sketched an overview of the complex showing how the shop space faces the street and is separated by a courtyard from the living quarters in the rear. In the street view, one hardly notices the Lin Shophouse as it has been obscured by later shophouses that rose two or three stories high, with Baroque-style facades that were popular during Japan’s Taisho Period.