During our field trip south to Pompeii and Amalfi, we had the opportunity to visit Matera through the generosity of the Unione Italiana Disegno, who invited me and the entire UW group to their conference that was being held there.

While in Matera, we had a tour of the Sassi, a dense network of dwellings carved out of the local tufo stone and interwoven with stone alleys and stairways. Even though many of the original rock-cut spaces are hidden behind the facades and walls built from the stone removed to create the underground dwellings, we were fortunate to get a glimpse inside one of the structures to see what the original cave spaces might have looked like. The upper drawing is looking from the Sasso Barisano to some of the caves across the glavine; filling the space below is a view of the Sasso itself. 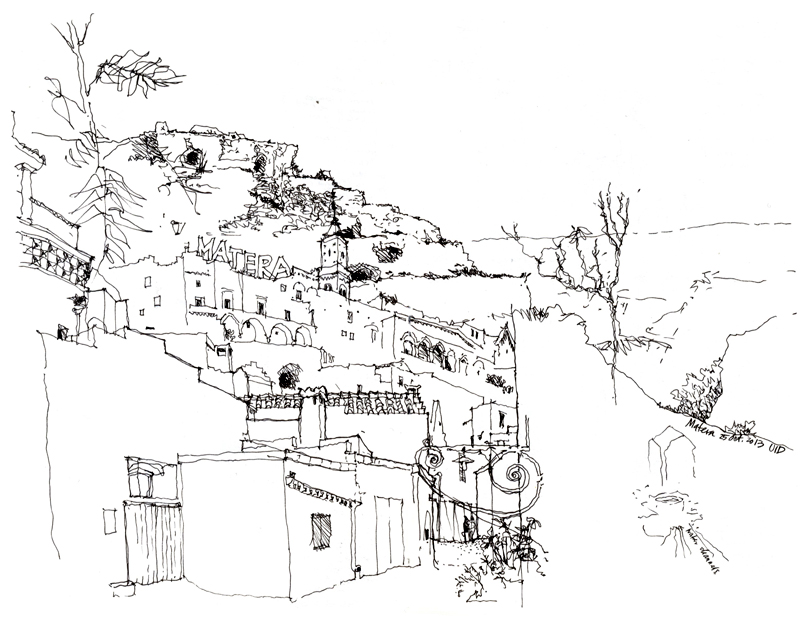 Quoting from the Comune di Matera’s website: “Looking at the structure of the Sassi we can clearly see the social and architectural evolution of mankind, from simple dugout shelters, to caves with facades, to the construction of roofs on which to create vegetable gardens; and the evolution of the social structure of a community – human interaction amongst individuals, families, dwellings, neighborhoods and churches, from rural to urban. In 1993 UNESCO declared the Sassi of Matera a world heritage site, describing it as “the most outstanding, intact example of a troglodyte settlement in the Mediterranean region, perfectly adapted to its terrain and ecosystem. The first inhabited zone dates from the Palaeolithic, while later settlements illustrate a number of significant stages in human history.”

Many thanks to Dr. Salvatore Barba of the University of Salerno and Francesco Ferraris for their gracious hospitality during our visit to Matera.

Similar to the drawing of the archway of the Portico of Octavia, this sketch compresses three layers of history in the heart of Rome—in the right foreground, the facade of the Palazzo Nuovo designed by Michelangelo in the 16th century; rising in the background, the Vittorio Emmanuele II Monument built in the early 20th century; and caught in between but the oldest, S. Maria in Aracoeli, a basilica whose origins date back to the 6th century, erected atop an ancient Roman insula. To the right stands the equestrian statue of Marcus Aurelius that is situated in the center of the trapezoidal piazza.

Here’s a view looking through an archway of the Portico of Octavia toward the Theater of Marcellus, with just a hint of the apartments built atop of the theater in medieval times. The elements on the left are of the scaffolding supporting restoration work on the portico. 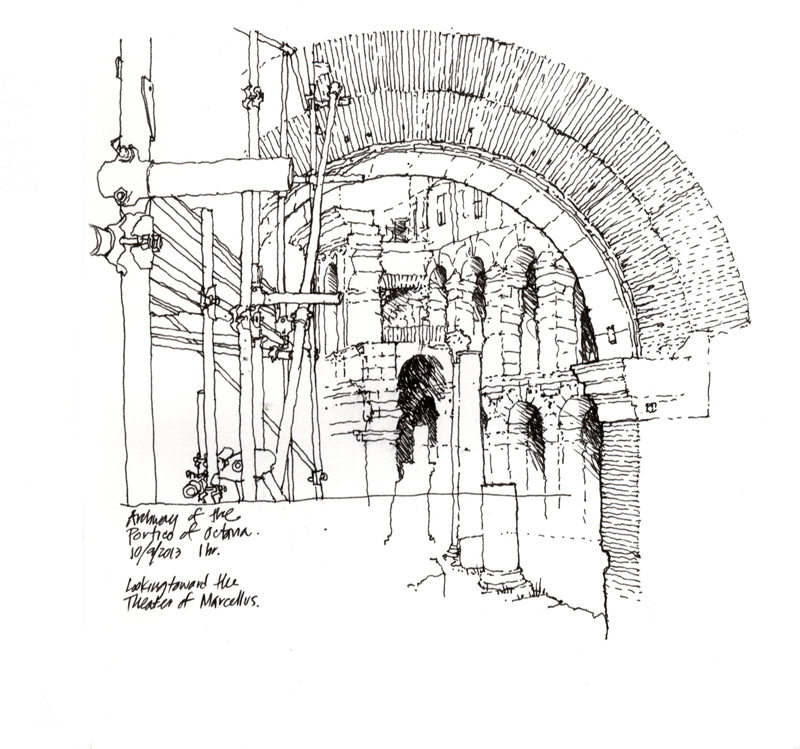 What attracted me to this scene is the way it compresses space and time. Almost everywhere you walk amid the skewed street spaces, buildings, and monuments in the centro historico district, one encounters these layers of history so typical of Rome.

This past Sunday, I attended the 10 am Mass at Santa Maria in Trastevere, a basilica that feels like a normal parish church rather than one that simply attracts tourists. Compare this view from my usual position, seated in the rear and to the left, to a similar one of Blessed Sacrament Church that I did back in mid-September.

The basilica is believed to have its origins in the 4th century, being rebuilt in the 12th century and restored several times since then. Notable are the beautiful medieval mosaics, the Cosmatesque flooring, and the 22 Ionic and Corinthian columns that line the nave, which were brought from the Baths of Caracalla and other sources. 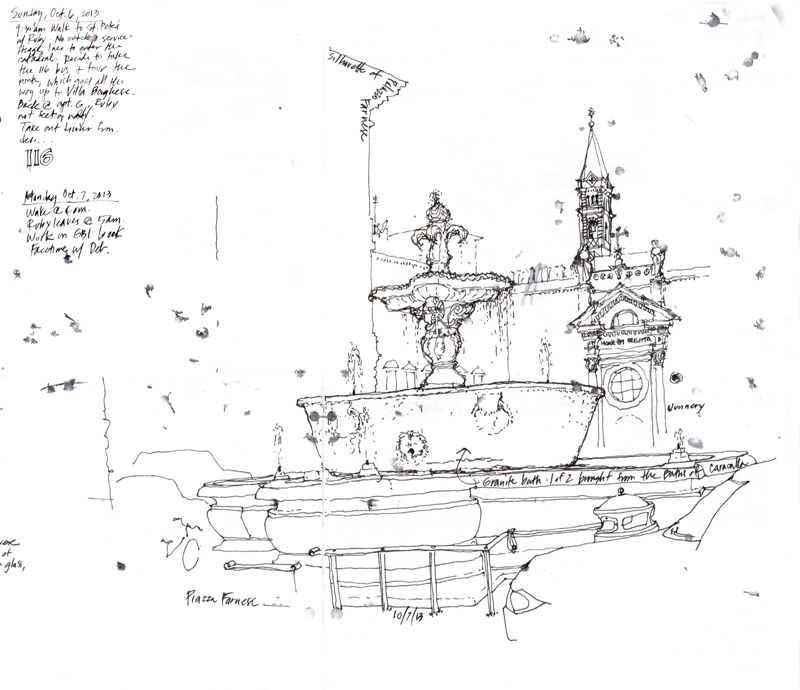 Early Monday morning, I walked over to Palazzo Farnese, but instead of drawing the palazzo, I chose this view of one of the huge granite tubs brought to the square from the Baths of Caracalla in the 16th century. You can see evidence of the raindrops that began falling on the pages and their imprints as I closed my sketchbook.

Getting settled in Rome and into the rhythm of field walks, drawing sessions, and studio classes. But before posting views of Rome, I want to share a couple of snippets from our visit to Lago di Como and Milano. 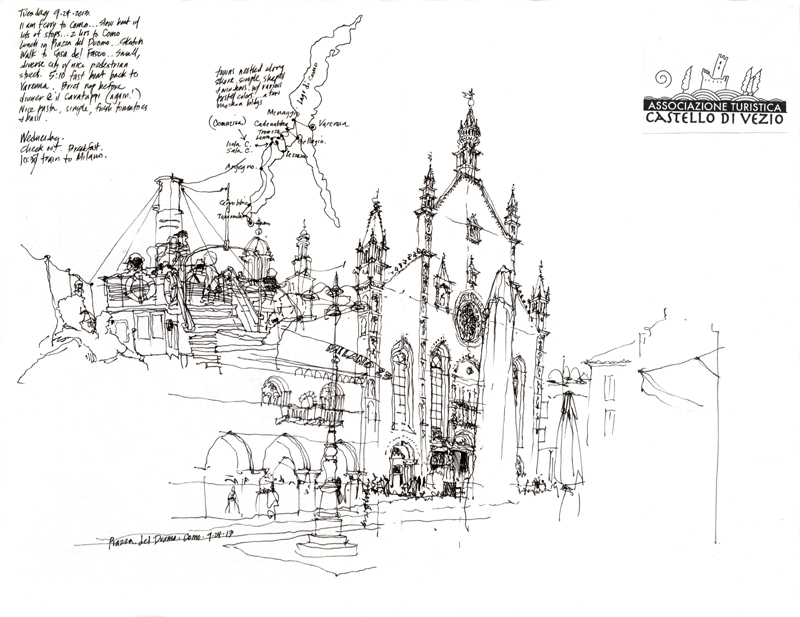 The first view on the left is from the open deck of a ferry my wife and I took from Varenna to Como, which merged with a later, more expansive view of the cathedral in Como. This is an example of how we often compose the pages of our journals in an improvisational manner, thinking not only of the composition of a view but also how it might be placed on a page or across two pages to interact with previously placed writings or drawings. Sometimes, the result is purely accidental and happily so. 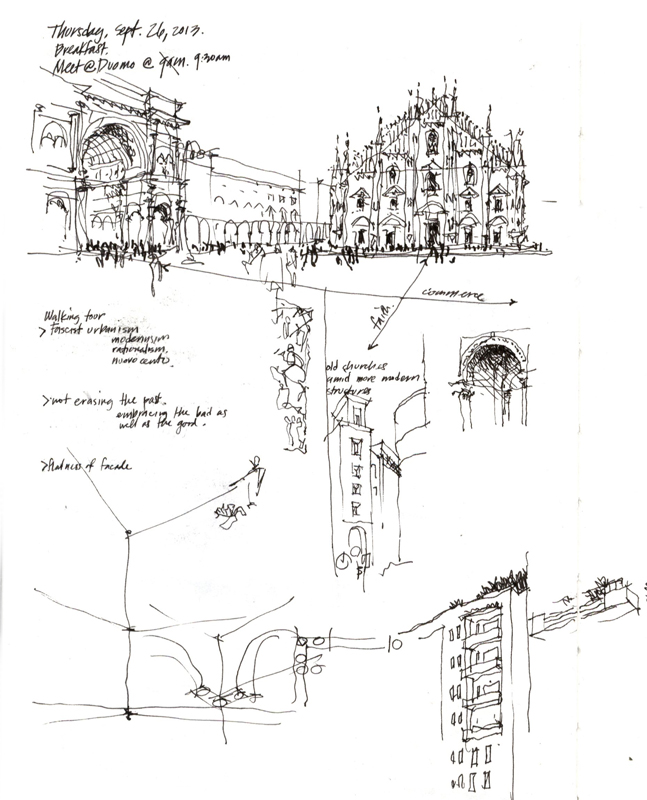 The second view is a very quick sketch to capture not just the Duomo in Milan or  the Galleria but rather the relationship between the two—a church of faith and a church of commerce.