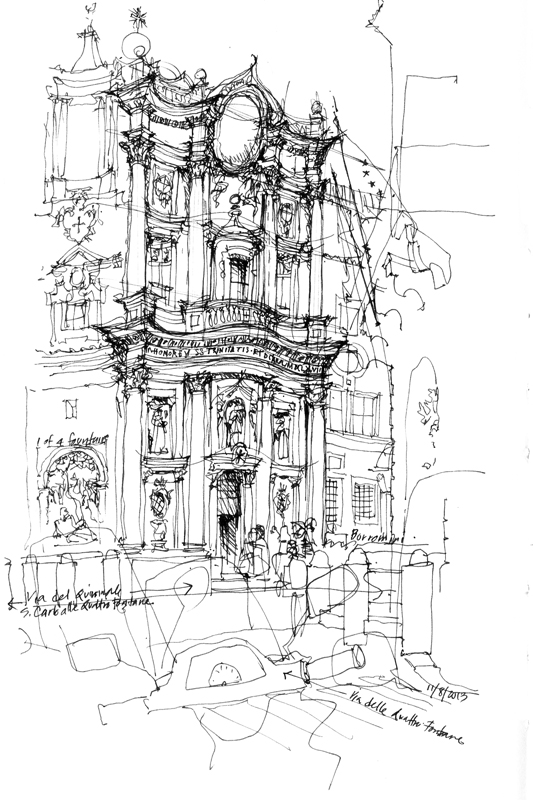 Designed by Francesco Borromin, San Carlo alle Quattro Fontane is an iconic masterpiece of Baroque architecture, built in the 17th century as part of a complex of monastic buildings on the Quirinal Hill, at the southwest corner of the intersection of of Via XX Septembre and Via delle Quattro Fontane. Four fountains (Quattro Fontane) mark the corners of the now narrow and busy intersection. It’s difficult to capture the complex nature of the undulating facade as it weaves its way across the two-story, three-bay structure, with smaller columns framing niches, windows, and sculptures. 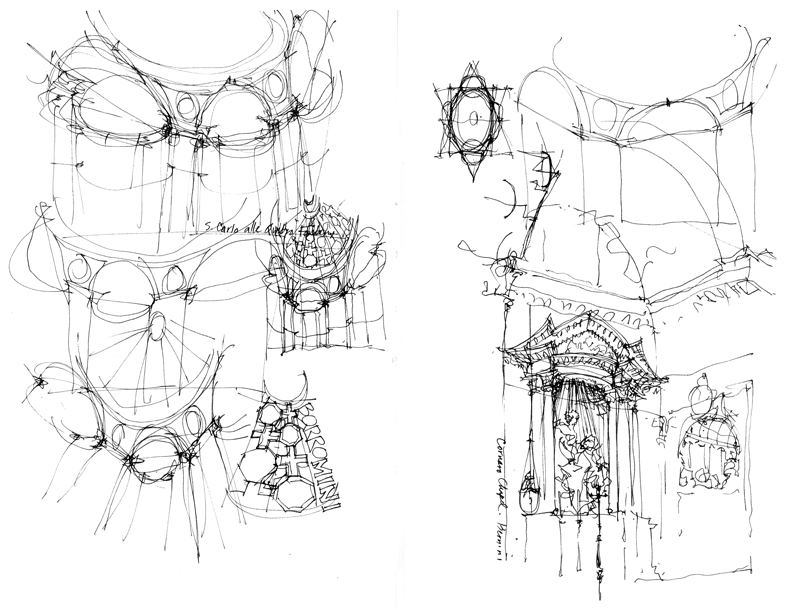 These are a few quick sketch studies of the interior. While initially appearing to be complex, the spatial geometry can be understood with just a little bit of analysis. 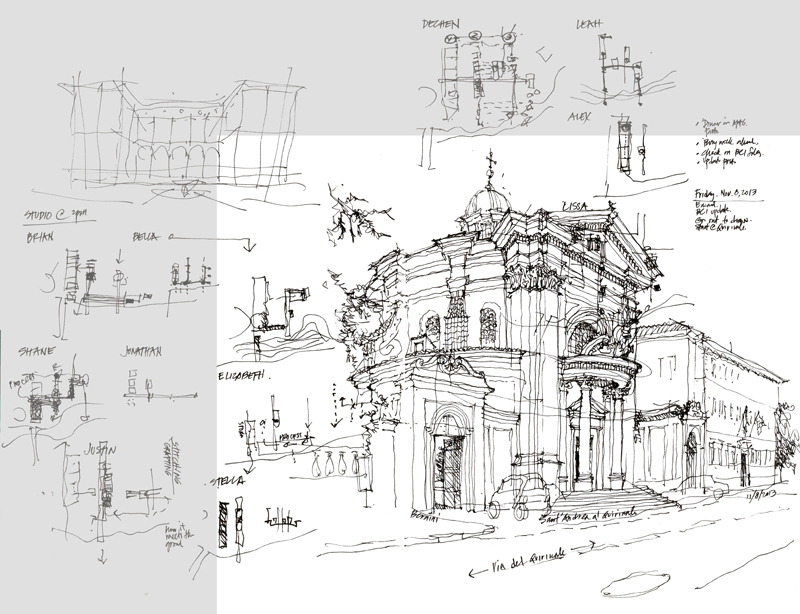 Just down the street from San Carlo alle Quattro Fontane is Sant’Andrea al Quirinale, another important work of Baroque architecture, designed by Gian Lorenzo Bernini, and the third Jesuit church built in Rome, after the Church of the Gesú and Sant’Ignazio. The reason for the grayed out area is that I had decided to draw this view over two pages already filled with notes I had taken of student design projects.

In 1563, Michelangelo used a section of what remained of the Baths of Diocletian to house Santa Maria degli Angeli e dei Martiri. What I like about the vaulted transept space shown here is that, while standing in it, one can feel the grandeur and immense scale of the spaces within the Roman baths. 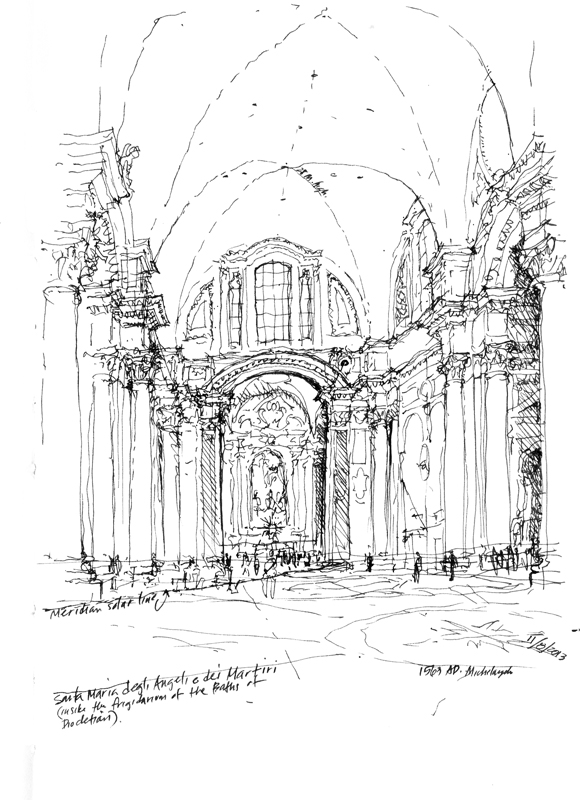 Noted on the drawing is the meridian solar line, which was commissioned by Pope Clement XI in the 18th century to verify the accuracy of the Gregorian calendar. Astronomer and mathematician Francesco Bianchini installed the brass line across the floor of the church at longitude 12°30’E. At noon each day, the sun, if it is out, shines through a small hole in the south wall to cast its light on the line, marking the progress of the sun through the year. 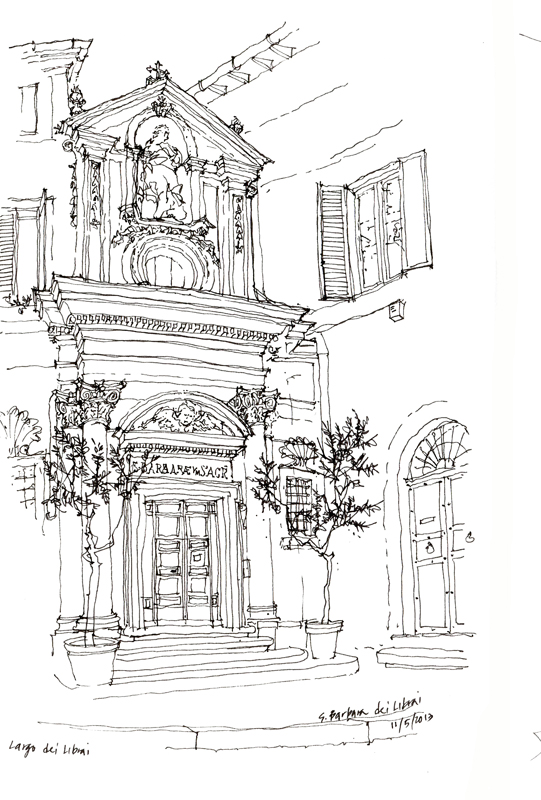 Tucked away at the end of Largo dei Librari just off of Via Giubbonari is this tiny church, hemmed in by taller buildings on both sides. Like much of the area, it’s foundations were constructed over the ruins of the Theatre of Pompey sometime in the 11th century. This church was rebuilt in the Baroque style in 1680, and restored in 1858.

Atop the Janiculum Hill (Gianicolo) stands this monument to Giuseppe Garibaldi, one of Italy’s “fathrers of the fatherland.” 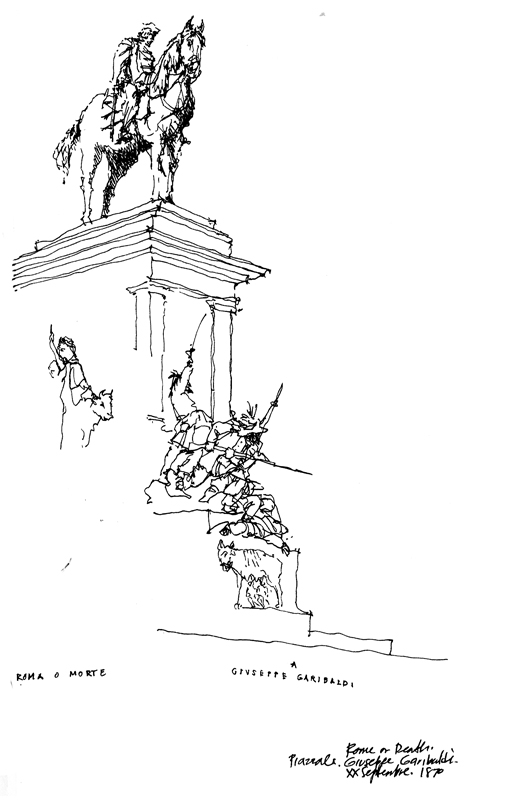 It is interesting to note that Italy as we know it was not a unified country until the 19th century. From the end of the Holy Roman Empire, it had been a shifting collection of city-states and kingdoms. The Italian unification (Risorgimento) movement was a long process in the 19th century that ended with the capture of Rome on 20 September (XX Septembre) 1870 by the Italian army under the command of General Raffaele Cadorna, who breached the Aurelian Wall at Porta Pia.

While Garibaldi was not present during the capture of Rome, he was a central figure in many military campaigns that eventually led to the formation of a unified Italy. On the monument are the words: Roma o Morte (Rome or Death). 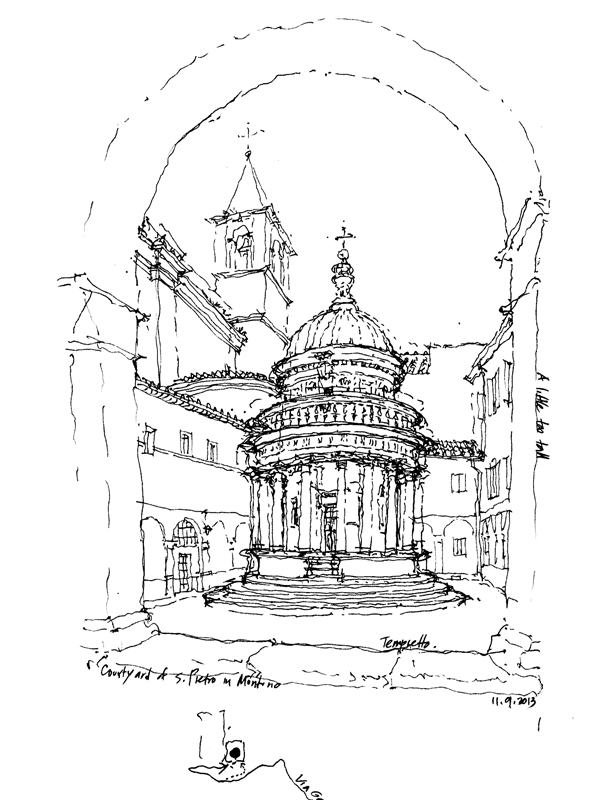 Standing in the courtyard of San Pietro in Montorio on the Janiculum Hill sits this almost ideal example of Italian Renaissance architecture by Donato Bramante. What makes classical architecture such as this beautifully harmonious work so difficult to draw is that any slight deviation from the intended proportions becomes very noticeable. I’ve attempted to draw the Tempietto several times and I still haven’t got it quite right, although this one comes close. It’s just a little too tall for its base. 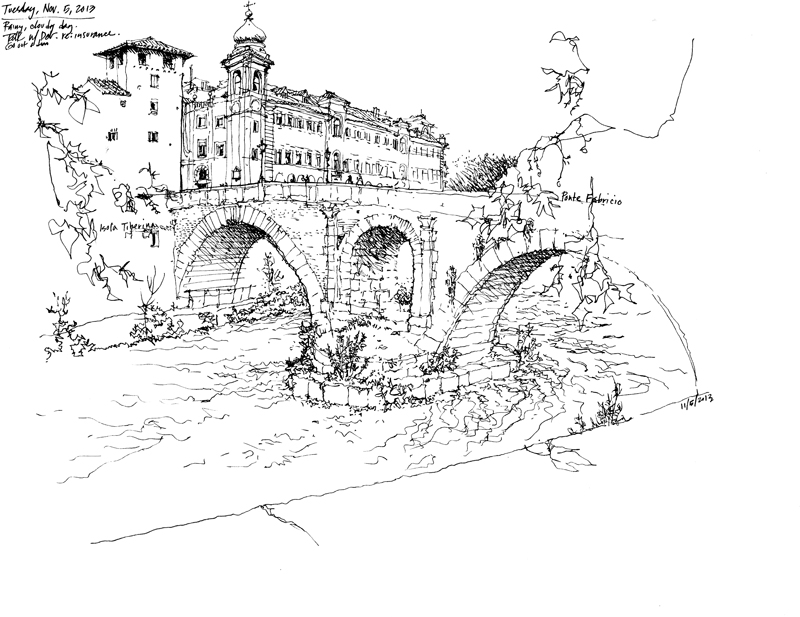 Isola Tiberina (Tiber Island) stands in the Tiber River, connected to Rome on both sides by bridges. This view shows the Ponte Fabricio, built in 62 BC and still in its original state as it crosses over to meet the island. Ever since the building of an ancient temple dedicated to Aesculapius, the Greek god of medicine and healing in the third century BC, the island has been known as a site offering protection from disease and illnesses. Even today, it remains the site of the Fatebenefratelli Hospital (Ospedale Fatebenefratelli). 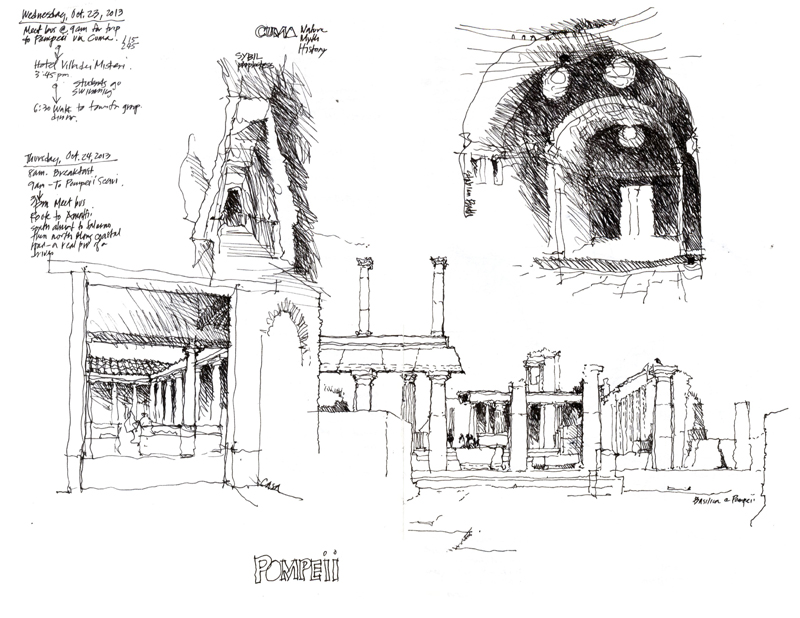 On the way down to Amalfi, we stopped at Pompeii, the infamous Roman city that, along with Herculaneum, was buried under 15 to 20 feet of ash and pumice when Mt. Vesuvius erupted in 79 AD. Declared a UNESCO World Heritage Site in 1997, Pompeii reportedly receives more than 2,500,000 visitors a year. One can imagine the wear and tear the site receives with all of this traffic but it endures as a testament to how Romans lived two thousand years ago. Even after several visits, Pompeii never disappoints.