An ad hoc group of Seattle Urban Sketchers met this morning at the Kubota Garden in the Rainier Beach neighborhood of Seattle. Fujitaro Kubota purchased the five-acre parcel of swampland in 1927 and proceeded to clear the land, dig several ponds, and create a spectacular landscape merging Japanese design techniques with North American materials. As the now 20-acre garden was threatened by developers, the Seattle Landmarks Preservation Board designated the garden a Historical Landmark in 1981. The City of Seattle acquired the grounds in 1987, which is now stewarded by the Kubota Garden Foundation. 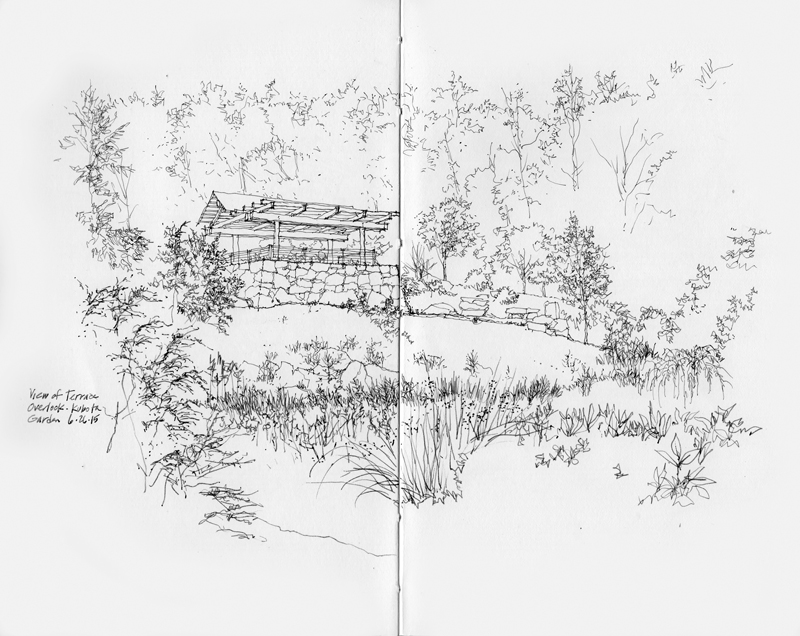 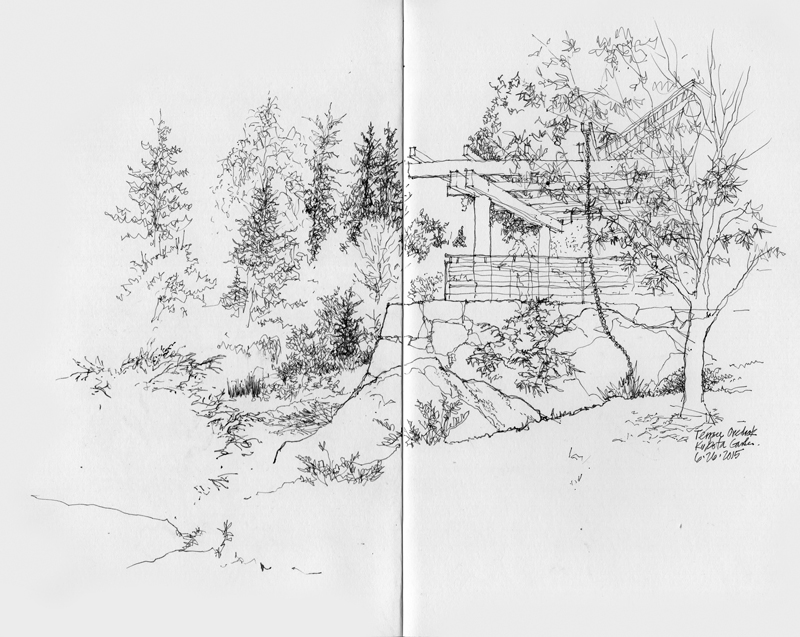 These two views is of the latest addition to the garden, the Terrace Outlook, the base of which was constructed by the Awatas, a 15th-generation family of Japanese artisan stone masons, along with a host of volunteer workers. Drawing a view dominated by landscaping and plant materials with a fountain pen requires paying attention to the various textures of the plant materials and using patterns of light and dark shapes to create implied layers of depth.

One could spend an entire day sketching in the Kubota Garden and so I plan on returning to capture more views. 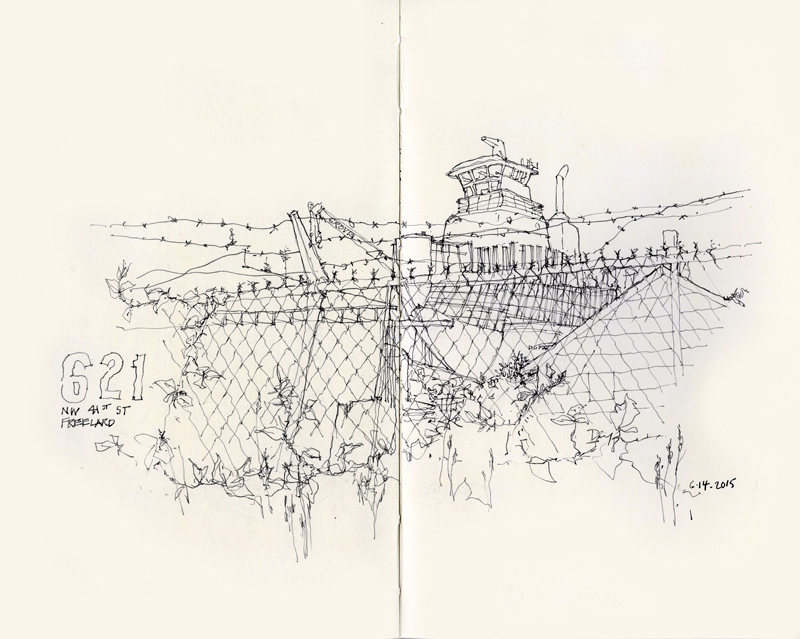 Having filled one sketchbook, I pulled a new one off the shelf to do this drawing. In beginning, I was instantly reminded of how the change from an absorbent surface to one treated with sizing affects the quality of lines from a fountain pen. Where I was used to being more tentative with thicker lines in my last sketchbook, I had to be more insistent with the thinner, lighter lines on the Moleskin paper.

This view is typical of the shipbuilding and related industries fronting the Ship Canal in the area between Fremont and Ballard, which some people are calling Freelard. I decided to begin with the barbed-wire-topped chain link fence and blackberry bushes that separated me on the street from what I was viewing, a ship under construction. The drawing ended up being more of a vignette than I had intended but that is the nature of sketching. Like a conversation, the drawing process can often lead to unexpected results. 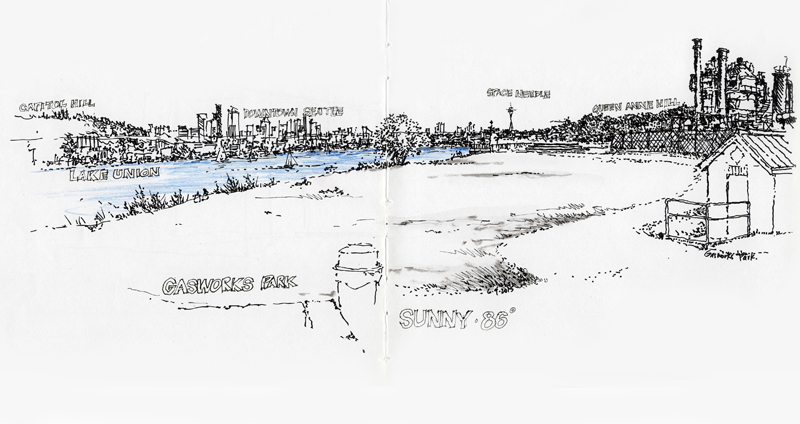 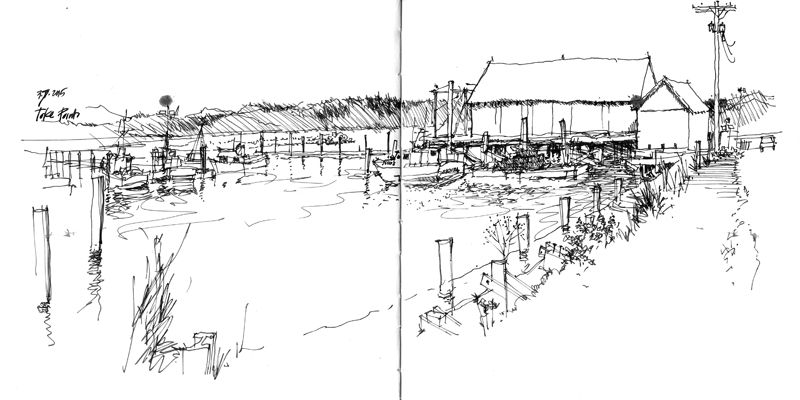 I have always preferred taking photographs with a wide-angle lens—a 35 mm, 28 mm, or even a 24 mm fixed lens. This preference shows up in the views I usually select when drawing on location. My inclination to include context and information in my peripheral vision often leads to panoramic views or perspectives that stretch beyond the classic 60° cone of vision for linear perspectives. 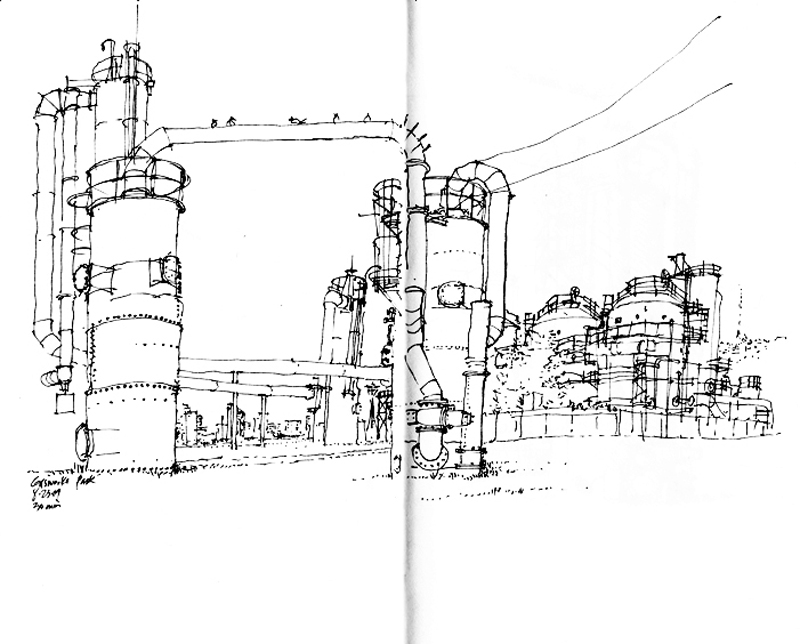 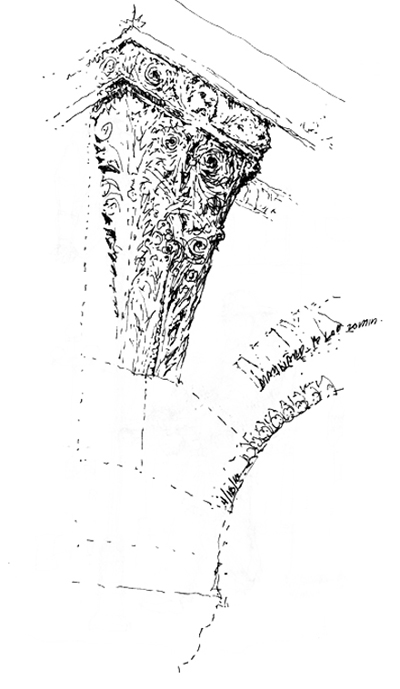 Some photographers prefer the more tightly composed shots made possible with telephoto lenses, which can be seen in how they might frame and compose their on-location drawings.

For those who prefer the flexibility of a zoom lens, the choice of subject matter can suggest how it is to be framed, whether it is a panoramic cityscape or a tighter close-up of a building fragment.

Amid a lot of controversy, the Royal Dutch Shell oil rig Polar Pioneer docked recently at Terminal 5 in Seattle to be fitted and supplied for oil exploration in the Chukchi Sea off Alaska’s northwest coast. When the 400-foot-long vessel arrived after a 12-hour journey from Port Angeles on the Olympic Peninsula, it was met by by environmental activists in kayaks and on shore protesting the proposed drilling in the Arctic ecosystem in general, and more specifically, the presence of the oil rig in Seattle.

A month after attending the 6th International Urban Sketchers Symposium in Singapore (See http://singapore2015.urbansketchers.org), I will be joining Norberto Dorantes, Simone Ridyard, and Climaco Cardenas in conducting a series of workshops, offering demonstrations, and leading sketch crawls in Amsterdam and Liverpool over two long weekends, August 13–23. For more information about the schedule of events and registration, please visit http://www.sketchiton.com.

And finally, to cap off the summer, Gail Wong and I will be teaching another Line to Color workshop in Portland, Oregon, September 25–27. To find out more about this event, you can email Gail at gail@glwarc.com.