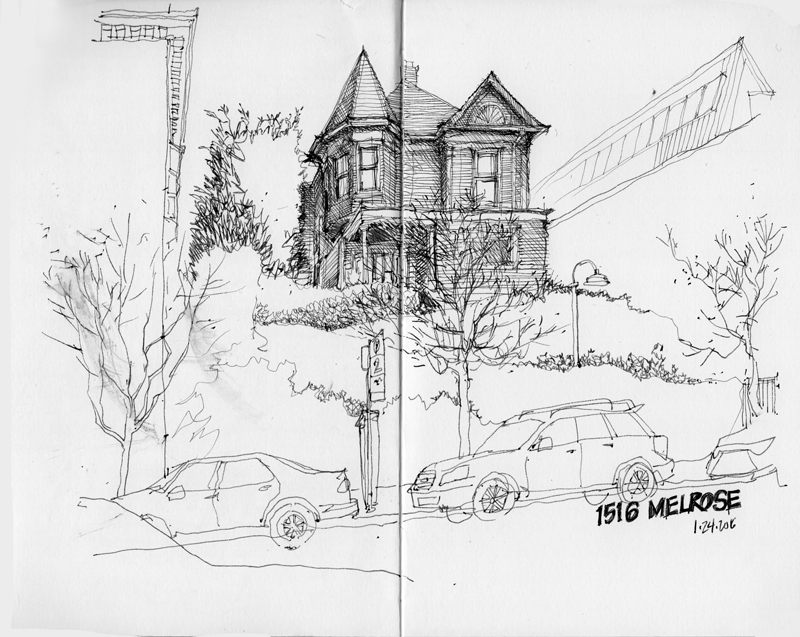 During the last Seattle Urban Sketchers meet-up in the Capitol Hill neighborhood, this particular view drew my attention because of its strong gestalt of a dark house, reached via a series of paths zigzagging up an ivy-covered slope. There appears to be a force field that is repelling the apartment building to the north and a remodel to the south. How much longer will the force field hold up against the forces of development? 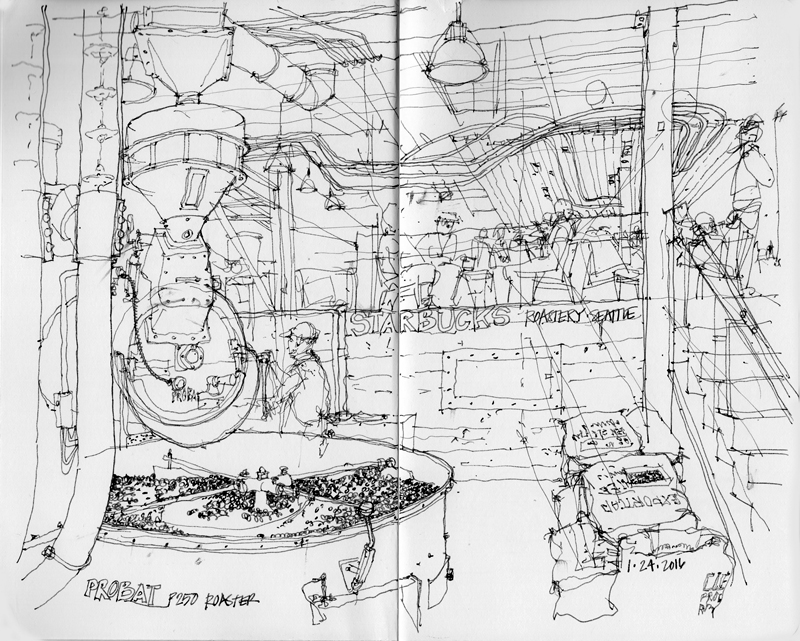 An entirely different type of view is this busy interior of the Starbucks Reserve Roastery and Tasting Room, featuring the Probat P Series solid drum roaster. 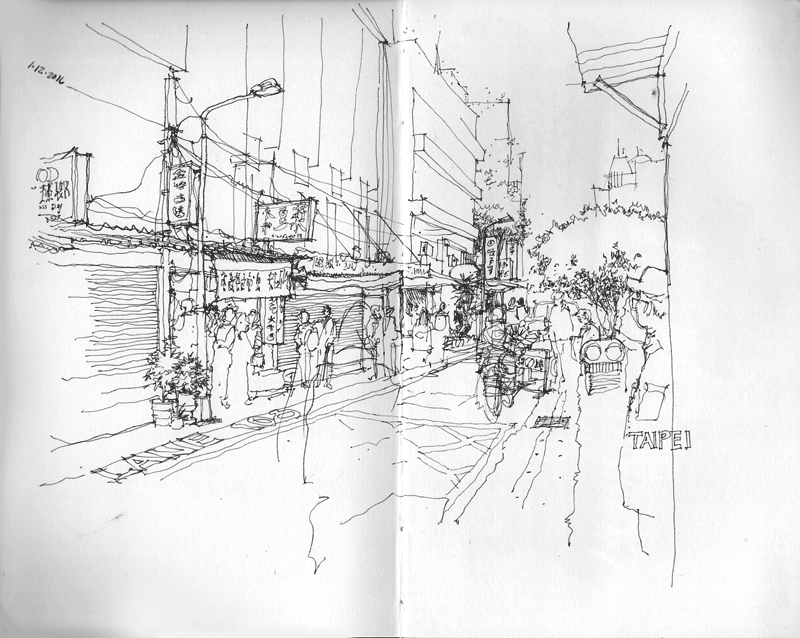 After my visit to Dhaka, I headed to Taipei for another series of workshops with students of the National Taipei University of Technology (NTUT). In Taipei as in other cities there is a hierarchy of right-of-ways, from the relatively narrow “lanes” connecting wider “streets,” which, in turn, lead to broader “roads” that we might call avenues or boulevards. The day after I arrived and before the workshops started, I drew the view above of Lane 108 near my hotel. 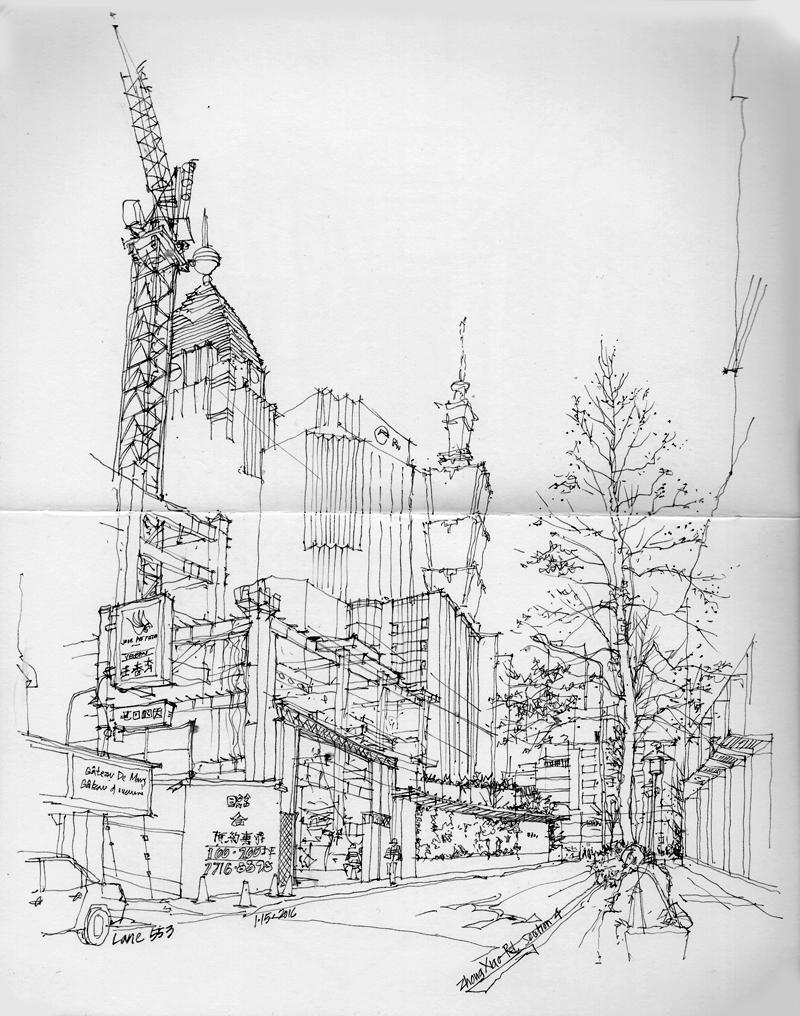 This view, also down a lane, drew my attention because of the way it layered the old and the new, with Taipei 101—the world’s tallest building from 2004 until 2009, when the Burj Khalifa was erected in Dubai—rising in the background. 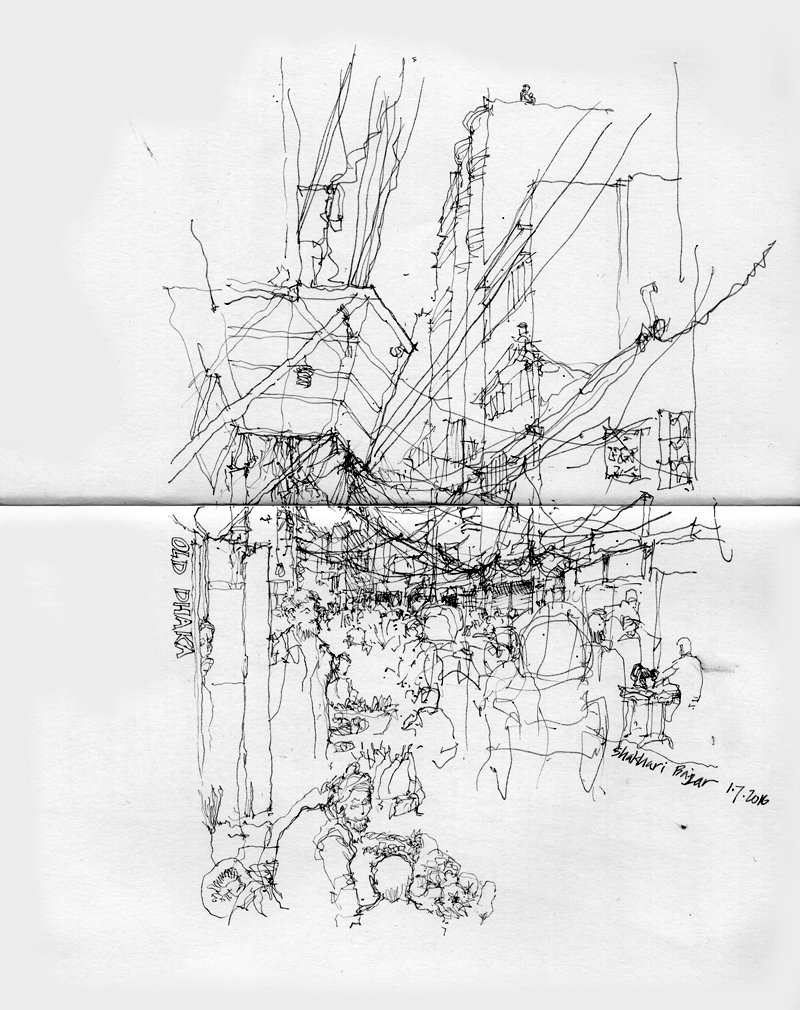 It’s interesting to compare the street views of Taipei with two I drew in Dhaka. In contrast to the relative orderliness of Taipei, we have the “informality” of Dhaka. But as one Bangladeshi told me: “Within the informal, there is the formal.” Shakhari Bazar is typical of the narrow lanes in Old Dhaka, lined with vendors and shops and flooded with pedestrians and rickshaws streaming through in both directions. Thanks to Professor Abu Shajahan and Sumaiyah Mamun for showing me around this historic district. 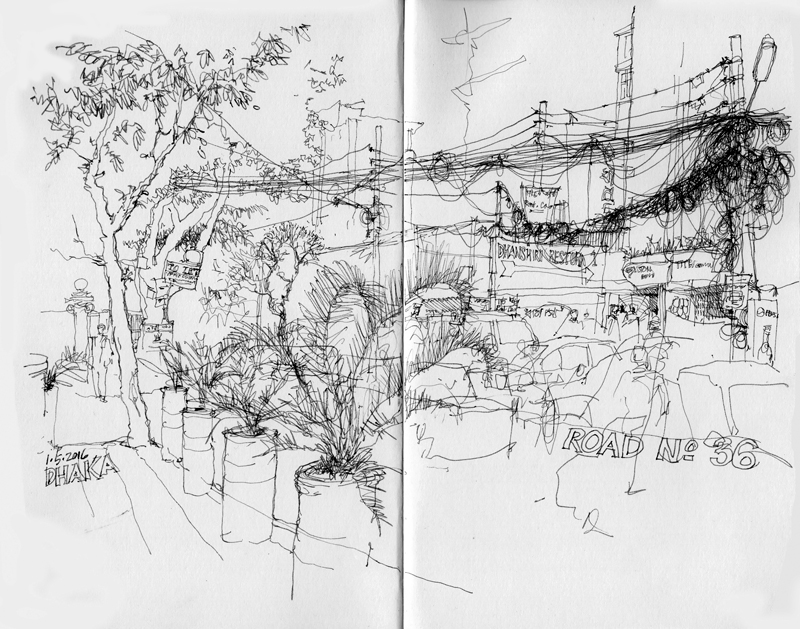 I drew this view to record a recurring sight along the streets of Dhaka, the large bundles of cables and wiring that carry electricity and communications to buildings.

Gail Wong and I will be teaching another in our series of Line-to-Color workshops in Seattle April 22-25, 2016. For more information about the schedule and registration process, please email Gail at glwarc at gmail dot com. 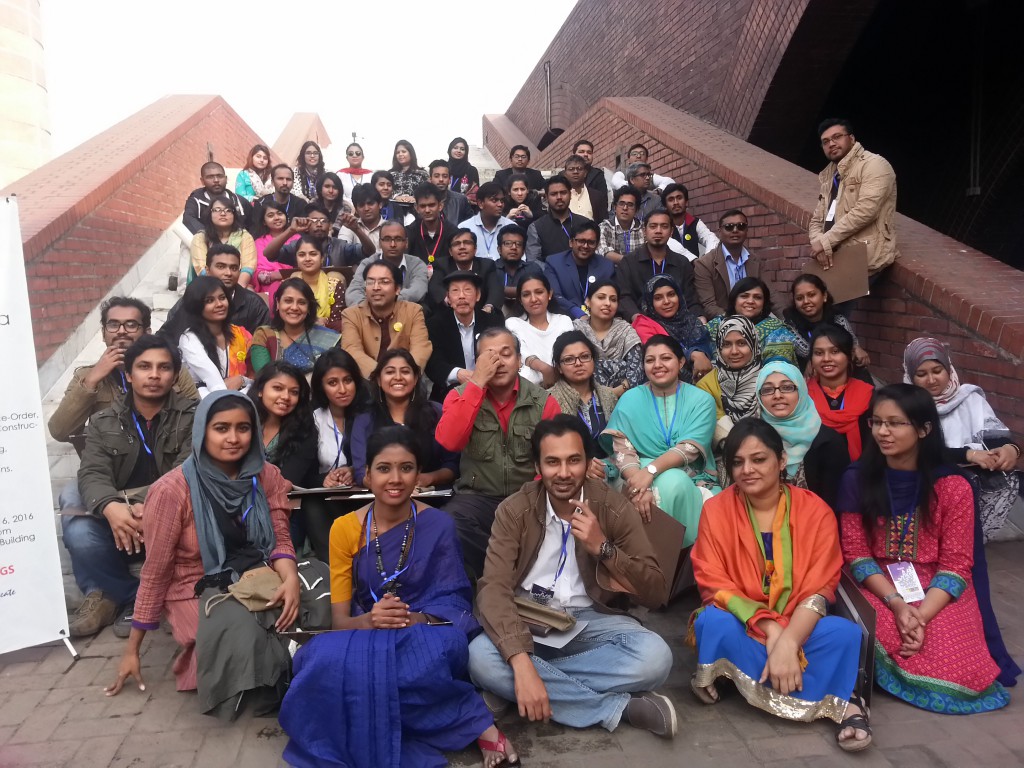 I want to thank Saleh Uddin, Arefeen Ibrahim, and the faculty, staff, and students of the Department of Architecture at American Internarional Universuty-Bangladesh for their warm welcome in Dhaka. In addition to giving a presentation during AIUB’s 10 year anniversary festivities, I had the pleasure of hosting a workshop one afternoon at Louis Kahn’s National Assembly Hall. Here are a couple more photos of the event (Thanks to Professor Ibrahim) and a few pages of explanatory sketches from my sketchbook. 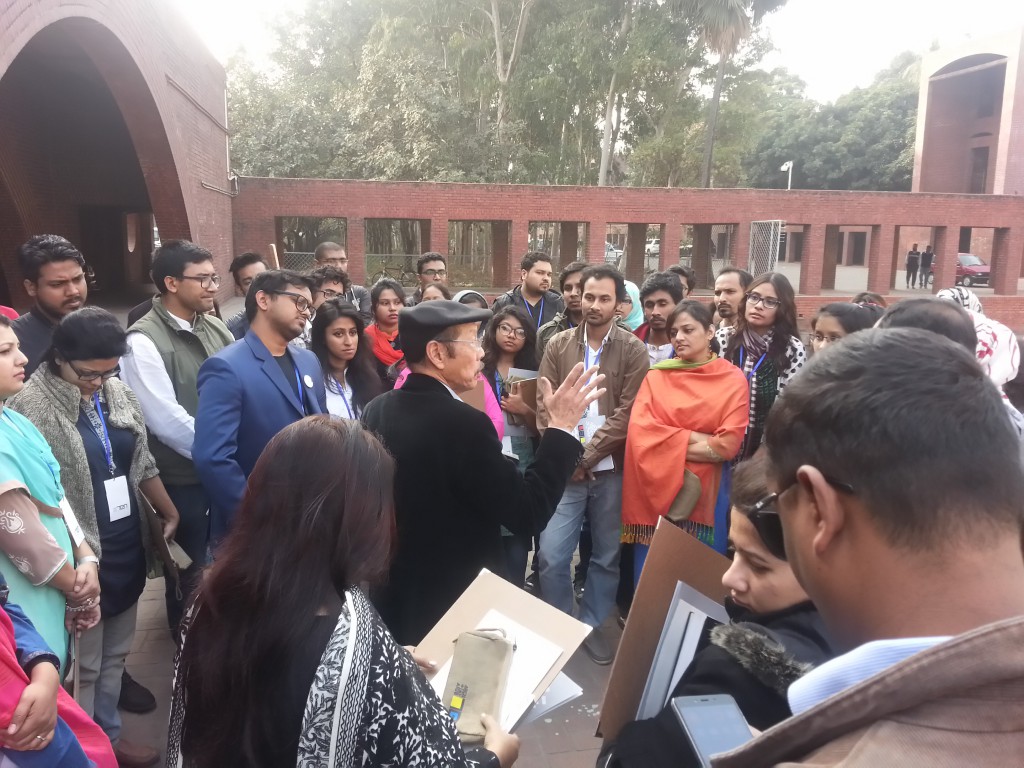 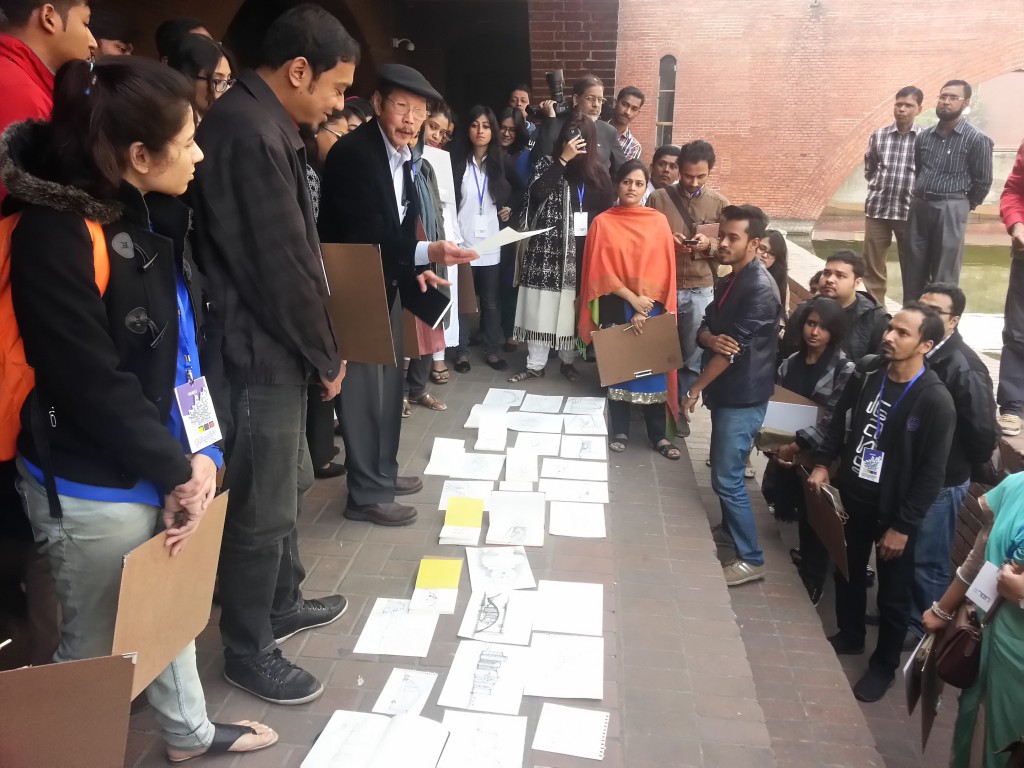 Thanks to Professor Ibrahim for the photos. 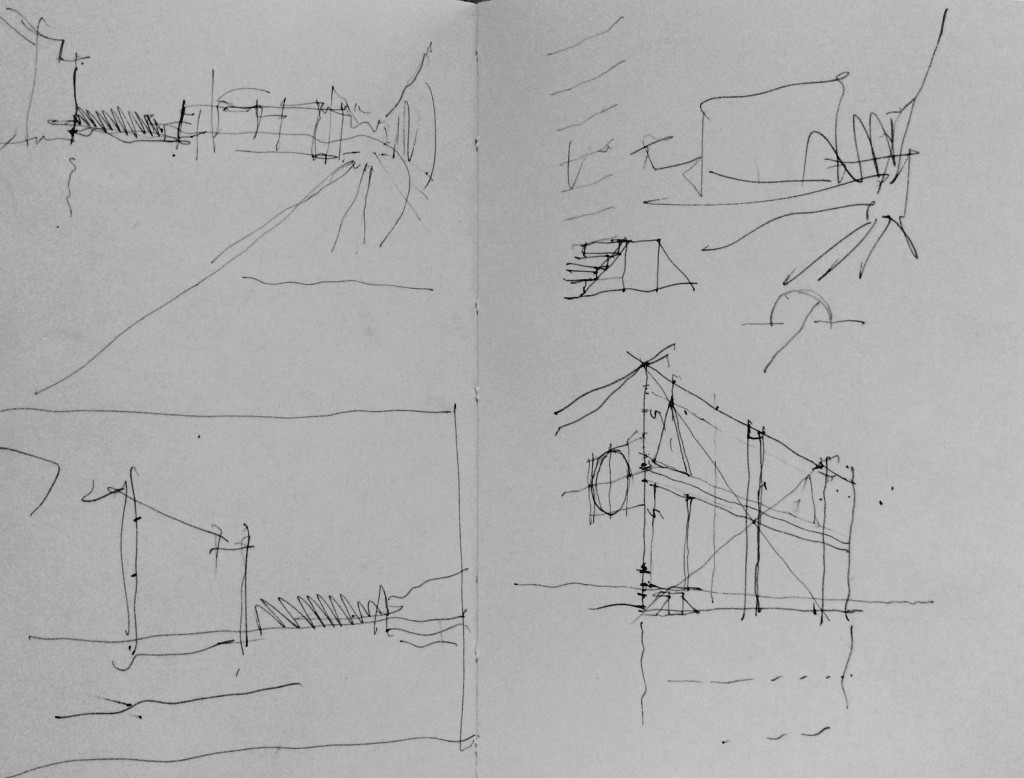 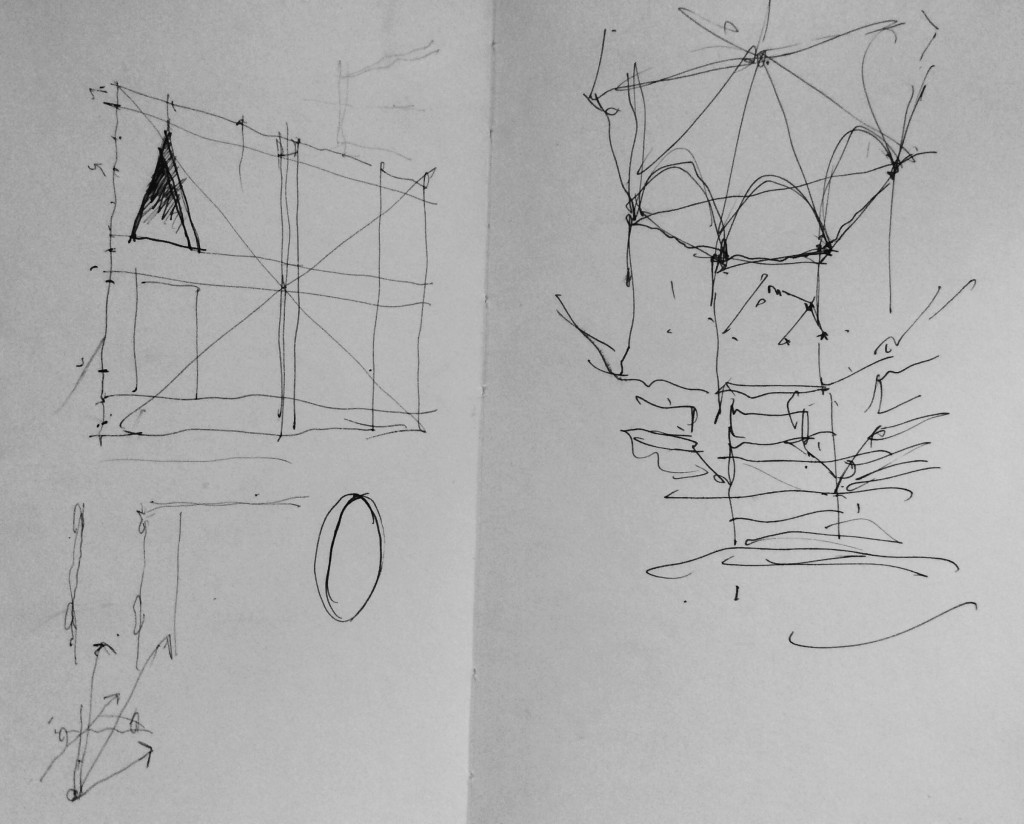 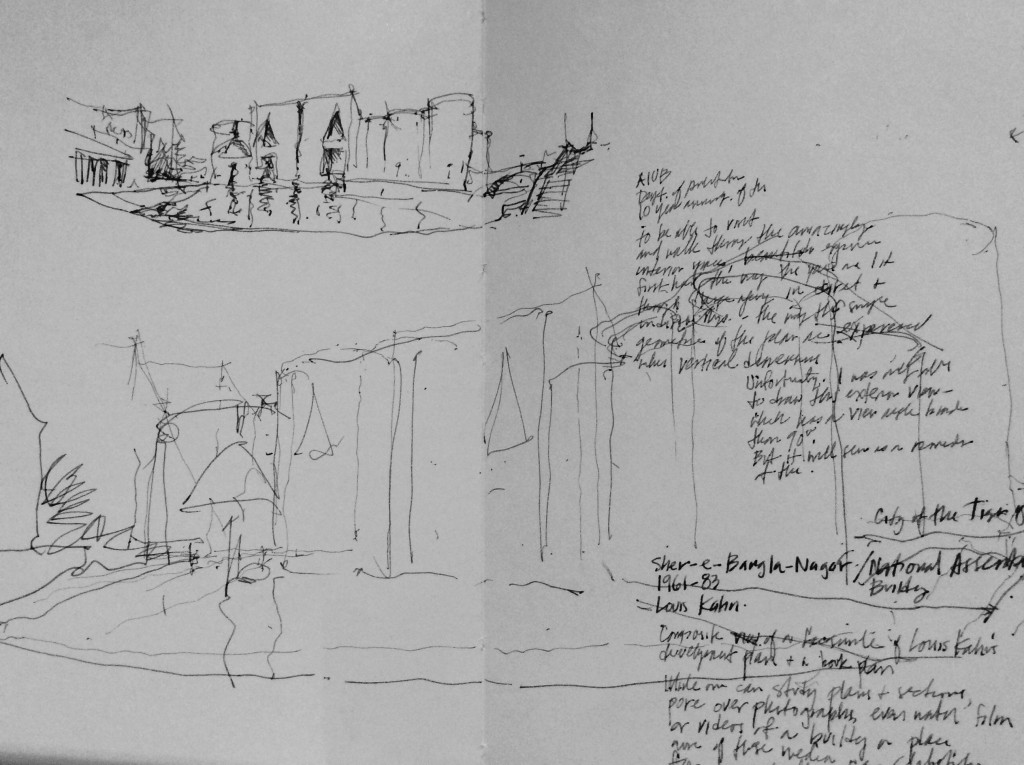 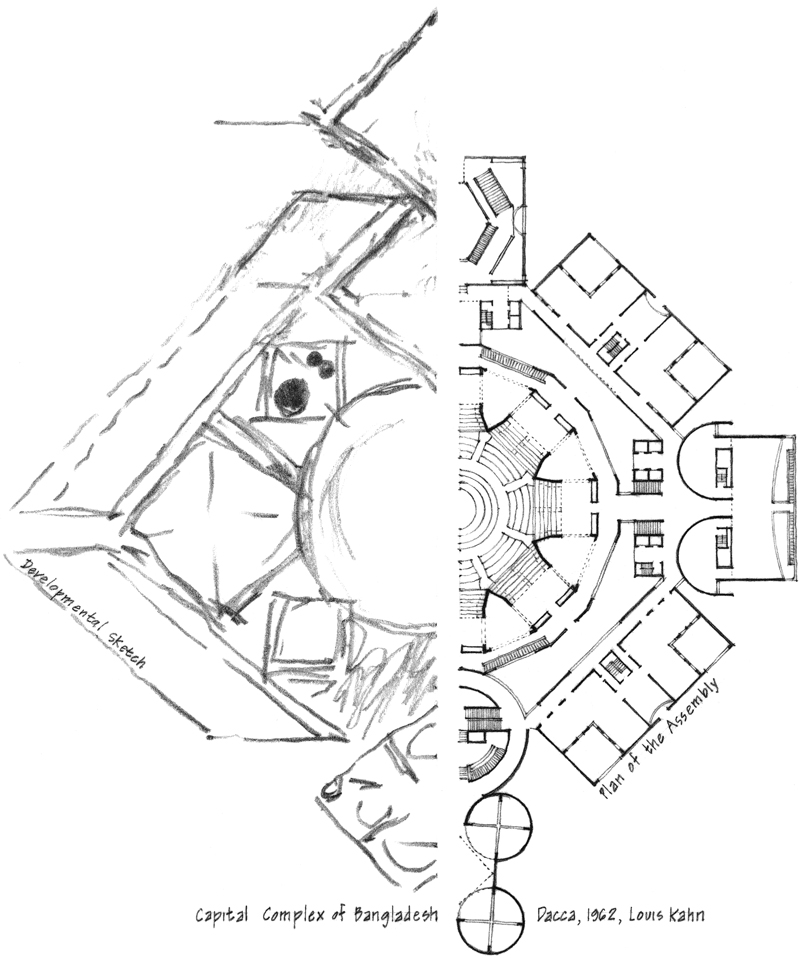 The above is a composite of Louis Kahn’s plan idea for the National Parliament Building in the Sher-e-Bangla Nagar district of Dhaka, Bangladesh, and a more finished plan of the assembly hall level.

While we can pore over plans and sections, study photographs, even view film of a building or place, none of these media can replace the experience of actually being “there.” And so it was a real pleasure to be able to visit Kahn’s last work while in Dhaka to participate in the 10-year-anniversary festivities of the architecture program at American International University Bangladesh.

Even though I did not have the time to sketch as we toured the interior of the complex, I can still recall how Kahn extruded the simple geometric plan shapes in the third dimension and then used large cutouts in the planes to create the daylit layers of space. 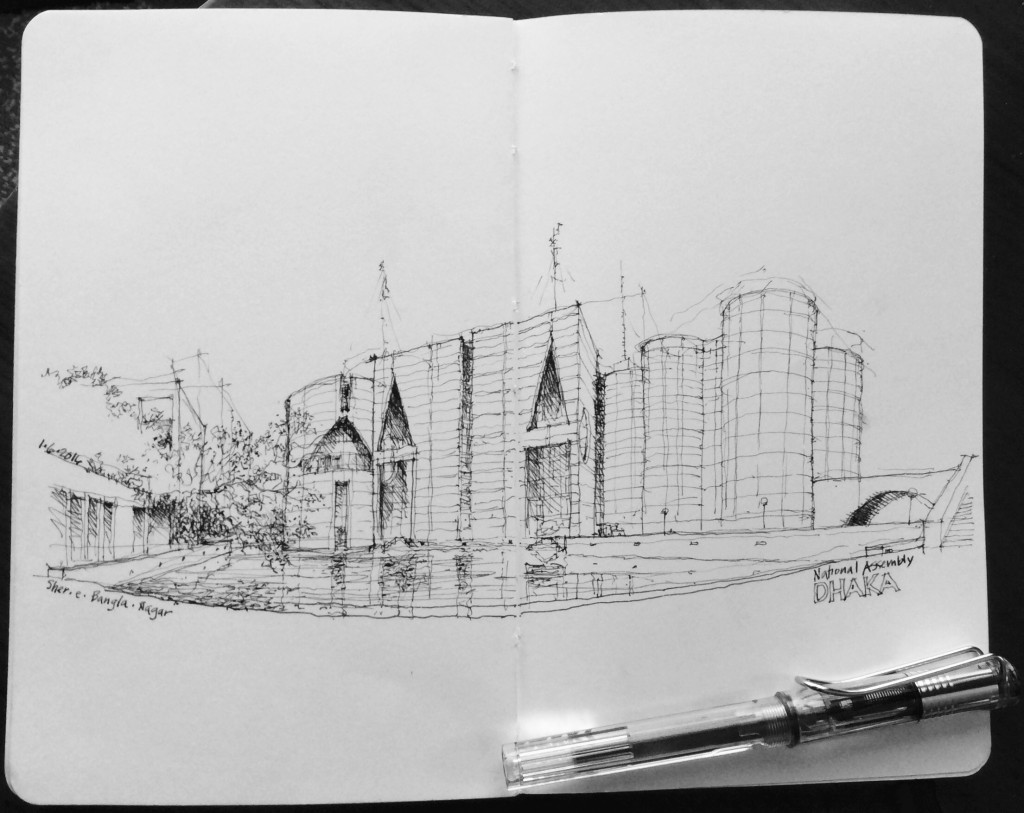 This is a wide-angle view of the exterior. I broadened the viewing angle beyond 90 degrees so that I could convey a greater sense of how the complex floats on a pool of water, reflecting the riverine nature of the country.

Wishing Everyone Good Health, Well Being, and Prosperity in 2016.